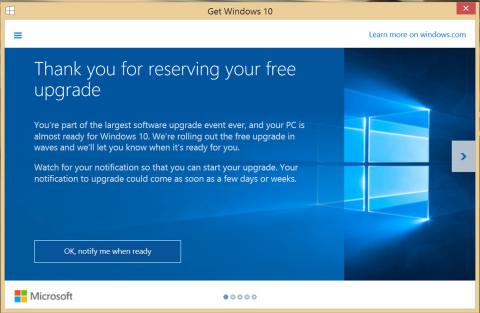 Curious what to expect when upgrading a PC to Windows 10? Follow along as we test out upgrading an Aspire S7 Ultrabook from Windows 8.1 to Windows 10. By James E. Gaskin
Tweet

"Windows 10 free upgrade!" That's been the line from Microsoft for months now, and since July 29, 2015 has come and gone, we decided to test the upgrade process and see what happens. We used an Aspire S7 Ultrabook courtesy of the nice people in the Acer PR department for our test. If it blew up, better to blow up on someone else's PC than ours. 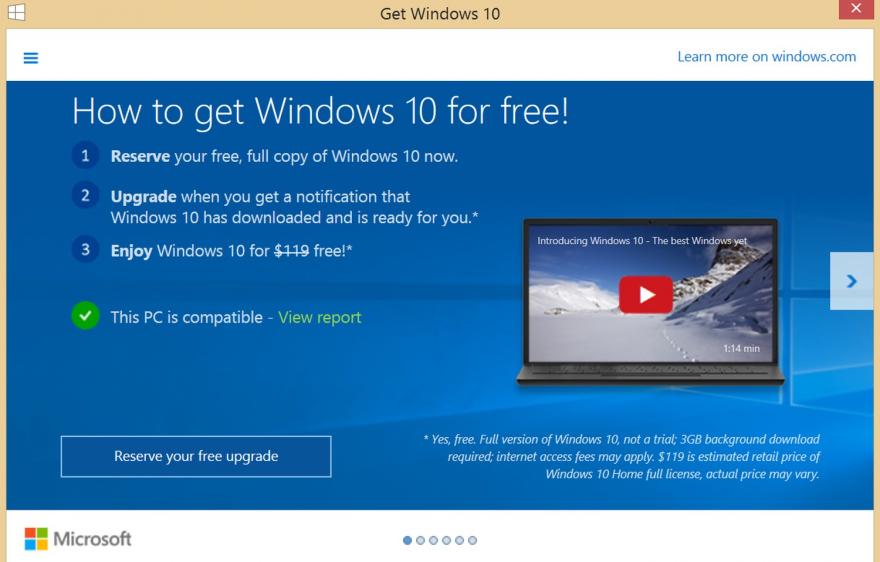 But, happily, all went just as well or better than any Windows update we've ever seen. Kudos to the Richmond folks for the update. We'll address the value of Windows 10 as an operating system at a later time.

The download file size is said to be about 6GBs. That's a bunch of update. The good news is that by asking to be part of the upgrade early on, some or all of that 6GB may have already download in the background. Alternatively, you can download the bits to make a bootable ISO or bootable USB drive and upgrade from that. If you go that route, make sure you start the upgrade from within your existing installation the first time. After that, you can blow away the disk and reinstall from scratch at will.

We didn't have the loaner laptop until the week of testing, so we didn't have that chance. We pushed the issue by clicking the little white-paned Windows icon on the far right side of the Task Bar and clicked "Go to Windows Update." 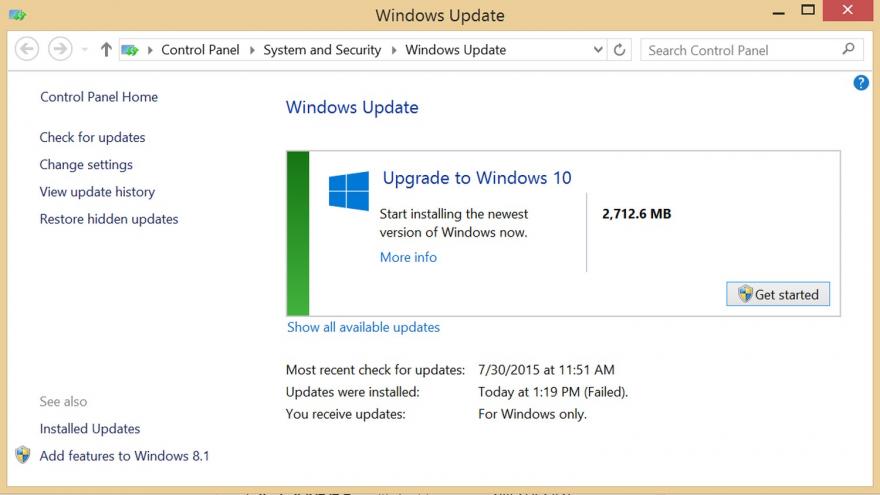 That started the ball rolling and the files downloading, but our wireless connection flaked out after a while (we can't say exactly why). But we had 2.7GB of download by then, which the upgrade software said was 38 percent complete. 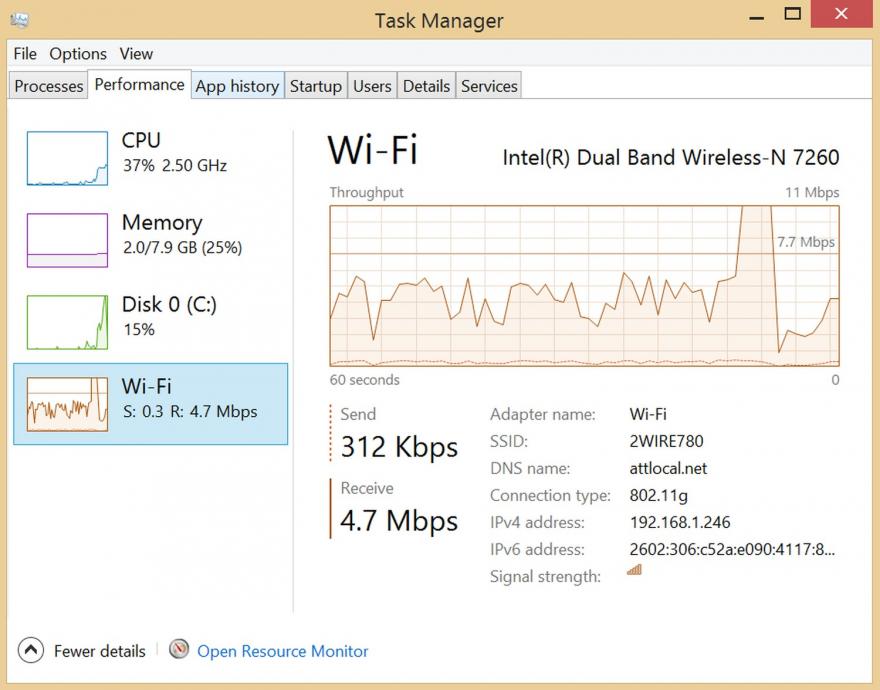 Our Wi-Fi monitor in Task Manager had been pulled down between 3-5Mbps for a while by then. When the download dialog declared failure we kick-started it again. We started getting 4-6Mbps throughput then, and the download percentage finally crawled up to 99 then bingo – Preparing for Installation said the dialog box. 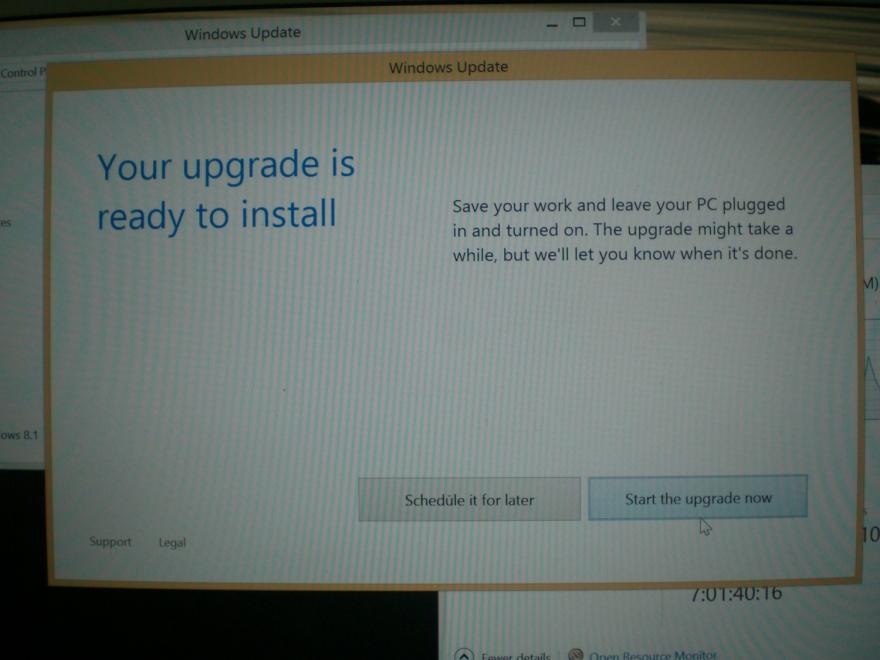 Now unable to do screenshots because we'd read about issues upgrading virtual Windows installations, we resorted to the oldy but goody 'digital camera aimed at the screen' approach. "Start the upgrade now," said the button, and we clicked it and did.

The big EULA (End User License Agreement) came and we clicked through it so we wouldn't be tempted to see how badly were gave away our privacy and personal details. That information showed up later, however.

"Your PC will restart several times. Sit back and relax." Yes it did, and do did we. 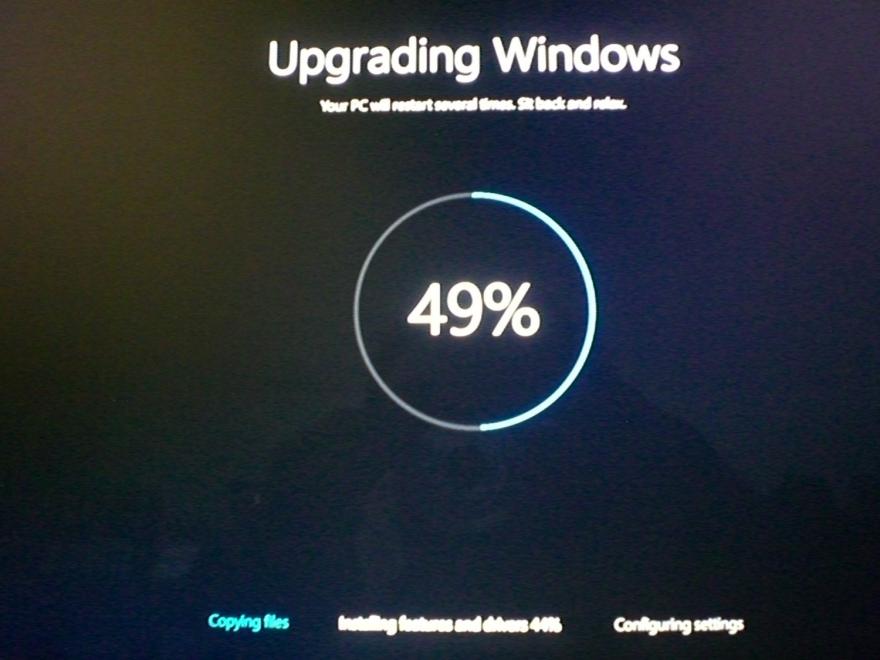 We've never seen this upgrade look before, but it did work and wouldn't require too much graphic system installation to display. On the bottom, the "Copying files" is finished, signified by the color change to blue. "Installing Features and devices 40%" isn't clear in the image, but clearly told us our progress. After about 75 percent, the "Configuring settings" display brightened and we knew we were closer to our upgrade goal.

Remember those privacy details we mentioned earlier? Once the system configuration started, we learned how little privacy means anymore. On a text-heavy screen, Microsoft suggested we use the Express Settings. Seems like it saves time, right? It also gives Microsoft some rights you may not expect.

"Windows and apps can request your location."

"Microsoft can use your advertising ID to 'personalize your experience.'"

"Browsing data will be sent to Microsoft to help protect you from malicious content."

"Diagnostic information 'will be sent to Microsoft.'"

You can choose to "customize" settings, meaning turn off many of these choices. Since this wasn't going to be our computer, we left them all on except for the one saying, "Send typing and inking data to Microsoft to improve the recognition and suggestion platform." In other words, send Microsoft every typo and touch-enabled pen stroke that didn’t work so they can make the software work better next time. At least we hope that's all they plan to do with that information.

More? Microsoft worries about browser protection, wants to automatically connect to open hotspots, also wants to connect to networks shared by your contacts (part of the new Wi-Fi sense feature that sounds scarier than it actually is), and send errors and diagnostic information to Microsoft.

We saw a little blurb about some of the new apps Windows 10 adds, then Clippy appeared (at least it seemed like it), and started saying positive things.

"We're setting things up for you."

"Taking care of a few things"

All the while, the blue background for the white letters kept getting lighter and darker. Subtly, like it didn't want us to fall asleep, but it didn't want to actually say anything.

After a few more reboots and restarts, a new desktop appeared. We were upgraded to Windows 10, and it looked pretty good. 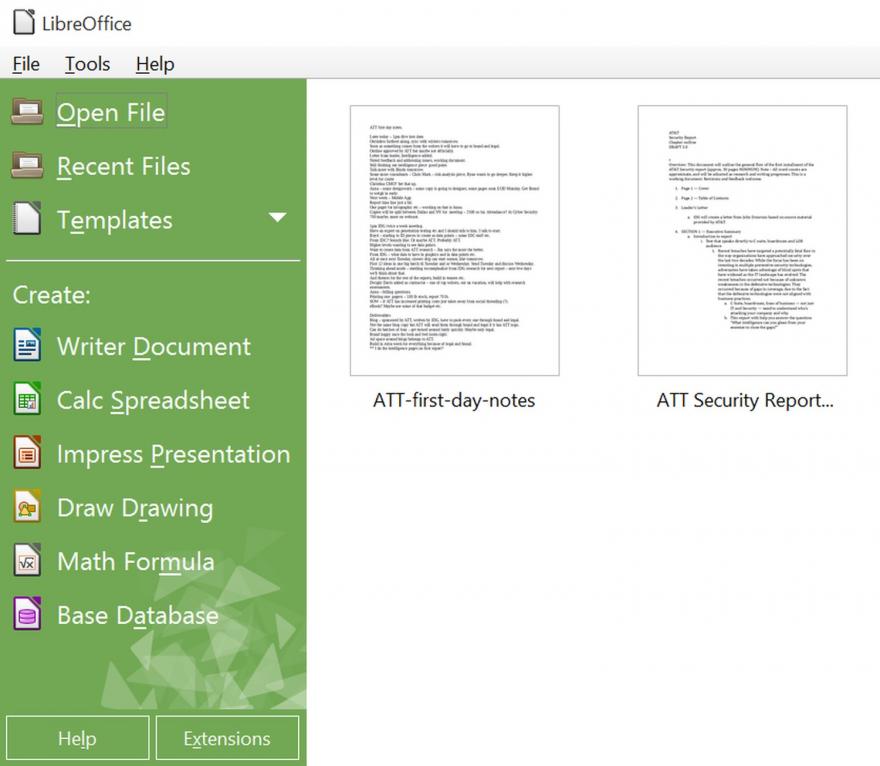 Everything seemed to carry over: our Wi-Fi passwords, browser settings and stored password, document locations, and all the rest. LibreOffice transferred fine, and the recent documents still popped up when requested.

The big news for many people is the new Microsoft Edge browser, supposedly a complete rewrite from the old Internet Explorer. IE remains for those companies who short-sightedly (or stupidly) wrote programs relying on proprietary IE features and code.

The Task Bar across the bottom has changed a bit. The fun part is on the bottom left, where a start menu has reappeared. It even works pretty much like the old versions of the Start button, although the Tile apps clutter up part of the start menu area. At least they don't flop over to a special desktop anymore. But that's enough about Win10 itself.

Except for one detail: an alert popped up about "Wi-Fi Sense." It wanted to "automatically share" Outlook.com, Skype, and Facebook friends. Can you say, "Annoy all your friends?" We knew you could.

The actual upgrade was pretty much, "Enter, Enter, Enter," once it all got going. And when done, Windows 10 and the upgrade process seemed worth the time and effort.