What's the Future of TelePresence? 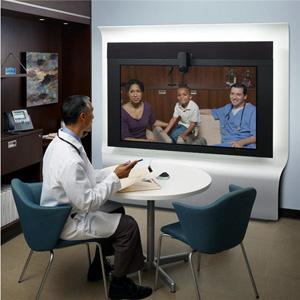 Cisco's TelePresence system seems to be making headlines every few months. The most recent news--that a single-screen, single-camera solution will join its TelePresence line--comes after a June announcement that it struck a big payoff partnering with AT&T and Marriot International.

Cisco honored AT&T with its 2009 Managed Services Partner of the Year award after the communications provider inked a deal for TelePresence suites in 25 cities around the world.

Marriot locales in New York, San Franscisco, Washington, and Hong Kong among others, will all be fitted with the video conferencing technology. AT&T will manage the services for Marriot.

Marriot's president and COO Arne Sorenson believes video conferencing will be growing rapidly in the coming years. He says this will lead to an increase in the number of day meetings his company hosts. "We believe TelePresence will create more business meetings because people can travel shorter distances," he says.

In August, Cisco released its fiscal fourth-quarter earnings. They weren't pretty. The manufacturer reported large, sequential declines in profits and revenues. But here's the thing: Cisco's TelePresence line saw a 97 percent increase in revenue for the fiscal year. Clearly, it's a product that has market value.

The latest member of the TelePresence family uses a standard 65-inch plasma that can double as a presentation monitor or digital signage display.

Along with the announcement of the 1100 model came Cisco's summation of the platform's standing thus far in terms of wide-ranging support.

The service providers, AT&T, BT, Orange, NTT, Tata Communications, Telefonica, Telstra, and most recently Telmex, have announced commercial intercompany Cisco TelePresence services, Cisco announced. "This has enabled more than 350 organizations that have already selected Cisco TelePresence to communicate reliably and with high levels of security and across different networks," a company statement read.

GEOFFREY OLDMIXON is a Massachusetts-based business and technology writer.

Top 5 VoIP Trends to Look Out for in the Years Ahead
December 9th, 2019