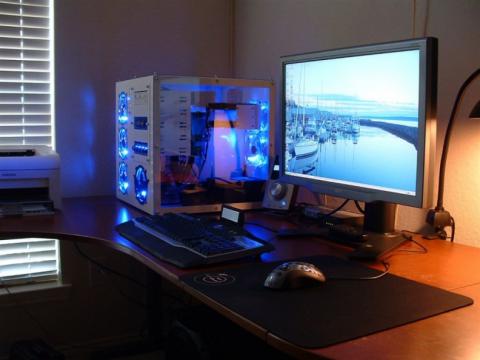 The market for crafting customized computer cases---modding---is both worldwide and lucrative, but creativity and craftsmanship are key. By Hank Hogan
Tweet

There’s gold in them cases—perhaps literally. As a result, modifying shells, or case modding, can yield system builders new revenue. Exploiting it, though, demands artistry as well as technical expertise. It also helps to have gear and peripherals to sell.

Case modding can be defined in different ways, says Ben Rising, the owner of Eugene, Ore.-based Mountain Mods. “A case mod can be something as simple as the installation of an additional fan to introduction of lighting into your computer case. Obviously case modification can be taken to serious levels of cutting or hacking, exotic case finishes, themed rig builds, and so on.”

Mountain Mods produces and resells water-cooling radiators, tubes and fittings, along with fans, lighting, and modification tools, Rising says. He adds, though, that the primary case modification business that the 10-year-old company engages in involves custom designs from the ground up. This can be through the use of uniquely designed cases that, thanks to the ability to interchange panels, can have thousands of configurations.

Rising’s advice to those interested in case modding is to look around. This could be done by frequenting forums, browsing the user gallery at MountainMods.com itself, or other online sources. Other avenues are LAN parties or shows.

Bill Owen, owner of Minneapolis-based Mnpctech, says his 12-year-old company differs from a traditional system builder because it sells and makes parts for people who want to customize computer cases. With most made on-site from machined aluminum, those products allow a range of case-modifying options.

“Those parts include custom fan grills, radiator grills, custom case feet, handles, light switch panels,” Owen says. “You can customize your gaming rig or whatever.” Years ago, avid gamers started overclocking processors, which meant cooling had to be beefed up, he says. Adding fans was one way to get rid of excess heat, and so case modding was born.

Form over Function
Over time, what began as a quest to keep components from frying evolved into something driven by aesthetics. It’s analogous to what’s done to customize cars and motorcycles, where looks are key. The drive to achieve a certain appearance elevated the importance of artistry in case modding, according to Owen.

The cost of a case mod or a custom case can range as high as $30,000. However, there is no average cost and no standard list price because no two cases or projects are identical. “Every one is different. We don’t ever do the same one again,” Owen says, noting that the customized nature of case modding is part of its allure.

That appeal is worldwide, with case modification popular in Europe, South America, and elsewhere. For instance, Owen’s company sees significant sales originating from Spain and Brazil. Although a niche, the global reach of case modding means there’s quite a bit of money to be made.

The market for modifying cases in the United States has changed since the early days, Owen says. Increasingly, the field has gone commercial. A game company, for example, may seek to draw attention to its latest offering by commissioning a case mod or even a custom-built case. Standing out from the crowd can be helpful at big trade shows, where plenty of new products vie for attention. “In the last few years, [game companies] realized that having a really customized PC using their product draws in the media and the public,” Owen says in explaining the reasoning behind this marketing approach.

A triumph in this or other case-modding arenas will spill over into other areas. Other companies and hobbyists, for example, may see a case at a trade show and then seek out the supplier for specialized gear, case modding, or even custom cases.

That happy picture hides a challenge, however. It’s no longer enough to achieve performance success. The case mod also has to look good to the intended and potential customers. Pulling that off requires a particular skill set.

As Owen says, “We’re all artists. It’s a lot of fabrication by hand. You have to have vision.”

Jabra PanaCast Review - Get Your Huddle On
END_OF_DOCUMENT_TOKEN_TO_BE_REPLACED