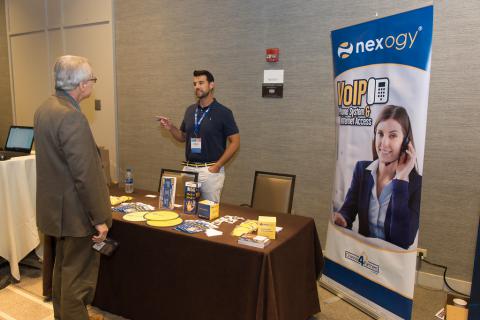 MSPS WANT TO DO BUSINESS with a partner that has the least amount of “mess with” factors, says Brian Asher, director of channel sales at VoIP and UCaaS provider Nexogy. That’s a strong suit of Nexogy’s, he continues, which has a cloud-based solution that’s easy to implement and a back-end system for billing and operations that’s easy for partners to work with.

Called DNA, the platform enables partners to add additional services to the Nexogy bill and collect 100% of the revenue. This includes one-time charges like cabling, PoE switches, and headsets, as well as monthly recurring charges such as technical support, web hosting, and cybersecurity. “Our system, designed in-house … is so good that we actually sell it to some of our competitors,” Asher says.

Another differentiator is Nexogy owns and operates the technology behind the scenes so has full control of the quality.

A player in the Florida market since 1999, Nexogy is on the move as well, expanding throughout the U.S. Asher came on board at the end of 2018 to hire a team and lead that growth. Nexogy now has a presence in Denver, Colo., the greater Washington, D.C., area, and the greater Nashville area, with more markets to come.

Nexogy also rolled out its collaboration tool in the first quarter of this year, and Asher says partners can expect a new feature in DNA in the fourth quarter that will allow them to show taxes and fees on a contract.

In addition to VoIP/UcaaS, Nexogy offers managed firewall and SD-WAN, internet services, and contact center solutions. Nexogy is 100% channel and has 1,200-plus partners; average seat per end-user account is 13. Price per seat is $17.99.

Partner program benefits include up to 5X commissions, 15-day installations, a free CRM system for quoting, and an evergreen residual commission.

“MSPs like us, because it's a simple implementation, it's easy to understand, it's easy to implement,” says Tom Graham, national channel manager for the greater Southeastern region. Or as Asher would put it, no “mess with” factors.

LG Gram for Business 17 (2020): Big Reasons to Like It
END_OF_DOCUMENT_TOKEN_TO_BE_REPLACED