Using Tablet PCs for Business: How They Stack Up 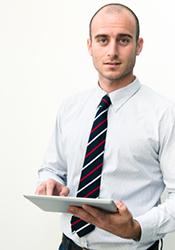 Virtually unknown a year ago, sales of iPad-style tablet PCs have exploded. But while promising, business applications and channel opportunities lag behind the hype. By Lauren Gibbons Paul
Tweet

What a difference a year makes. Little more than 14 months ago, tablets were on the radar of very few. Sure, they were used in heavy-duty applications delivery, logistics, and healthcare, along with a handful of other business applications. But consumers didn’t know from tablets. Then, the Apple iPad burst upon an unsuspecting world, becoming an overnight sensation, and the rest is very speeded-up history.

Unlike their industrial counterparts, consumer tablets generally aren’t full-fledged computers with a PC-style operating system. Instead, they use a simplified operating systefICm such as Apple’s iOS, Google’s Android, or Palm’s webOS. Besides Web browsing, consumers use their tablets for multimedia applications such as listening to music, watching videos, updating social media, reading e-books, and playing games.

Today, tablets like the iPad are the hottest PC form factor around, and just about every hardware manufacturer is making one. Tablets generated the most buzz at the Consumer Electronics Show (CES) in January, with a rumored 30 to 50 new tablet introductions. (Though with CES hype being what it is, it is unclear how many of those new products will ever see the light of day.) Research firms like IDC and Forrester Research Inc. are revising their tablet revenue forecasts upward, and there seems to be no end to the growth in sight.

Last September, for example, IDC forecasted 13.1 million tablets would be sold worldwide in 2010, growing to 57 million worldwide by 2014. The research firm revised the 2010 figure in a report published in January 2011, to nearly 17 million units, and forecasts 44.6 million will ship in 2011, with the U.S. representing nearly 40 percent of the total. In 2012, worldwide shipments will rise to 70.8 million units.

Forrester also just revised its U.S. consumer tablet forecast for 2010 upward to sales of 10.3 million units, and analyst Sarah Rotman Epps expects that number to more than double this year to 24.1 million units. Perhaps not surprisingly, there will be a clear tablet leader: “We see Apple commanding the vast majority of the tablet market through 2012,” she says.

That hasn’t stopped Acer, Dell, HP, Lenovo, Samsung, Sony, and Toshiba (plus lots of unknowns) from throwing their virtual hats into the tablet arena. By 2015, Forrester estimates 82 million U.S. consumers—one-third of all U.S. online consumers—will be using a tablet, and not all of those will be iPads.

The glut of companies entering the tablet space—evidenced by all those CES announcements—will drive down prices, says David Daoud, IDC research director, which in turn will drive up demand, at least among more cost-conscious consumers who could not swing $500-plus for an iPad. “It won’t take too long before you see that number drop below $300,” says Daoud, especially as carriers begin to offer subsidized models, as they did with cell phones. “Tablets used to be for elite consumers; now they’re going mass market,” he notes.

Tablets and the Channel

With all that good news, tablets should be the premier opportunity for channel partners this year, right? Not so fast. Generally, the channel does not do much work with consumer computing devices. And the business-use cases for the new-breed consumer tablets have yet to emerge. Many channel pros say they have seen only modest interest among their clientele, and don’t know when that will change.

In the last year Eriq Neale has had a few tablet-related requests from his clients. One was from a doctor’s office that was implementing a new medical records system. “They wanted to use tablets for the doctor and his assistant to take notes when seeing patients, as opposed to having dedicated workstations in the patient exam rooms,” says Neale, owner and senior technology specialist at EON Consulting LLC, in Denton, Texas.

A restaurant client of Neale’s is looking at giving the wait staff iPads to take customer orders and process credit card payments right at the table. And a parts distribution business has moved to an online accounting/inventory system that it expects several of its salespeople will start accessing via iPads. These indicators could be a sign of lively tablet business applications to come over the next year or so. In the meantime, Neale is watching the situation closely, ready to ramp up if and when customer demand warrants.

Another channel partner, Arlin Sorensen, has not seen much client interest yet. “We don’t do a lot with tablets,” says Sorensen, CEO and partner, Heartland Technology Solutions Inc. of Harlan, Iowa. “I do expect they will grow in importance for our company as new offerings come out, especially from HP.”

Certainly, it is far too early for channel partners to discount tablets altogether. Ruggedized commercial tablets have been used for package delivery, warehouses, in hospitals, and by law enforcement for decades, but iPad-style consumer tablets for business use are just beginning to emerge. As always, channel partners will be called upon for advice on how to integrate tablets into clients’ computing environments, or how to secure the devices. And smaller OEMs trying to get a piece of tablet action will need to leverage channel partners to get up and running.

“Not everyone has the go-to-market capabilities of an Apple or an HP,” says Daoud. “You will have the need for resellers to support this space. Reaching out to SMBs is not an easy task, so they will need the channel to be part of that.”

One factor contributing to the heady growth picture: In Rotman Epps’ view, tablets are “lifestyle” devices, more akin to a smartphone than a computer, though sharing attributes of each. (See related story, “What, Exactly, Is a Tablet?”) As such, consumers will replace them more often—a hypothesis that is about to be tested with the expected introduction of the next-generation iPad this month. Rotman Epps expects many first-generation iPad users to upgrade.

So, if these devices are more consumer-oriented than business-oriented, where do the opportunities lie? The tablet outlet is highly promising for channel partners that have the ability to design and deliver applications and content for the consumer market. “If you already serve consumers, that bodes well for your tablet opportunities,” says Daoud. There is a lot of opportunity in the “prosumer” market via applications designed for consumer-centric markets, but that also bleed into the business sector, especially in healthcare and field operations.

Greg Parsonson of distributor Tech Data Corp. points to industrial tablets’ traditional vertical industries, including healthcare, manufacturing, education, and utilities, as places where iPad-like models will make inroads as soon as the apps are ready. “The real test, though, will be how successful these devices will be in the SMB as everyday business tools,” says Parsonson, vice president, client systems product marketing, for Clearwater, Fla.-based Tech Data. “While you won’t see tablets replacing desktops and notebooks, we’ll see a strong niche and value proposition develop for these devices. They’ll quickly become everyday business tools and not just something you grab before hitting the road to travel.”

Brian Corey, president of enterprise services at $5 billion telecom distributor Brightstar Corp., based in Miami, shares Parsonson’s bullish assessment on the future of business tablet adoption. “The iPad presents a huge opportunity for resellers,” says Corey. “Today, most applications are more or less self-service.” The iPad is a natural fit for self-serve applications because it is so easy for users to manipulate.

What exactly those business uses will shake out to be is less clear. “It is still early days for the customization of tablets for business uses,” says Corey. “The interest is there. From our customer base, we have had inquiries from pharmaceutical, field services, utilities, transportation, and law enforcement.” What will make the difference? “SMBs will embrace tablets when they are light, mobile, and affordable,” he says.

The low consumer price point—roughly $99—for the Samsung Galaxy Tab hits the sweet spot in Corey’s opinion. “Carriers like AT&T and Verizon have subsidized the device and are buying it down. That makes it very affordable if you sign up for a service contract.”

Focus on the OS

Following Apple’s stellar year, every company that manufactures a computer (and quite a few that don’t) has tablets in mind. Apple is far ahead, of course, but other players are coming on strong. Samsung’s Galaxy Tab, a bit lighter than the iPad and with two cameras, is looking like a shoe-in for second place. Other buzzed-about models include Research In Motion’s BlackBerry PlayBook, Microsoft’s Windows-based tablets, and HP’s forthcoming models

Rather than focusing on what individual hardware vendors are doing, Daoud recommends focusing on “under the hood” features such as OS and type of processor. That’s where the battle will be won. “Channel partners need to understand who is the winner or loser in the OS realm and line up their strategy based on that. It’s less about the device than the OS.”

Parsonson of Tech Data sees a lot of potential in the Microsoft Windows, Android, and Mac tablet operating systems. “There is a tremendous opportunity for VARs to mix and match form factors with the OS and apps that make the most sense for any given application the end user may need,” he says. “Of course, Windows will remain strong in the enterprise, but we expect to see more and more adoption of Android and Mac OSs in the business world.”

Clearly, iPads won’t be the right solution for everything, as much as Apple’s tablet continues to dominate the landscape. There will be room for other players—Samsung, Microsoft, Motorola, and RIM among the big names. That’s not saying tablets will rule the business world next year at this time. Even so, says Corey, “There are some good tablet use cases out there that have good opportunities for the channel to address some open market needs.”