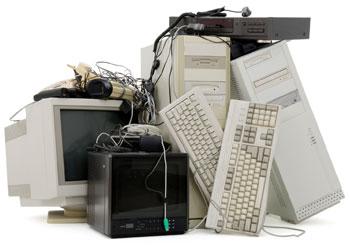 Computer recycling, whether done in-house or offered as a service, enables builders to turn a profit and stay on the right side of the law. By Hank Hogan
Tweet

When dealing with electronic waste, or e-waste, system builders can do well while doing good. As an added bonus, by taking the right steps custom computer makers can avoid legal problems. It's a win-win-win, with the last defined as not paying a fine or facing jail time. Regulatory schemes can apply no matter where a system builder is located, says Jason Linnell, executive director of the Parkersburg, W.V.-based National Center for Electronics Recycling (NCER). There are, for example, 25 different U.S. state laws on the books, with more possible. All but one of the existing laws put responsibility for e-waste on the producer. "The manufacturer of the end device is held responsible for setting up some type of recycling program or paying for the cost of recycling programs," Linnell says.


There are exemptions that vary from state to state with regard to manufacturer size, and system builders may fall below this limit.

There are exemptions that vary from state to state with regard to manufacturer size, and system builders may fall below this limit. However, some states also have mandates requiring that companies meet their e-waste requirements before being authorized to sell products in the state.One widespread producer obligation is that products be branded, and brands registered, so that e-waste can be traced to its source. For state-specific information, system builders should review the laws section of NCER's website at www.electronicsrecycling.org.

The National Center for Electronics Recycling (NCER) is a 501c non-profit organization formed in 2005 that is dedicated to the development and enhancement of a national infrastructure for the recycling of used electronics in the U.S. If you are searching for electronics recycling options in your area, check out the Recycling Basics section on their website.

As for doing well, there are several different ways builders can profit from e-waste. According to the Electronics TakeBack Coalition, which promotes green design and recycling, more than 31 million computers were trashed in 2010. Those units are a resource that can be mined. Most of the value is in the metals that make up the wiring and other components, says Ben Delaney, CEO of ReliaTech, in San Pablo, Calif.

The nonprofit refurbishes computers, doing so, in part, because it teaches people valuable skills. Some of its PC donations, though, can't be reclaimed and must be discarded. The company had been giving these to local recyclers but started its own e-waste recycling program in 2010. Last year it went through about 60 tons of material, which grossed more than $25,000. This year ReliaTech expects to process 400 tons. "You need those kinds of quantities to make any significant amount of money, and then, of course, you also have to search for the buyers who are willing to pay you the best amount," Delaney says.

System disassembly can be labor intensive, but people who are good at it are very fast, Delaney adds. For ReliaTech, this activity fits into its larger mission. Trainees are first taught to disassemble a computer and learn its components before attempting to build one.

Programs like this need space to both store and sort material. For system builders without a warehouse, there's another alternative: They can sell recycling as a service, so they don't have to actually deal with e-waste.

CloudBlue Technologies Inc. of Norcross, Ga., for example, offers e-waste and reverse logistics for IT. Much of the company's business is driven by regulatory concerns. In addition to e-waste requirements at the state level, there are consumer data privacy laws at the national level in the United States and around the world. At either level, simply tossing out a computer is a no-no.

CloudBlue has developed a program specifically for resellers, and custom computer makers could profit from it. For instance, they could bill for disposal of whatever comes out when new gear goes in. CloudBlue CEO Ken Beyer also notes that this service could be billed as an add-on at the time new equipment is sold, which is one way to handle future e-waste.

As Beyer says, "If you're selling a laptop, we can attach a recycle service for that specific serialized laptop. So in three years or five years or whenever someone wants to get rid of it, we come pick it up for no additional cost."

LG Gram for Business 17 (2020): Big Reasons to Like It
END_OF_DOCUMENT_TOKEN_TO_BE_REPLACED