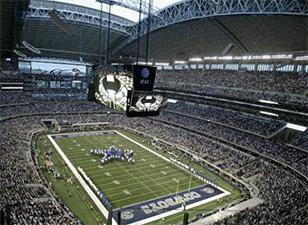 Find out what you need to know and where you need to look to take advantage of the explosive growth in digital signage opportunities. By James E. Gaskin
Tweet

Digital signs and public video exploded into the mainstream when the Dallas Cowboys’ new stadium, cleverly named Cowboys Stadium, opened last summer. While it’s the largest football stadium ever, and filled with excess, the attention was focused on the video screens hanging over the field—over most of the field, in fact.

The two largest screens reach from one 20 yard line to the other. Yes, 60 yards long and 72 feet high, dwarfing the “small” end zone screens that are only 51 by 29 feet. The total video assembly, the largest IP TV installation ever, weighs 600 tons (1.2 million pounds). The screen area is equivalent to 4,920 52-inch flat-panel TVs.

The leading digital signage markets are retail, food service, healthcare, and corporate messaging. Giant retailers like Wal-Mart, early adopters of digital signage, are on their third or fourth generation already. Those huge customers looking for thousands of signs work directly with the manufacturers, have a long sales cycle, and squeeze the price tightly.

Dave Wible, CEO of Industry Weapon, a 20-person firm in Pittsburgh specializing in digital signage software and content management, says, “We’re doing a lot in casinos, K–12 education, and sporting goods retailers,” noting that the education market has a long sales cycle. “Our big opportunities are in hotels, conventions spaces, and even nonprofits and manufacturing.”

Scala Inc., the world leader in digital signage market share and installations, with more than 500,000 screens, started doing cable broadcasting in 1987. “We think of digital signage as a broadcast technology in a closed network,” says Shannon Vander Giessen, vice president of operations for the Americas and Oceana at the company’s Exton, Pa., headquarters. “One area I see growing is restaurant menu boards, as nutritional display requirements will change with new legislation in 2011, pushing a move from light boxes to digital menu boards.”

The flexibility of digital signage helps Gerba of WireSpring reorient IT reseller thinking to succeed in digital signage sales. “Focus on three things: improving sales, reducing costs, and improving customer relations. Put together an argument that has at least two of those three legs that match up with your prospect,” he counsels. “For small restaurants, it may be better to advertise higher-margin products like desserts or drink specials, and provide news, weather, sports, or trivia games in the waiting area that reduce the perceived wait time for customers.”

Kevin Prewett, vice president of vendor management for Santa Ana, Calif.-based distributor Ingram Micro Inc., heads a group of 15 employees dedicated to digital signage. “We see healthcare, with the stimulus funds, as a growth area. Some of our resellers put signs in hospital ER waiting areas now, and display information in English and Spanish.”

This is a fairly new market, but don’t wait too long to get involved. If the area is interesting, Prewett recommends you go to some specific digital signage events, get some vendor training, or even take one of Ingram’s DS Certified Expert program courses. “If you’re thinking about this now, get going. We’ve seen many resellers get on board with training and certifications in the last two years.”

Digital signage vendors say to “think systems, not components” when pitching to customers. While the hardware has become standardized and subject to commodity pricing in many areas, software remains a bit chaotic.

Every digital signage system needs a screen, a media player, and some way to manage the content. Flat-panel TV displays, whether LCD or plasma, or something newer like organic LED, have reached a point where name-brand prices have dropped, and smaller manufacturers offer the same technology for even lower prices. Prices range from a few hundred dollars to millions if you’re outfitting something like Cowboys Stadium.

A hardware media player—a dedicated appliance often made from a customized personal computer—must drive each single screen entity (two or more tied together that act like one). Prices range from a few hundred to thousands of dollars. Lower-end units play content stored on a CD or DVD, or even USB attached storage.

Connections to media players for installation and configuration can be done by attaching a keyboard and a mouse, or through a minimal Web administration server run by the appliance. Many systems require an Internet connection for setup, but low-end systems don’t need a constant connection. Higher-end systems use the network continually for configuration, management, and content upgrades.

The standards in the hardware area include PC components in most of the media players and an HDMI (High-Definition Multimedia Interface) port on the digital screen, included in most screens since 2004. All digital televisions shipped after the fourth quarter of 2009 have at least one HDMI input.

Vendors have long looked to package a digital signage system “in a box,” and many are there or very close. Single-screen systems can now be purchased in the $2,000 range and include all the pieces to create a single digital sign.

Gerba suggests focusing on the system, not the components, and not confusing the customer. “Don’t offer 10 different screens to choose from,” he says. “Offer larger or smaller screens as needed for the installation.” Just as users rarely care which brand of hard drive is in their desktop computers, digital signage buyers look at the software running their systems, not the brand of screen or media player.

“Think add-on sales,” says Gerba. “If you’re installing a point-of-sale system for a restaurant or retailer, ask about digital signage. When doing a monitored alarm for a customer, add signage to the existing deal. Appeal to the service provided, not the actual product.”

For the restaurant, a single digital sign in the lobby area to distract waiting customers can also run training films and health notifications after hours, and is a good entry point for a reseller new to digital signage.

Traditional IT resellers face several learning curves in selling digital signage, not the least of which is the customer contact. “IT is involved, but marketing has the budget,” says Wible of Industry Weapon. “But digital signage is not huge yet, and is rarely even 10 percent of a company’s marketing budget.”

This brings most resellers to an uncomfortable realization: They have no clue how to help their customers create and refresh content to keep the digital signage fresh and useful. All signs and media players come with a way to load files and create a slide show, but another lousy PowerPoint in a client’s lobby won’t impress any visitors, at least not positively.

Industry Weapon created a marketplace, “like the iPhone App Store idea,” says Wible, to provide applications and links to developers for resellers to contact. “Customers do the math and start to realize how much content they’ll have to create to run their signs.” Industry Weapon developed an interface that can ingest third-party applications and handle format translations to the display, allowing customers to ignore the world of APIs and SDKs and focus on their content.

Content creation is an issue for every customer and their reseller. Few IT techs are adept at creating animations filled with interesting visual content. To that end, vendors try to connect resellers to content creators, like Industry Weapon’s marketplace and Ingram Micro’s service network.

Gerba suggests resellers find partners in the Web design business. Those groups are experienced at creating visual content, use Flash animation, and understand the need for refreshing content. Some suggest contacting advertising agencies, but Gerba says the associated costs are far higher.

And speaking of advertising, Gerba warns all resellers he works with to “forget about making big bucks selling advertising on the screens you sell. Resellers don’t have the ad expertise or contacts, and 99 out of 100 times can’t sale the ads.” Avoid deals that require advertising sales, or partner with one of the existing ad sales digital signage aggregators.

While often limited to wall-mounted flat-screen TVs today, the “digital” part of digital signage foretells the next areas of expansion: every screen. Wible’s software and applications from partners are aimed at end points, be they TVs or iPhones.

When people grab their iPhone, they expect the screen to respond to their touch. “Digital signage used to be one-way only, like airport screens listing flight arrivals and departures,” says Vander Giessen. “People are getting used to interacting with flat-screen displays. Using iPhones and iPads makes people want to touch screens. Our partners are asking for more interactivity, and that’s one of the big trends we’re seeing globally.”

Many digital signage resellers come from the AV world, and their experience in video display and production fits well in this market. But IT resellers cover the hardware areas, the ability to manage remote systems, and are used to dealing with content files. A meeting in the middle works for some IT resellers who hire AV and content creation specialists. Others prefer to partner to maintain their focus and give customers the best of both worlds.

No matter which way you read the signs, the digital signage market has hardware standards, lower prices over the past few years, and a strong growth curve forecast. How many other markets have the analysts promising 33 percent or higher growth this year?

How to Help Your Clients Thrive During the Economic Downturn
March 18th, 2020
Do the Math
September 24th, 2020

The Elephant in the Room: Your 2020 Focus on Business Strategy
January 29th, 2020
Cheeky Sales Coach is Taking Off
December 15th, 2020
Video Posted: Help Clients Thrive During This Difficult Period
May 3rd, 2020

ChannelPro 5 Minute Roundup for the Week of January 11th, 2021
END_OF_DOCUMENT_TOKEN_TO_BE_REPLACED

Jabra PanaCast Review - Get Your Huddle On
END_OF_DOCUMENT_TOKEN_TO_BE_REPLACED