Targeting the SMB with RingCentral for Office 365 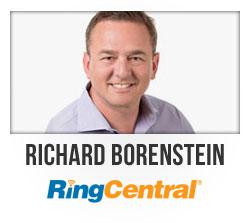 The integration is “Microsoft bringing together best-of-breed partnerships to be able to fulfill core communication needs that their customers really ask for. And it makes 365 enterprise-grade in terms of communications capability,” says Richard Borenstein, senior vice president of business development. “What that does effectively is it extends all of our rich unified communications capabilities within the 365 environment.”

Borenstein says the RingCentral customer base of just under 400,000 businesses has been asking for this type of integration. Also, he adds, “It’s an enormous opportunity, certainly for us, given that there’s 46 million-plus paying users of Office 365 … And as it is with our other integrations and our other large SaaS partners, this is really just a reflection of how people are using their technology. They’d like it to be more easy, more seamless, and they don’t want to be opening up 14 different tabs to accomplish their day-to-day [work].”

He adds, “It’ll be the first of many things that hopefully we’ll end up doing with Microsoft.” In particular, he says RingCentral is positioned to help Microsoft in the SMB space. “That’s our sweet spot, so it made a lot of sense as we spoke to our colleagues at Microsoft to say we could help you focus on an area of the market that you’ve been challenged to address. So you want businesses of all size to adopt 365. We can help enable that by bringing the pieces of the puzzle together that allows SMB companies to succeed and to stay with you for the long term and grow.”

RingCentral for Office 365 was released to “our biggest customers first,” says Marco Casalaina, vice president, Contact Center Solutions and Integrations. “They were the guys who were disproportionately asking for this. So independent of the Microsoft relationship that we’ve now actually forged, we were going to do this no matter what.”

Casalaina says to expect similar types of announcements in the last half of this year.

Adds Casalaina, “And this is all cloud based, so we have no on-premise requirements whatsoever, except a network.”

This gives channel partners more to sell, says Casalaina. “The Office 365 integration is free. Basically, they can go to one of their customers and say ‘Hey, you know what? RingCentral is a cloud-based phone system.’ It just works with 365, and they can basically sell that alongside 365. The partners that I’ve been speaking to about this are pretty enthused about it. Not a lot of people are doing this yet.”