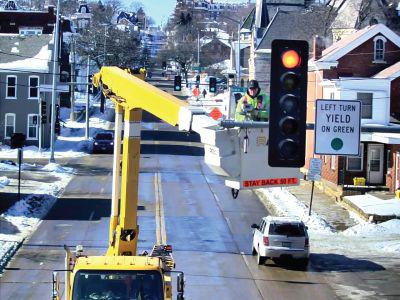 Find out how systems integrator RACOM Corp. helped the city of Dubuque (Iowa) develop a traffic management solution that resides on a fiber optic network. By Rodney Bosch
Tweet

Located along the Mississippi River, Dubuque, Iowa, is a regional hub of 60,000 people who ply the Tri-State border area that includes Illinois and Wisconsin. In the early 2000s, the city launched a project to replace its run-down, decades-old traffic signal infrastructure with a state-of-the-art system built on a fiber-optic network. The objective was to modernize the city’s ability to link traffic signals at intersections in order to efficiently regulate daily vehicle flow and swiftly mitigate sudden traffic calamities.

Initially, surveillance cameras were placed to detect vehicles at the intersections for signal changes, but the city later installed microwave-based detectors to handle that. Lost in the technology switch, however, was the capability to view and record video at the intersections. To reestablish visual support, the traffic department selected a mix of Axis Communications network cameras provided by local systems integrator RACOM Corp.

The IP cameras have become an integral component of the city’s sophisticated Intelligent Transportation System (ITS). Among the system’s benefits, video analysis helps traffic engineers improve roadways without incurring the high costs of new construction. They are able to update signage and roadway markings to improve traffic safety, and police are using footage to get an accurate account of vehicle accidents and other criminal events. Local citizens can use the video to settle traffic accident disputes without going to court.

Let’s delve into how Dubuque’s ITS solution came to fruition. Doing so will provide insight into how integrators can look to traffic systems as a potential means of helping municipal customers utilize surveillance cameras and IP networks to achieve multiple purposes.

The considerable mission of upgrading Dubuque’s archaic traffic infrastructure — signals went untouched for nearly 40 years and scant few were interconnected — fell on the shoulders of traffic engineer David Ness. He spearheaded the project to connect all traffic signals and intersections to a central monitoring location via Ethernet and fiber optics. As the project evolved, the city began installing fixed and pan/tilt/zoom (p/t/z) cameras by Axis alongside other IP-addressable technology as part of its Intelligent Transportation Systems (ITS) initiative.

“ITS improvements are being utilized a lot more often, because you are able to get more efficiency out of your existing infrastructure if you improve your communications,” Ness explains.

In total, about 270 cameras have been installed at 80 intersections around Dubuque. Ness leveraged RACOM’s existing relationship with the city to help make camera purchases, as well as aid in installation and other networking consultation. Aside from assisting the traffic department, RACOM takes care of all aspects of communications for Dubuque and Dubuque County, including land mobile radios for fire, police and sheriff departments. RACOM has played a key role in installing mobile GPS/AVL networks for public works and solid waste departments, a 911 dispatch center, a fixed-base wireless water meter reading system, plus hundreds of network cameras and video servers specifically used for parking lots, parks and river walks throughout the city.

LG Gram for Business 17 (2020): Big Reasons to Like It
END_OF_DOCUMENT_TOKEN_TO_BE_REPLACED