Talking Back to Digital Signage 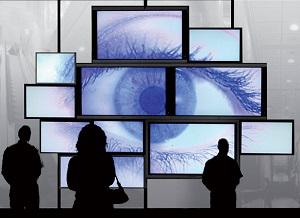 Digital signs have grown up, enabling viewers to summon, contribute to, and even respond to content using their smartphones and social media. By Ellen Muraskin
Tweet
Reader ROI:
Through "Screen-Smart device Interaction," or SSI, smartphones become an input device and a remote control to screen content.

Later, Internet-connected signs allowed content management systems (CMS) to broadcast words, pictures, video clips, and Twitter feeds across networks of screens. Commonly found in restaurant and retail chains, these systems’ content could change programmatically based on time or any number of factors, as well as the human publisher at the CMS dashboard.

Then came smartphones and social media. "Interactivity" has now grown to refer to viewers not only summoning signage content, but contributing to it and even responding to it. Today a stadium audience can send pictures to a giant screen via hashtag. Here's viral marketing literally writ large, since such selfies don't stop at the Jumbotron, but also flow to the feeds of every participant’s social media friends and followers.

Engagement beyond Hashtags
Hashtags are an easy but limited way to establish a dialogue between phone and digital sign. Coming next: true, two-way, phone-to-screen interactivity, through a set of technologies lumped under the term “Screen-Smart device Interaction (SSI).” Those interviewed agree that we are just at the beginning of this curve.

With SSI, the smartphone is directed to the big screen's server through a QR code that it scans, or an SMS that it is sent. Through the server, the smartphone becomes an input device and a remote control to screen content, as well as an output screen to the sign's response.

Through SSI, the phone's browser also becomes host to that digital advertiser's cookie, and hence, contributor to the advertiser’s data stream.

Hopping in the Viewer’s Pocket
"The opt-in nature of mobile engagement has great value to marketers, as does the persistence of the engagement," says Ken Goldberg, CEO of digital signage CMS platform Real Digital Media, in Sarasota, Fla. "Mobile engagement can be precisely measured, which is also of great value. This makes it a great method for continuing an engagement that starts on a big screen and ends on a small screen, often with a transaction."

Other logical applications for phone-to-screen interaction: quizzes, polls, multiparty games, and downloadable coupons. Goldberg: "Imagine being in a doctor’s waiting room and taking some kind of healthcare quiz, then seeing an ad for a new over-the-counter product, and being able to receive a discount coupon and directions to the nearest participating pharmacy."

Sean Matthews, CEO of Atlanta-based Visix Inc., is finding customers among institutions, chiefly midsize businesses, hospitals, schools, and government. He says the biggest use so far for SSI has been in wayfinding applications, which by definition need to remain available after you've left behind the big screen in the lobby. That screen can prompt you for your phone number and your destination; you can receive an SMS with turn-by-turn directions in return.

Another player in this space is NoviSign Digital Signage Inc., based in Israel, which comes with interactive voting/polling, games, coupons, uploading images, and chat out of the (cloud) box. NoviSign will customize for you, and will also white label the service for resellers. Gil Matzliah, CEO, suggests an engagement scenario in which bar customers are asked to vote for their favorite brews; every hour one of the respondents gets a coupon for a freebie.

Currently, 75 percent of NoviSign’s revenues come through its channel of 100 partners, 50 of them U.S.-based. Partners also resell their choice of screen and Android media player, running the NoviSign application. This last can be a very inexpensive device, says Matzliah, "like a Chromebook or an Android stick that costs anywhere from $20 to $100." Programming new games or interactions requires mastery of classic Web programmer tools: JavaScript, HTML, and CCS.

Matthews reports that over 80 percent of Visix's transactions go through AV/IT resellers. They have about 100 highly active North American partners, who bring them more than 50 percent of their opportunities. Partner services are related to physical design, installation, infrastructure, signal routing, media players, break-fix, and replacement. And while they're all trying to do managed services, only a handful provide content services, says Matthews. Roles in this industry are still in flux, but actual interaction strategy and content are largely left to digital marketers.

ChannelPro Weekly Podcast: Episode #200 - Turning It Up to 11

ChannelPro 5 Minute Roundup for the Week of September 20th, 2021
END_OF_DOCUMENT_TOKEN_TO_BE_REPLACED

Jabra PanaCast Review - Get Your Huddle On
END_OF_DOCUMENT_TOKEN_TO_BE_REPLACED