SYNNEX Shares the Magic for Children

The distributor's latest effort is a contribution to build a world-class playground in Greenville. By Colleen Frye
Tweet

SYNNEX Corp. is not only “sharing the magic” it’s spreading the magic with its recent $250,000 contribution toward construction of a world-class playground at Unity Park in the distributor’s home city of Greenville, S.C. SYNNEX is making the donation along with its Concentrix subsidiary and its fundraising initiative called Share the Magic, which was founded in 2011 by Peter Larocque, president of North American technology solutions for SYNNEX. To date, Share the Magic has raised more than $8.5 million for four Upstate South Carolina childrens’ charities: Make-a-Wish South Carolina, Clement’s Kindness, Pendleton Place, and A Child’s Haven.

Unity Park is a public-private project, and the city of Greenville has pledged at least $20 million toward its construction and set a goal to raise another $20 million in private funding from corporations, individuals, and private foundations. PR and marketing firm the Hughes Agency is working with the city, and CEO Velda Hughes reached out to SYNNEX about the playground project, SYNNEX’s Bob Stegner tells me.

“We started thinking, ‘Well, we're doing a lot of stuff for the kids that are in need, but what is something we can do for these kids that are not in need,’” or as I like to think, [kids that] are not in need any longer,” says Stegner, senior vice president of marketing, North America.  He says he envisions the playground as a place where children who have recovered from serious illness can play right along with children who have not faced those health issues.

The SYNNEX Share the Magic Playground (shown in the rendering), which will be built at the center of the 60-acre park, will be designed with the input of childhood development experts and safety consultants. 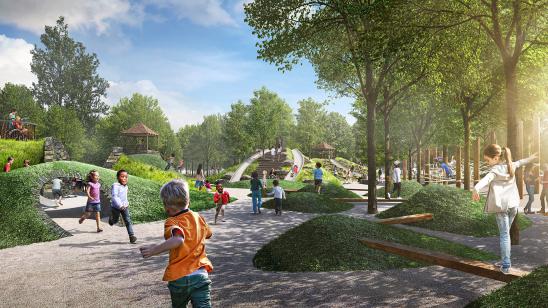 Stegner says contributing to the construction of the playground seemed to be a perfect fit for the Share the Magic initiative, which was originally conceived after a call SYNNEX received from one of its large customers seeking help for the local chapter of Make-a-Wish. Stegner, Larocque, and TJ Trojan, president and CEO of SYNNEX Japan, put their heads together at the time and decided to host a gala that year on the Saturday after the annual Inspire conference, taking advantage of the staging, lighting, and sound system that was already in place for the event.

“Peter set a goal of $500,000 for the first year. I called him crazy,” recalls Stegner. The gala ended up exceeding the fundraising goal.

Since then, the SYNNEX Share the Magic Gala has been an annual event after Inspire, which is being held this year October 3 to 5 in Greenville. The gala includes a dinner, live and silent auctions, and sponsorships. “We'll keep maybe 25 to 30 customers over for it,” Stegner say. “A lot of them want to stay. A lot of our vendors stay over. And I always think that's really neat because that's a long week for them. And our customers have gotten really involved in this as well.”

In addition to share the Magic, SYNNEX’s community involvement committee organizes various events and participation/involvement throughout the year such as auctions, walks/races, and other activities. In Greenville, SYNNEX is the presenting sponsor of the BMW Charity Pro-Am on the Web.com Tour, Clemson University’s Men of Color National Summit, and the Greenville Chamber Annual Golf Tournament. 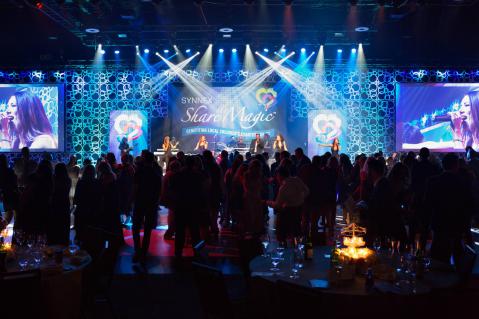 Stegner gets emotional when he talks about the generosity of donors as well as the children he has met who have been beneficiaries of Share the Magic. “We have a wall where the kids can write notes to SYNNEX, and it's right by our cafeteria.... the number of our associates that stop by and read it. There should be boxes of Kleenex sitting there.”

SYNNEX Share the Magic will celebrate its 10th anniversary in 2021, which is when the Share the Magic Playground is slated to open. Look for Stegner, who says, “I'll probably be one of the first people down there on the swings.”

A River of Good Runs Through Techworks Consulting
October 25th, 2019