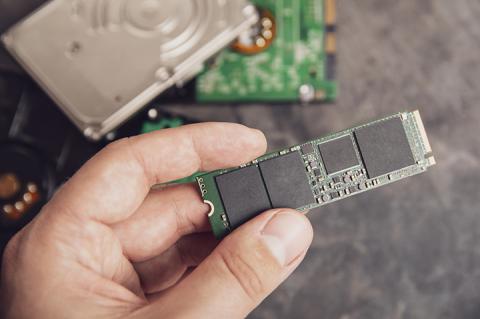 For 35 years, PC users have focused on local magnetic hard drives for storage. Those days are spinning away quickly. By James E. Gaskin
Tweet

WHEN THE IBM XT ARRIVED in March of 1983, the hard disk had a jaw-dropping 10MB of capacity. The IBM AT followed in 1984 and upped the storage ante to 20MB, which high rollers could upgrade to 30MB. Ever since, customers have yearned for more and more local disk space. Today, ads for value desktop PCs tout 2TB or bigger hard drives as standard equipment.

For laptops in particular, SSDs became the drive of choice early on. Smaller and lighter systems don’t have room for spinning disks. Because SSDs are smaller they allow better air flow and they don’t create heat like HDDs. The M.2 size format has become commonplace.

Market research firm Statista shows HDD sales dropping from a high of 175.3 million in Q3 2011 to 95.25 million in Q2 2018. Statista also predicts that total unit sales of SSDs in 2021 will be higher than HDD sales: 360 million versus 330 million. The trend lines for both products are clear: HDD sales are decreasing while SSD sales are increasing.

In 2010, SSDs cost about $3 per GB, inexpensive enough that a small one of around 16GB could be used as a boot disk for $40 to $50. HDDs at the time cost more than 10 times less. Adoption reflected the price disparity. In January 2010, for example, fewer than 20 percent of the systems sold by Puget Systems, of Auburn, Wash., which makes custom desktops and workstations for content creation, engineering, scientific, and gaming customers, had solid-state disks. By January 2018, however, 70 percent of Puget’s systems shipped with SSDs. “SSDs have taken over as our primary storage,” says Jon Bach, founder and president.

CONTENT COMPANIES, such as video and audio creators and editors, often add direct-attached SSDs connected with USB 3 or Thunderbolt to their PCs. Jon Bach of Puget Systems says those drives must be very fast, but also portable. “Our customers dedicate a hard drive to each project or client,” he explains. Workflow becomes tied to the external drive with all the files passed from user to user as needed.

Western Digital, LaCie, Seagate, Samsung, and many others now sell high-capacity SSDs in external enclosures. As SSD prices in general drop, so do the prices of these storage options.

Puget Systems used 128GB SSDs for the majority of systems built until 2013, when 250GB SSDs became affordable. Today, says Bach, the most common SSD size is 500GB, followed by 1TB, and he’s a year or two away from not even carrying a 250GB SSD.

HDDs still make up about 30 percent of Puget Systems’ volume today, but Bach says that in 95 percent of systems, “the HDD is a secondary volume to the SSD. Half our computers go out with both SSDs and HDDs. The other half go out with SSDs alone.”

Bach finds that people who have a reason for HDDs on local systems, such as regulatory compliance issues or the need to keep audio or video files close to avoid network latency, are willing to pay for larger and larger drives. “Over half our HDD sales are 4TB or larger,” he says. During 2017, 10TB drives shipped in more than 20 percent of his systems.

Experts say that while their use in PCs will continue to decrease, HDDs will remain a viable storage choice. “Hard drives on PCs will go away in the next three to five years,” predicts Rob Enderle, analyst and founder of the Enderle Group, in Bend, Ore. “PCs will start to look more and more like tablets and the always-on connected devices. But hard drives themselves will never disappear. They’re just too cheap, incredibly cheap, to go away as a [network] storage option.”

ChannelPro 5 Minute Roundup for the Week of October 18th, 2021
END_OF_DOCUMENT_TOKEN_TO_BE_REPLACED

LG Gram for Business 17 (2020): Big Reasons to Like It
END_OF_DOCUMENT_TOKEN_TO_BE_REPLACED