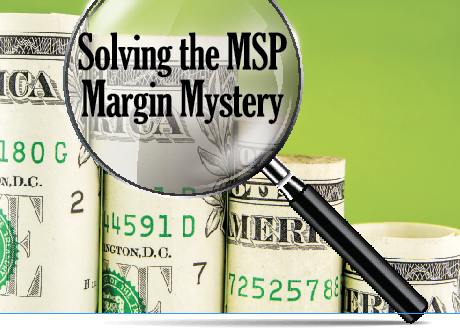 According to a recent study, most MSPs saw margins decline slightly in recent years. So what does the minority of providers whose profits are rising do differently from everyone else? By Rich Freeman
Tweet
Reader ROI:
MARGINS FOR MSPS in aggregate dropped 4 percent between 2012 and 2016, according to data from Service Leadership Inc.
MSPS WHO OUTSOURCED NOC DUTIES to a master MSP saw margins hold steady during that period, according to the same pool of statist
MARGIN LEADERS, experts say, tend to be disciplined about lead generation, operational efficiency, and avoiding price wars.
THEY ALSO FOCUS on high-margin services that require vertical expertise, in-depth experience, and strategic insight.

HOW ARE YOUR MARGINS looking these days, MSPs?

If they’re up, you may be among a fortunate few according to research from Service Leadership Inc., a managed services consulting and benchmarking firm based in Plano, Texas, that pools and indexes real-world operational and financial statistics from thousands of solution providers. On average, the company’s data shows, MSPs saw margins on service offerings dip 4 percent between 2012 and 2016.

That figure’s no outlier either. Anecdotally, a range of experts with their finger on the pulse of the managed services masses have seen a similar pattern.

“The MSP community is feeling margin pressure,” says Dave Sobel, senior director of community at SolarWinds MSP, a Durham, N.C.-based managed services software maker. Why is hard to say, he continues, but it probably has something to do with the growing maturity of the managed services market. As MSPs increasingly build the same offerings into their service plans, price gradually becomes the only thing that distinguishes them from one another.

That makes him and other MSPs with rising profits useful test cases. What separates them from the margin-hungry herd?

Abbott has a pretty good idea what the answer is as far as his own company is concerned at least. His margins began rising close to five years ago, when he started using a hosted RMM solution and outsourced NOC from Boston-based IT management platform vendor Continuum that lowered the administrative burden on his technical team.

“We don’t have to manage the tool,” Abbott says. “There’s clearly an efficiency there.”

Indeed, Service Leadership’s data suggests that offloading administrative duties onto “master MSPs” like Continuum is one of the factors separating top-rank providers from their peers. Margins held steady for the Continuum users in Service Leadership’s benchmarking index during the same five-year stretch in which they declined for MSPs at large.

Those figures don’t surprise Continuum CEO Michael George, who built the company’s entire competitive strategy around the fact that good IT help is increasingly hard to find these days.

“We looked at the skills gap in our economy and we looked at the rate of adoption and the demand for IT services in small businesses and said, ‘There’s a huge disconnect here,’” George explains.

Companies that hand management chores over to Continuum don’t have to fight it out with competitors in a tight technical labor market, confirms Service Leadership CEO Paul Dippell. That frees up money they can invest in revenue-boosting sales and marketing efforts.

“It doesn’t yield the results they want, so then they’ll stop for a period of time, and then they’ll come back and they’ll find another inspiring plan and dump in 10, 20, 30,000  dollars on it,” Peterson says. “To a lot of these guys, that’s enough to move that [margin] needle down 4 percent.”