Slack Season: Time to Jump In? 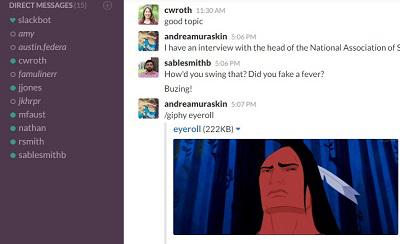 Slack, a collaboration and messaging app for teams, is taking the millennial world by storm. Should you be looking at it for your workgroup and your clients? By Ellen Muraskin
Tweet

Question: What looks, grows, and stores like a chat; holds searchable files inside associated conversations; and runs synced on all desktops and mobile devices? Answer: Slack, and a raft of competitors. According to creator Slack Technologies Inc., based in San Francisco, Slack has up to 2.3 million daily active users (up from 520,000 a year ago), 675,000 paid seats, and 280 app integrations as of February 2016. It last reported $64 million in annual recurring revenue.

Slack has variously been described as a collaboration app, a messaging app for business, a workflow app, and another (internal) email killer. Befitting today’s workforce, it’s a tool for the text-centric, interruption-tolerant, post-voice generation and its more adaptive elders. Unified communications analyst Jon Arnold calls it what UC would look like today if that category were being invented from scratch.

Slack is especially useful for small teams, those occupying different physical but common mental space. Such workers only need quick answers and perhaps a file attachment to pipe through a chat window, without the hassle of firing up an email app or breaking their trains of thought.

Tuning into Slack Channels
Don’t confuse Slack with Skype or Google Hangouts. For starters, Slack lets you slot chats into instantly created channels. A channel can be a customer, project, or product—or anything that makes the most sense to a business. Need to find the contract signed by Customer A? It’s in their channel. Need to find the SLA specifics there? Search within Slack.

Another Slack differentiator is its booming integration growth and its ability to automate responses to events. If you can build a Slack bot, you can automate routine answers to routine questions, for example.

Dewayne Peden, professional services team leader of MSP Nashville Computer Inc., in nearby Brentwood, Tenn., uses Slack all the time to retrieve terms or IP addresses. He also finds it easy to drop network diagrams, annotated screen shots, or JPEGs of server racks or product numbers into Slack chats, to assist technicians on customer sites. It took him less than 15 minutes to set up, he says.

Peden says he’s reaped a lot of good will by recommending Slack to clients. Direct revenue potential starts with integration and customization, where Slack gets used as the interface to a host of back-end application tasks and shared resources, saving additional logins and navigation steps. While users at less technical firms will learn to quickly summon those apps with /commands, they’ll probably leave the workflow integrations and bots to pros.

Slack as Master Interface
Grace Schroeder, CEO of Denver-based start-up Idea2 Ltd., describes a scenario in which a custom #ATN command in Slack allows technicians to add text notes to a ticket created in a help desk app. A “low-code application platform as a service,” Idea2 listens in Slack for those hashtag calls and gets the back-end, integrated app to perform its task without showing its “ugly” interface.

Idea2 features prebuilt endpoints and a framework for developers to build their own integrations. But going further, Idea2 (and with more effort, Slack itself) can be used to recreate that “ugly” app altogether—or better, only the functions the customer actually uses. Here, Schroeder sees Idea2’s opportunity and its threat to older, often bloated apps. “Anyone with a large embedded base of clients is trying to figure out whether Slack is going to be friend or foe.” Idea2 aims to launch its back-end developer tool, Builder, by summer 2016.

Schroeder, who previously ran channel marketing for Qwest, sees “a lot of room for smart, app-savvy partners to build consultancies around helping small and midmarket companies implement Slack. A lot of these guys know so much about the way their customers operate that they would be in a great position to sit down, learn Slack themselves, [and] apply what it does to their customers.” Schroeder’s case in point: New York-based ChatOverload, which just got funding to be a Slack consulting firm.

ConnectWise Warns MSPs: Get Serious About Security Soon or Else
END_OF_DOCUMENT_TOKEN_TO_BE_REPLACED

Jabra PanaCast Review - Get Your Huddle On
END_OF_DOCUMENT_TOKEN_TO_BE_REPLACED