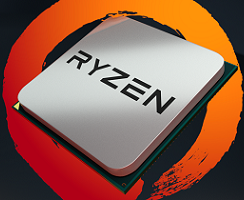 AMD’s role as plucky upstart against Intel works better some years than in others. In the past, AMD owned a fair percentage of PC processor sales. Lately, its market share slumped to single digits. But experts agree that the new Ryzen chip family, based on AMD’s rebooted architecture called Zen, can get the moniker “also ran” back up to “major Intel competitor” once again.

“What’s most notable about Ryzen is its brand-new architecture,” says Patrick Moorhead, president and principal analyst at Moor Insights & Strategy. “It’s been a decade since AMD has had a solid CPU architecture and now with Zen [it does]. It’s highly likely AMD will take unit market share from Intel, and the only question is how much.”

AMD released benchmarks that show Ryzen’s considerable performance advantage over Intel’s i7 chips, but “only on very highly threaded applications where AMD Ryzen is bringing more cores and threads,” adds Moorhead. “It doesn’t do this on games or on single-threaded apps.”

What Ryzen does do for system builders focused on single-threaded apps is cut their CPU cost by half. While Intel’s top i7 sells for more than $1,000, AMD put its top chip price at $499. “This makes pricing much more competitive,” says Jim McGregor, founder and principal analyst at Tirias Research. “It used to be that $2,000 was the entry point for the high end. Now that could be an excellent system.”

McGregor suggests system builders focus on providing the right system for the project, then look at the price point. “Your AMD system will be at least $500 less just because of the processor cost. Some will stick with the Intel brand, [and] some will try the lower price for the same performance.”

System Sales Thus Far
Mike Beuligmann, president of eCollegePC.com LLC, based near St. Louis, was excited to see the new chips. He says system sales with these chips have been slow so far, but they are early in the rollout. “The AMD 1800X chip is supposed to compete with the Intel 6900K chip, but our testing shows an overclocked 6850K [Intel’s previous i7 model] is about the same performance as the 1800X and basically the same price,” says Beuligmann. He believes there will be an uptick in sales when the lower-priced Ryzen chips come out in a few months. “General CPU performance is much better with the Ryzen chips, but until software is written to use all the cores of these chips we won’t see big gains in overall performance.”

McGregor’s research shows PC makers adopting Ryzen quickly. “Every major PC brand is launching on AMD, and there are 19 high-end gaming launches as well.” He’s been working with and watching AMD for about 25 years, and remembers when the company had nearly 30 percent of the processor market. “Obviously, the PC vendors see something,” he adds. “AMD screwed up with Dell, [which] dropped the chip, but now Dell is back.”

No one expects Intel to cede market share without a fight. Pricing adjustments, short or long term, are a common tactic to maintain volume sales. McGregor notes, “Intel has a new [chip] version coming that’s new from top to bottom.”

PC refresh rates have slowed over the past few years, but that may help AMD, says McGregor. “Consumers may not need the extra performance now, but they want their systems to last five years or longer. Ryzen could be appealing for IT managers trying to future-proof their systems. There’s lots of upsell in industrial and enterprise markets, which should help AMD.”

Beuligmann adds: “The number of AMD systems we have sold over the past few years has dropped dramatically. My guess is that anything new AMD comes up with that is close in performance should help [the company] expand.”

Wrapping Ryzen with graphics and memory as an ecosystem should also help system builders. “AMD’s new Ryzen family of chips isn’t negative to Intel,” says McGregor. “It just raises the excitement level in the industry.”

ICYMI: Our Channel News Roundup for the Week of June 29th
The Elements of Culture
END_OF_DOCUMENT_TOKEN_TO_BE_REPLACED