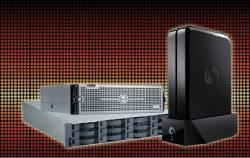 It's time to upgrade your DAS IQ: It does more than you think, and for a lot less than you'd pony up for NAS or SAN. By James E. Gaskin
Tweet

If you think direct-attached storage only means the boot drive in a server, you need to upgrade your DAS IQ. Today, DAS can mean external storage that supports multiple servers for high-availability cluster computing. And DAS can do this for less money than the more common network-attached storage (NAS) and storage area network (SAN) solutions that first come to mind.

DAS was once the only option for server storage, of course. Early servers with 5.25-inch hard drives that weighed 10 pounds booted the server, and held the network operating system and all the client and application data. Data in one server was unavailable to any other server, or to clients not connected directly to the server. Now we curse those “information silos” that trap data in one place for one group.

Companies with growing data storage needs had limited expansion opportunities with early DAS. Many second servers in a company were needed strictly for the disk space. The push to shared storage, with NAS and SAN systems, directly addressed the shortcomings of DAS, freeing information from one server to share across the network. Adding storage space no longer meant adding a server.

Now that network storage is all the rage, why should anyone look at DAS as more than a server boot disk? “The theory of SAN is much more successful than the reality,” says Andrew Reichman, senior analyst at Forrester Research Inc. “For the last 10 years or so, the prevailing best practice is toward consolidated storage on the network. People have been moving that way with the argument you can share the workload, provide more protection, have a lower cost per user, and so on. But most companies haven’t done as much consolidation as they should. They have a complex environment, and workload sharing is often poor because people worry about sharing their disks with other groups.”

While “prevailing best practices” is a good guide for companies, it can get expensive. Vendors suggest one SAN box for application storage, and one NAS box for files. NAS appliances for workgroups offer 4TB of storage for around $1,000, but entry-level SAN systems tend to be in the 10TB range, overkill for many SMBs.

RECENT TRENDS
Three trends have invigorated DAS storage over the past several years into an area resellers can no longer ignore. First of all, servers can pack in many more of the new, smaller hard disks than ever before. The major server vendors all offer up to 16 2.5-inch hard drives in at least one of their server models. While SATA drives don’t yet have the performance of SCSI, they make it affordable to load a server with RAID 5 arrays, offering double-digit terabyte storage.

Second, technology from NAS and SAN systems is being used to build external DAS units with multiple ports to support multiple servers. Finally, applications are starting to take over storage management, providing replication and high availability, among other features, that used to require expensive SAN hardware and software management applications.

“Let’s say I take an HP ProLiant server and load it up with 16 2TB SATA hard drives right in the server. Is that a server or a storage system?” asks Greg Schulz, founder and senior analyst at the Server and StorageIO Group. “Call it what you want, but it’s still DAS. Vendors are using DAS to morph into NAS. Put Windows Storage Server on the box, and you have a NAS. That’s what Dell and HP do.”

According to Schulz, “DAS is one of the most popular and timely topics, especially for VARs looking to go sell products. But DAS can be confusing, because it can mean internal dedicated, external dedicated, or external shared storage. DAS no longer means dumb-ass storage.”