See Me, Feel Me, Touch Me: Digital Signage Fights to Be Noticed 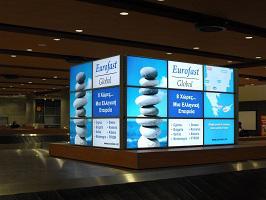 Channel pros are waging a battle for the attention of today’s distracted consumer with the help of next-generation signage technologies. Will they win it? By Rich Freeman
Tweet
Reader ROI:
OLED, 4k, and curved displays are among the next-gen technologies that providers are using to get their solutions noticed.
Proximity-based signage systems are creating new ways for brands to interact with consumers.
Directional audio and 3-D signage are two additional ways to extend a solution’s “dwell time.”

Late in 2014, researchers in Microsoft’s Canadian subsidiary surveyed 2,000 people to see if the internet, mobile devices, and social media services really were shortening attention spans as widely suspected. The results? On average, study participants could concentrate on one thing for just eight seconds. That’s down from 12 seconds as recently as the year 2000, and also one second less than the attention span of a typical goldfish.

There’s no question about it. In a world teeming with distractions, grabbing and holding a consumer’s attention is harder than ever—even for providers of flashy, colorful digital signage solutions. The endless parade of visual stimuli competing for your notice these days has eroded the eye-catching power of traditional signage deployments based on plain old rectangular, flat-panel displays.

“We are so inundated with information from our smartphones to our tablets, laptops, and most recently digital signage, that new shapes, sizes, and locations will be needed to emphasize a message and make it memorable,” says digital signage analyst Alan Brawn, of Brawn Consulting LLC, in Vista, Calif.

Signage vendors know it, too, and are responding with a wave of innovative new technologies designed to be all but un-ignorable. Though some are years away from mainstream status, leading-edge channel pros are exploring their potential already.

Jaw-Dropping and Budget-Busting
Much of today’s innovation, not surprisingly, centers around the part of a digital signage solution more responsible than anything (short of the content) for attracting and retaining a viewer’s gaze: the display.

OLED displays, for example, are one of several new technologies slowly making their way into the signage solution designer’s arsenal. Brighter and sharper than LCD panels, OLED models also come in larger sizes that enable signage specialists to create wall-filling solutions without assembling a mosaic of separate, smaller devices.

“Ultra-high-definition” (Ultra HD) 4K displays are gradually appearing in signage solutions now as well. Until recently, affordable high-resolution panels topped out at 65 inches, notes Hussain Ali, principal of Houston Dynamic Displays, a signage solution consultancy in Houston. Thanks to 4K technology, however, equally sharp products up to 98 inches have begun arriving in mounting numbers. Pricing for such products, moreover, is rapidly dropping into the range of merely high-def panels, and Ali believes their dazzling brightness and clarity can more than justify the extra cost in settings where image quality matters, such as museums.“[If] you’ve got the right content, it’s jaw-dropping,” he says.

Finding such content is neither cheap nor simple at present, though, and Pinke for one questions whether a typical SMB really needs the extra resolution a 4K display provides. “The distance people are viewing these at is just greater than you need 4K for,” he says. “The ROI just doesn’t quite cut it yet to do 4K versus HD.”

Pinke is one of many in the signage channel with similar doubts about the curved displays manufacturers have recently begun shipping. LG and Samsung are two of several vendors that showcased such products at this year’s Digital Signage Expo in February, but while they do make an impression, Pinke concedes, they’re also significantly pricier than flat panels and typically not as sharp.“The resolution on them is still a little loose,” he says.