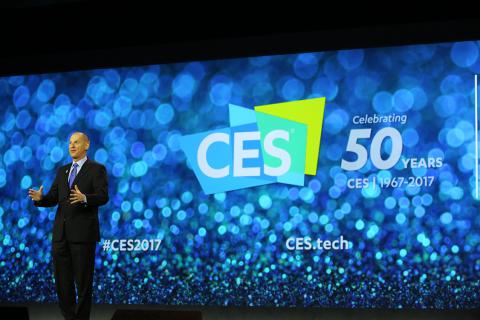 We take a look at some of the hottest technologies from the world’s largest gadget expo.

EVERY JANUARY, right after the Times Square Ball in New York drops, the entire technology industry descends upon Las Vegas for CES, the annual trade show from the Consumer Technology Association (CTA). This year marked 50 years of this event that, since its inception in 1967, has evolved into one of the largest expositions in the world. Earlier in its history the event focused on TVs, radios, and other consumer electronics; now, however, CES showcases the latest technologies and services from more than 3,800 companies—everything from TVs to self-driving cars.

“What an incredible way to celebrate the 50th anniversary of CES, with the largest show floor in our history showcasing the next generation of innovation that will revolutionize our world,” said Gary Shapiro, president and CEO of CTA. “The products and services unveiled at CES 2017 will touch nearly every single global industry.”

CES is an event like no other, now so large that it overtakes the Las Vegas Convention Center, the Sands Expo hall, and numerous other hotel convention areas and suites along the strip. Altogether, 2017’s exhibit space spanned more than 2.6 million net square feet, or nearly 60 acres. To give additional perspective, it’s a little more than 45 football fields. If you ever go, bring comfortable shoes and a Fitbit.

Historically, CES hasn’t always been of interest much interest to the IT channel, given the event’s end-user hardware focus. That has changed, however. For the past decade, CES has been one of the best places to get insight into the direction of the technology industry as a whole. It also now showcases new hardware tech that integrators will be working with soon, such as drones, connected vehicles, virtual and augmented reality, and IoT.

It would take a book to go through all the amazing products, prototypes, and technologies shown at the event, but here are a few of the important trends and notable products to come out of CES 2017.

Qualcomm may be the next 800-pound gorilla of silicon

One of the overarching themes of this year’s CES is that pervasive connectivity is the future for all hardware, and it doesn’t matter if the hardware is a car, phone, computer, drone, or toaster (seriously). Qualcomm is the beneficiary of all things cellular due to its numerous patents in wireless communications, and the more devices utilizing cellular connectivity means more happy-dancing over at Qualcomm HQ.

However, it’s chops as a chipmaker get more impressive each year, and the new Snapdragon 835 shows that they mean business.

Compared to the Snapdragon 820, the 835 is 30% smaller and 40% more power-efficient thanks to its new 10nm manufacturing process, yet runs 27% faster. It’s Adreno 540 graphics core is 25% faster, and includes a host of upgrades to improve things like mobile VR and photography. It can grab 5 hours of battery life in 5 minutes on the charger, connect to wireless and cellular networks with faster speeds, manage multiple photo sensors, and possibly cure cancer.

Ultimately, this means Qualcomm will be powering nearly every high-end phone and lots of other mobile devices like tablets in 2017, not to mention the 4G and 5G networks they connect to. And with Microsoft’s recent announcement that the full Windows experience (including the ability to run Win32 apps) will be possible on the Snapdragon 835 with the release of Redstone 3 late this year, Qualcomm may very well end up powering a lot of mobile Windows PCs in the future, too.