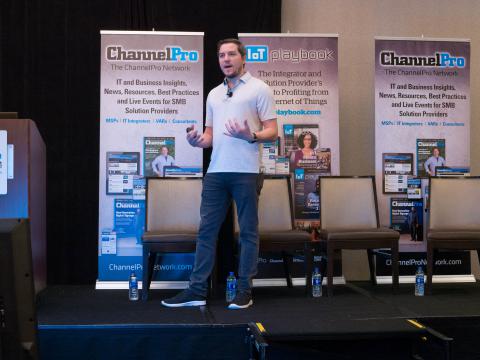 Zane Conkle (pictured), CEO of VoIP vendor Cytracom, says MSPs must standardize their stack and get their messaging right if they want to make money in the voice market. By Rich Freeman
Tweet

ACCORDING TO OUR 2019 State of the Channel survey, fully half of channel pros offer VoIP or unified communications to their customers at present, and another 15 percent plan to in the future. Zane Conkle, CEO of VoIP provider Cytracom, believes most of those providers are either delivering voice services inefficiently or selling them ineffectively.

In this lightly edited Q&A, Conkle discusses the latest adoption trends for VoIP among MSPs, the benefits of offering a standardized VoIP solution stack, and how VoIP platforms with automated failover capabilities like the “voice continuity” functionality Cytracom rolled out in February 2018 make an IP-based voice offering’s value proposition easier for customers to understand.

ChannelPro: VoIP and unified communications sometimes get used interchangeably. From your perspective, are they essentially the same thing or are they different opportunities?

Zane Conkle: Historically, the difference has been that if I say “VoIP” it’s a phone on my desk … It’s really the voice side of the house, period. Ends there. When you talk about unified communications, now you’re talking about voice on my desk, voice on my smartphone, aka the mobile app, voice on my desktop. If I’m at a conference, I open up my laptop and I can see everybody’s status in the office. I can make and receive calls. I can have a video conference with screen share. It’s truly unified, and you can extend that quite a ways. You’ve got messaging built in, all those things. And I think what you’ll see is more and more people are starting to expect some of those features, especially as you start moving upstream to bigger accounts.

ChannelPro: How penetrated is VoIP in the managed services channel right now?

Conkle: We’ve come a long way from MSPs that don’t have anything to do with VoIP. When I first got into this market, MSPs wanted nothing to do with it. You said, “voice” and they ran. You just don’t see that anymore. They understand that this is truly something that’s part of a stack they’ve got to manage.

I think what you see, though, is it’s a very low percentage that have truly standardized on it. Some of our best producing partners are more mature MSPs, and what they’ve done is they’ve established a standard stack, a standard offering, and there’s no variance. A lot of MSPs are not at that place. They’re still trying to figure things out. One month, they’ll offer vendor X and the next month, they’ll offer vendors X, Y, and Z. I think as MSPs mature, they start figuring out that’s really an unsustainable model to scale and you really, truly have to standardize on a specific vendor.

Conkle: I think it’s twofold. I think you have two camps. If you talk to most MSPs, they’ll tell you, “We need to do VoIP, because we understand that if we don’t do it, then the competition does.” I mean, you’re seeing this increasingly. I can’t tell you how many deals we’re seeing where the ISP is coming down in the managed services space. Used to be we’d see that every so often, but I’m telling you, that is nearly a weekly occurrence now. And so the MSPs are starting to see that and they’re starting to feel that, so they understand that we have to offer VoIP as a hedge, but there’s no intentional effort put on that.

So I think you have that side, and then the other is people [who] don’t know how to position it. … That’s what we want to help with, and what we’re really focused on is voice continuity. … The real reason that voice continuity came to be was we wanted to enable our partners to have a different conversation with their customers, and when they’re talking to their customers about BDR, this fits right in with that. They’re not going to reinvent the wheel.

Top 5 VoIP Trends to Look Out for in the Years Ahead
December 9th, 2019

ICYMI: Our Channel News Roundup for the Week of March 30th
END_OF_DOCUMENT_TOKEN_TO_BE_REPLACED