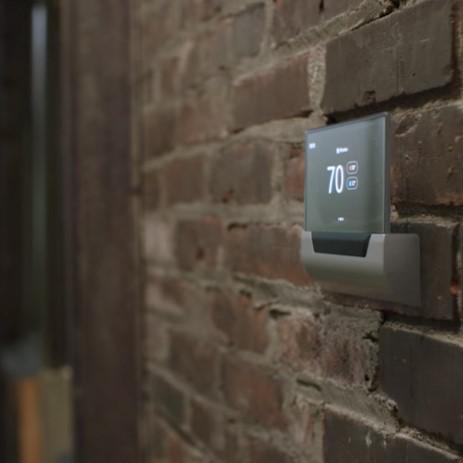 The GLAS smart thermostat is powered by Microsoft’s Cortana and is being marketed toward businesses and commercial properties as well as residential spaces. By Chelsea Cafiero
Tweet

Last year Microsoft said it wanted to open its Alexa-style voice assistant Cortana up to third parties, and one of its first iterations is here; Microsoft and Johnson Controls have partnered to create a Cortana-powered smart thermostat called GLAS.

Similar to Nest and Ecobee, GLAS will monitor the temperature in a room, raising or lowering it to save energy. It will also include a touchscreen to allow manual controls and informational checks, including temperature, indoor and outdoor air quality and calendar schedule.

A promotional video (view above) also says GLAS will detect whether or not anyone is in a room and operate accordingly.

“GLAS is a thermostat that moves with us. Its daily reporting provides insights needed to create the perfect atmosphere for your business, your home, the places you want to visit … GLAS knows when you’re in the room and when you’re not. GLAS constantly monitors indoor and outdoor air quality and intelligently changes its settings, making it capable of providing leading energy savings.”

GLAS will run on Microsoft’s Windows 10 IoT Core operating system and have Cortana voice services built in, taking aim at both Nest and Ecobee, which can be controlled via Amazon Alexa.

In the promotion video, Microsoft appears to be marketing the thermostat to businesses and commercial properties as well as residential spaces. The company plans to power GLAS with its Azure cloud services, which would put it right at home in a workplace environment.

That could make GLAS stand out, considering most smart thermostats are geared towards homes and not offices.

If third-party integration is the key to Alexa’s and Google Home’s success, this is a good first step for Microsoft’s Cortana. But the Internet giant doesn’t plan to stop here, saying it will bring Cortana to refrigerators and toasters, too. That’s a new one.

This article was originally published by our content partner CE Pro.

Tuning for the Future with IoT
February 20th, 2020

ICYMI: Our Channel News Roundup for the Week of August 3rd
Selling Cybersecurity Virtually In The New Normal
END_OF_DOCUMENT_TOKEN_TO_BE_REPLACED