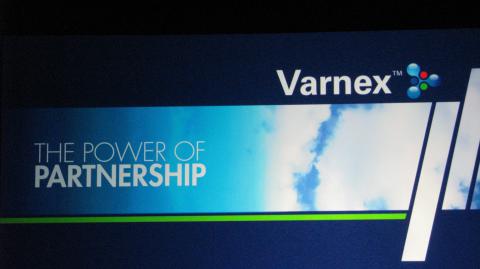 We're live in Dallas, Texas, at the Synnex Varnex event this morning for the general session. Hit refresh to see the latest posts and ChannelPro commentary from the session. Times reflected are Central Daylight Time.

2:00 - Bob back up wrapping up today's general session. Thanks to all for following our live coverage of the multi-part general session here at Varnex! Give us a shout out on Twitter @channelprosmb with your thoughts and suggestions on how we can make our live coverage even better! Also, like us Facebook at http://www.facebook.com/ChannelProNetwork.

1:56 - Who is willing to pay more for security? Low hanging fruit: banks, schools, healthcare, law firms, financial firms, etc. Information security pros are in high demand - must consoldiate resources. "Security can be hard and confusing, but it doesn't need to be." That line was a bit of a plug for himself as he concluded.

1:53 - Security is an afterthought. Take IoT, Bill says he can't imagine the pitch for IoT devices. "Let's make a bunch of consumer grade hardware that controls everything, runs free software like Linux, will never be updated, and is attached to the internet. What could go wrong?" According to Bill, the only organization that writes secure code is NASA.

1:51- Even those who are in the cloud and think they are secure need to run tests against the cloud, too. Believing just being in the cloud makes you secure is a fallacy. He says no single sku solves security.

1:43 - Looks like the panel session is wrapping up. We've recorded the audio, and if there were any other good nuggets in there we couldn't get to as they were talking, we'll try to get it posted here later or in another article. Bob back up. Bill Black coming back up, now known as the "good Bill Black." Good Bill wears a suit, apparently. He scared the pants off everyone earlier as Bad Bill (in the hoodie). "Does any one like the security guy? No! Because he alwasy says "no!"

1:36 - One of the panelists was asked whether or not he's looking into BI (business intelligence) and big data. The response is that the question hit the nail on the head. His firm is investing heavily in BI and big data analytics, which is becoming increasingly important. Another panelist chimed in to echo Kevin Murai's reminder not to forget "the second platform" since that is the foundation of the things above it, like BI and big data. It takes all three parts, including infrastructure, to create a full IoT solution.

1:32 - Internet wen't out there for a bit (happens at events like this). A few interesting notes, the panelist that works with health care partners noted that many health care providers he works with who committed to iPhones for mobility are starting to back out and change course due to the inability to lock them down.

1:25 - Panelist from Hollywood who sells a lot to media companies, "The current political climate actually helps us a lot. Lots of ads being bought, which helps us a lot." Another panelist indicates his business isn't quite as good, but they are working on developing more cross selling opportunities that should pay off in 2016.

1:22 - Objective of the panel is to socialize (?). I guess he means socialize and networking as a benefit to being part of Varnex, not specifically this panel session. "How is business this year? Any challenges." Answer: "First quarter has bee strong, but there is concern. Indicators is that health care is going to be strong." Answer from another panelist, "Education has been really good; lots of growth and a good year so far."

1:11 - Bob back on stage introducing Mike Brogan. They'll be bringing up some panel members.

1:05 - They're handing out a bunch of hats like the one he's wearing below. We're in Dallas, so hats are kind of a big deal. Lots of regional Varnex events coming (really it's a big list), so if you want additional education or want to get involved with Varnex, there's an event near you.

1:03 - Tomorrow they'll be announcing a new ambassador program that they'll be rolling out. We'll try to get additional details on that when they put the release out.

12:59 - Talking about branding, but more than branding. "New RFP and verbage to help you look bigger than your are. With us, you're part of a billion dollar entity." They're also working on improving Education, working better with vendors, how to position MDF, and more. "What we train on will be impactful and relevent to the end user community."

12:47 - And we're off! Bob Stegner bringing out the Maverick's Maniacs! Sounds like we'll be kicking things off here with a show.

12:42 - Welcome back everyone! Part 2 of our ChannelPro Live Blog coverage will resume shortly. The room is filling in now, so I suspect we'll get started again in about 5-10 minutes.

9:25 - That's a wrap for the time being. They are splitting up the general session a bit, so we'll be back in for more live coverage starting at 12:40PM Central. We'll see you then!

9:20 - NSA's Cheif Hacker "loves smart phone apps." He's talking about the Facebook app, which Bill says allows Facebook complete control of your phone. "Facebook probably won't do aything, but if I could get you to download my app I could do almost anything to your phone with your data. And if you SSL into a corporate network - even better."

9:17 - Bill is an intersting guy, and is really making people think about where and how they can be exploited. "Today we produce more insecure code than we could possibly patch in weeks, months, or even years." He just brought up an interesting case about how everyone ignores printers, but since most printers have network access and run Linux, they can be exploited and used as an attack vector that generally goes undetected for ages.

9:12 - Talking patching now. "How long does it take to reverse engineer a Microsoft Patch." Bill says he can reverse a patch and have an active exploit within 4 hours. "Do you patch your customers within 4 hours?" I'd say that's pretty freaky, especially given most probably don't get their systems patched within 4 weeks, let alone 4 hours.

9:07 - Bill asked if anyone here thinks their data is secure - not a single person raised their hand. Talking password security - how long does your password need to be? He says through the use of Rainbow tables, giant tables of password hashes, that go out over 37 characters long.

9:05 - Dell announcement. Technology Competency credit for Varnex Members. $250 for client, or $500 for server. Bad Bill Black up next - the Doom and Gloom of Cybersecurity.

8:59 - Cheryl is noting that Dell has been a big player in the Channel community for over 8 years. "Double digit growth in Distribution." New for 2016 in their programs: new competencies for products, services, and solutions, future-ready IT blueprints, scale-ready payment solutions,  new-business incentives, and multi-LOB accellerators.

8:54 - Cheryl Cook on stage pitching Dell. Not much to share beyond the standard pitch, but an interesting note that Dell is investing a lot it its own technology partners to do more in converged infrastructure, cloud, and connected devices. Of those devices, she's noted Dell had a stellar year in hardware. We would agree, with devices like the Dell 13 and 15 laptops, they are currently a trendsetter.

8:50: Sorry for the break in coverage, folks. Eager editors at home trying to fix typos while I'm trying to add live posts. Anyway, a short video for Dell played, which was pretty much a commercial. Here's a shot I took of the crowd. A captive audience I suppose, but everyone is face-forward paying attention.

8:43: Murai says Synnex can be more than a reliable source of supply, but also a "trusted partner." It's not like we haven't heard that term before - isn't everyone a "trusted partner" these days? Bob back up on stage, just called Murai a "geek." (He meant it in a good way)

8:41 Now talking about the blueprint for IoT solution. He says the technology isn't new, but the pervasiveness of Broadband is enabling rich solutions to sense, analyze, and take real-time actions on that data. The next step is going from real-time action to creating predictive models. "IoT solutions is going to be the biggest opportunity for all of us." Pretty bold statement, but he's also noting that no one can be everything to everybody.

8:35: Murai is going through CloudSolv, which is Synnex's SMB cloud solution that allows resellers to deal with provisioning, dynamic billing, enpoint management, and more in a single portal. There are some exclusive community benefits for those who are part of the Varnex community.

8:30: "Synnex is investing in the trends that drive growth, but don't ignore the second platform," says Murai. He says it is easy to forget about the more traditional technology, which still comprises a bulk of technology spending. Internet of things driving growth, as well as other areas like cloud computing.

8:25: Murai says cybersecurity is one of the most important headlines, and is urging attendees to take steps to be dilligent when it comes to security. He also says IoT is another area of interest in headlines that he will be discussing. The spend on cloud technologies is going to increase, while general tech spending is in decline. Security going from 70 billion in 2015, and projected to increase to 170 billion in 2020.

8:20:  Revenue growth down in 2015. Murai indicates that is mostly due to increased dollar value and "other foriegn headwinds." Revenue for Synnex is broken down into a nearly 90/10 split between Technology Solutions and Concentrix. Interestingly, operating income from the services side is far greater.

8:13: Sounds like the Dallas Cowboys Cheerleaders may make an appearance later this afternoon.

8:11: Bob's going through the introductions, new members, and accolades.

8:04 AM: Getting ready to kick things off. Technology Editor Matt Whitlock here as your play-by-play announcer for the day, and photographer. It's dark in here and I'm trying to limit use of the flash, so hopefully the shots will turn out okay. Hit refresh to see new posts, and give us a shout out @ChannelProSMB on Twitter and like us on Facebook at http://www.facebook.com/ChannelProNetwork