Lenovo Accelerates into the Data Center 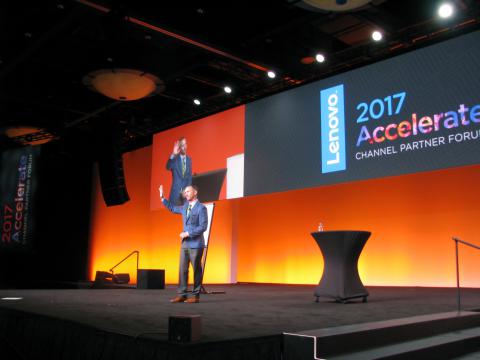 The PC maker’s annual partner conference highlighted plans to focus on the data center and mobility, without leaving its PC legacy behind. By Matt Whitlock
Tweet

2017 MARKS THE SEVENTH annual Accelerate partner conference for Lenovo, an event that has grown just as much as the Morrisville, N.C.-based company’s market share over the same period. This year 1,280 partners descended upon the Walt Disney World Swan and Dolphin Resort in Florida’s Orlando area, once again growing significantly compared with the year prior.

Attendance, however, is not all that’s grown. Accelerate used to consist of six to eight concurrent breakout sessions, but I counted about 25 sessions this year, taking place in separate rooms and in dedicated zones in the expo area. From learning about product lines, to data center hyperconvergence, to sales in vertical markets, Lenovo’s session topics hit nearly every facet of modern IT.

Perhaps the most striking changes at Accelerate are reflected in the products on display. Five years ago, the expo floor was simply a sea of PCs, like innovative ThinkPad notebook designs, desktops, a few workstations, accessories, and in more recent years, a whiff of SMB servers.

Since acquiring IBM’s System x server business, however, Lenovo has gone all-in on servers large and small, while 2017 makes it clear that the PC maker wants to accelerate into the data center at breakneck speed. It’s also ramping up other areas, like mobile and enterprise software, showing a Lenovo that is less razor focused on being No. 1 in PCs, to being competitive (and hopefully No. 1) across a diversified range of products and services.

Focusing on customer feedback is how Lenovo came up with this idea to drop the keys down when the lid is closed to prevent key smudges on the screen.

Lenovo’s message to resellers, despite the vast expansion of its portfolio, has remained simple: Sell, grow, win business, and get rewarded. That message, tied with the company’s dedication to move as much product through its channel partners as possible, has propelled Lenovo into the top market share position for PCs. This year it is rededicating itself to the PC as the backbone of its business, saying it intends to grow by coming out with products that are “different.”

It’s not as if the market for traditional PCs is rapidly expanding, however. Practically all of Lenovo’s PC market share gains in recent years have come at the expense of other OEMs, and realistically speaking, the ability to make massive gains in the PC segment have come to an end. This is particularly true as its greatest competitors in the space, HP and Dell, have been showing strong product portfolios lately.

Lenovo’s Data Center area had amazing interactive displays. Touch any component in the rack and be wowed!

Lenovo knows it, too. The acquisitions of System x and Motorola indicate that the company is looking to mobility and the data center to fuel market share growth in the coming years.

Much of the expo area, in fact, was dedicated to the data center, where Lenovo believes it is uniquely positioned to compete. As a relative newcomer to the space, it’s going full throttle into software-defined and hyperconverged solutions where it doesn’t have a legacy of other hardware to protect.

It’s also an area in which software is just as important as hardware, and last year the company announced its intention to partner with software firms such as Nutanix and SimpliVity to create the next-generation data center, rather than buy those companies to make proprietary solutions. This strategy bit them a few times when Hewlett Packard Enterprise bought up those same partners.

Some might think a strategy shift would be in order, but Lenovo thinks otherwise. The software players in new areas such as hyperconvergence are still changing direction, merging, and getting picked up by other companies. Multiple partners keep Lenovo less dependent on one key player in any given space, enabling it to react more quickly to changes in the market, which the company views as a strength.

Others would argue, however, that competitors making substantial investments in software can develop products with deeper integration, and differentiate those solutions against hardware running marketplace software.

The Moto Z can use Moto Mods, which attach to the back of the phone via magnets to add new features and capabilities.

Since acquiring Motorola, Lenovo has done little to capitalize on it in the United States. Internationally, though, Motorola holds high market share positions in some countries, particularly South America. We should cut Motorola a little slack, given the U.S. market is currently dominated by Apple, Samsung, and to a lesser extent, LG. It’s a tough market to crack, and there have been several companies that have tried and failed miserably.

The idea of being different seems to be the strategy going forward, but not Windows Phone different like HP went with its Elite X3. The Moto Z stands out in a sea of rectangular slabs, thanks to a unique attachment system that allows users to quickly snap on (and off) a JBL speaker, 10x zoom camera lens, additional battery capacity, mini-projector, etc. It’s one of the more interesting mobile handsets in the crowded field of premium smartphones.

Lenovo is also targeting the midmarket with an affordably priced Moto G handset that looks and feels like a high-end device, a welcome choice for many buyers as phone subsidies disappear. For a mass-market play, it’s one of many, but certainly holds its own.

Lenovo is still No. 1 in PCs by far, but not in every PC category. A good example is Lenovo’s lineup of workstations, where it controls far less of the market than in notebooks. The company has a competitive portfolio of products to compete here and in other niche spaces, but is finally shifting some attention and resources into lucrative areas that have often gone overlooked. For example, partners can expect big spiffs for workstation sales going forward, which stack with the rest of Lenovo’s programs.

Addressing these “underleveraged” areas (Lenovo’s words) is where the company hopes to continue finding growth in PCs, even if it means pushing attachments—software, warranties, accessories, and so on. Continued success here gives Lenovo the breathing room it needs to drive growth through heavy investment in the data center—an area in which it has nothing to lose and everything to gain as the cloud expands to power more of our digital world.

Lenovo’s Data Center area had amazing interactive displays. Touch any component in the rack and be wowed!

The Moto Z can use Moto Mods, which attach to the back of the phone via magnets to add new features and capabilities.

Focusing on customer feedback is how Lenovo came up with this idea to drop the keys down when the lid is closed to prevent key smudges on the screen.

ICYMI: Our Channel News Roundup for the Week of June 29th
END_OF_DOCUMENT_TOKEN_TO_BE_REPLACED