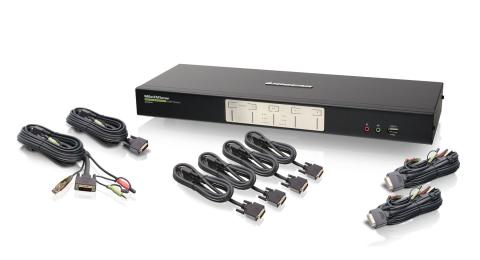 COMPUTERS KEEP GETTING more affordable, but desk space remains at a premium. If you have jobs that can lend themselves to keyboard/video/mouse (KVM) switches, you know the advantages of using one keyboard and display while another computer, if not two or three, are working away.

Thanks to the new IOGEAR GCS1644 MiniView Dual View Dual-Link KVMP Switch, however, you can even let compute-intensive applications like CAD/CAM and desktop publishing churn away while you perform other rigorous operations (or at least check your email) on a different computer, all while using just a single keyboard and monitor. Or, in the case of this IOGEAR switch, two high-resolution monitors.

We tested this KVMP (the P stands for “peripheral”) on a dual-monitor setup. Each time we switched between them, they quickly refreshed and immediately locked in. Our three test systems were using Microsoft Windows 10, which makes the dual-monitor setup process much easier than do Windows 7 and 8.

The GCS1644 comes with all the required cables. Four of the eight DVI cables include a USB connector for peripherals with two audio connectors at the opposite end to link up speakers and microphones. The USB connector also handles attached printers or other devices. While the GCS1644 has only two USB device ports, an inexpensive powered hub will expand that capacity.

After laying out all the cables, we plugged our keyboard and trackball (both use USB connectors) into the MiniView. The two USB ports are labeled, but be sure to watch closely. Since the MiniView’s processor needs to work with every available keyboard and mouse/trackball, plugging it into the wrong port can cause some odd results. A keyboard in the mouse port (both USBs) makes letters duplicate or skip, a problem with all “smart” KVM switches we've seen. IOGEAR includes a PS/2 port to USB adapter cable if your keyboard or mouse still requires those connections.

We installed a new graphics adapter with dual-DVI ports in one PC for this test. Then we plugged an IOGEAR DVI cable into the PC and connected the USB and speaker out audio cable. A second, DVI-only cable was used to attach our second DVI port to the switch. After repeating the process with a second and then a third PC, we went to the KVMP device, verified it was plugged into the wall, and turned it on. We ran two DVI-only cables from the switch to our two test monitors and, at that point, were able to start turning on the computers.

Whether we have the IOGEAR switch or Microsoft Windows 10 to thank, everything came up aces. Our high-resolution monitor ran at 2560x1440 (the top resolution for that model) and the second ran at 1920x1080 without requiring us to touch a switch or change configuration settings. The cursor flowed smoothly between and across the two extended screens regardless of how we arranged the first and second monitors.

We prefer using the hotkey method when switching computers: Hit Scroll Lock twice and then the number of the PC we wanted to connect. The monitor came back on approximately two seconds after switching—it took longer when the display had been turned off and revived, as well as when the computer went to sleep. Both screens on all three PCs blanked out when instructed to by the screen-saver settings.

You can also use the buttons on the front of the KVMP box. Another setting directs the KVMP switch to rotate between all connected PCs to change the monitor contents every five seconds or so (it is widely adjustable).

Our audio connections to the external speakers worked with every computer. We attached an older Samsung 1210 laser printer to the switch using one of the two peripheral USB ports, and the device was visible on all the PCs. The device setup was a snap, and all three of our computers were able to print through the switch without any problems.

Though it is a bit more complicated, you can use different hotkeys to see the display from one PC but hear music from another, and use a USB device on a third or fourth. While we’re not sure why you would need to do that, those capabilities illustrate the versatility of this product.

Switch intelligence always seems to lag behind odd keyboard programming. Some commands, such as F5 to refresh a web page, may not function properly. We tried three different keyboards, and the known brand model performed worst. Special keys, like Home, Sound Off, or Sound Up/Down, may work even if F5 doesn’t. When we turned off emulations to bypass the switch programming, those keystrokes almost always worked, but the hotkeys to switch PCs did not, forcing us to use the buttons on the switch. We feel for manufacturers such as IOGEAR. It’s not easy keeping up with the hundreds, possibly thousands of keyboard variations that are available today.

We’ve been fans of KVM switches since we began regularly testing them with multiple computers. Until now, single-monitor switches have been our only option, so the ability to set up two screens on three different computers, and flip back and forth among them, seemed like magic at first. Then it just felt right. The jury is out on whether we achieved the huge productivity boost some workplace researchers have promised with these switches, but after a short time, we were right at home.

If you don’t need dual monitors, or DVI ports are not available, IOGEAR’s family of switches includes two-, four-, and eight-port units with VGA, DVI, HDMI, DisplayPort, Mini DisplayPort, and Thunderbolt capabilities. Most support a single monitor, but six  models are like this MiniView GCS1644 and drive two monitors.

SPECIFICATIONS AND PRICING (COURTESY OF IOGEAR)

Getting to the Next Level: SWOT Analysis
END_OF_DOCUMENT_TOKEN_TO_BE_REPLACED

Jabra PanaCast Review - Get Your Huddle On
END_OF_DOCUMENT_TOKEN_TO_BE_REPLACED