Introducing the 2017 ChannelPro Visionaries: Our Picks for This Year's Channel Thought Leaders 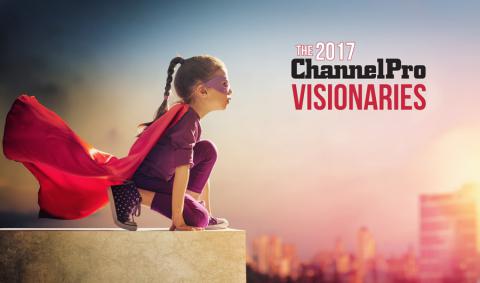 Of all the masterminds and trailblazers in the SMB channel, these individuals got the nod for the past year’s top thought leadership accomplishments.

We’re privileged to knowa lot of sharp people here at ChannelPro-SMB. But it’s a rare privilege to encounter sharp people taking specific steps that show the way forward for the rest of the channel. That’s why we’ve combed through our collective memory banks and pulled together this list of experts, authors, MSPs, and integrators who’ve posted standout thought leadership accomplishments in the last year. They’re our ChannelPro Visionaries for 2017, and we’re pleased to salute them now.

Libis Bueno
CEO and President
Domitek Inc.
domitek.net
Youth unemployment in the U.S. stood at 9.1 percent as of March. Qualified IT security specialists are in persistently short supply. Libis Bueno is making an impact on both problems.

Head of a flourishing managed services practice today, Bueno found himself unemployed and on the streets after arriving to this country from the Dominican Republic at age 16. Prompting from a mentor in the Job Corps inspired him to pursue a degree in computer science, and he’s never looked back.

Indeed, now he’s paying his good fortune forward. Working with the local Chamber of Commerce and the Worcester, Mass., Workforce Central Career Center, he’s partnering with nearby Becker College to create cybersecurity training programs for at-risk youth. If state officials come through with necessary grant money, kids in need of jobs and businesses in need of security assistance will both come out ahead, and Bueno will have added one more accomplishment to a long history of giving back to his community.

Ron Culler
CTO and Executive Vice President
Secure Designs Inc.
securedesigns.com
Peers laughed back in 2001 when Ron Culler decided to focus exclusively on security for SMBs. They’re not laughing now. Culler currently has firewalls in place at more than 8,000 locations, and has a deeper knowledge of security best practices than all but a handful of people in the channel.

That fact recently gave birth to a business idea. If most IT providers aren’t qualified to deliver truly state-of-the-art security support, and don’t have time to learn how, why not do it for them?

Today, Secure Designs offers a packaged bundle of outsourced managed security services to MSPs and others on a white-labeled basis. Culler, who currently chairs CompTIA’s IT security community, has been sharing his security knowledge with others for years. This latest venture gives channel pros an even easier way to tap into it.

Marc Haskelson
President and CEO
Compliancy Group LLC
compliancy-group.com
The Health Insurance Portability and Accountability Act of 1996—better known as HIPAA—is a fiendishly complex law that thoroughly befuddles many a managed service provider with clients in the healthcare industry. The dark truth that Marc Haskelson understands as well as anyone in the industry at present, however, is that even channel pros serious about complying with HIPAA are usually in dire peril of flunking a government audit, for reasons and in ways they know nothing about.

Rather than simply tell MSPs what they do and don’t need to know about HIPAA, however, Haskelson has drawn on his vast, patiently accumulated knowledge of the law to build a resalable solution that automates the difficult task of meeting its requirements. By turning compliance from a confusing obligation into a new service offering, he’s helping IT providers better protect themselves and their clients—and collecting incremental revenue in the process.

That’s why Jim Kennedy continually strives to put technicians in charge of meeting key objectives. Rather than cajole or micromanage engineers about documenting their work promptly, for example, Kennedy empowered them to manage themselves last year by setting up a dashboard they could use to check their timeliness, and offering small monetary rewards for meeting preset targets. Then he divided techs into teams of four as well and offered a second incentive for meeting assigned goals collectively. Those teams, meanwhile, meet every two weeks to measure each other’s progress, compare best practices, and hold each other accountable.

Managers, you’ll notice, play no part in that process, which is but one example of a larger obsession with corporate culture that makes Kennedy a leader among MSPs in turning a committed, supportive workplace into an engine of profitability.

Manuel Palachuk
President and Head Coach
Manuel Palachuk International
manuelpalachuk.com
If you didn’t know any better, you’d think Manuel Palachuk’s whole adult life has been one long master plan to write a book about launching and growing an IT business.

First, he acquired an associate degree in electrical engineering and a bachelor’s in automated manufacturing. Next, he put his knowledge to work in a variety of jobs across the computer and electronics industries, learning the secrets of maximizing efficiency through rigorous processes along the way. Then he applied his systems expertise to running a series of thriving IT and managed service practices.

And now, in his new role as a managed services business consultant, Palachuk has encapsulated his three decades of experience in a book. Getting to The Next Level: A Blueprint for Taking You and Your Business to the Top debuted in January, and while it contains plenty of information about business processes, it offers a wealth of insightful advice as well on establishing a vision, building a culture, measuring success, and beyond.

Jabra PanaCast Review - Get Your Huddle On
END_OF_DOCUMENT_TOKEN_TO_BE_REPLACED