Intel: Hoping for a Haswell Hit 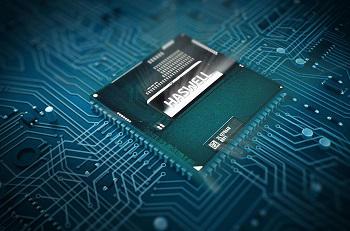 Analysts predict a slow start to Haswell adoption, but with a variation headed for new form factors, that forecast should soon get a lot rosier. By Hank Hogan
Tweet

Like other summer big-budget productions, there's a lot riding on Intel's latest microprocessor, code-named Haswell. And, like other potential blockbusters, even before it arrived in June Haswell was generating excitement - at least among some system builders.

“We've always been a launch partner with Intel, making new products available to our customers on launch day. Our customers have come to expect that of us, so new technology has become a huge sales driver,” says Randy Copeland, president and CEO of Velocity Micro Inc., a custom builder in Richmond, Va.

Even for buyers who aren't ready to take the plunge on day one, there are brand-building positives to being on the cutting edge. Customers will remember that when making a purchase, Copeland believes. He also predicts that Haswell will quickly take over the processor market and be Intel's primary product. Thus, the success of the new chip is tied to the health of the overall PC business.

THE CHIP'S EARLY PROSPECTS
In the short term, though, the chip's prospects don't look good, at least according to the forecast by analyst firm IDC, which has the overall processor market declining by 2.5 percent this year and desktop CPUs dropping by nearly 5 percent. Only server chip shipments will grow, expanding by 3.9 percent. The overall economy, the encroachment of tablets, and a reluctance to accept Microsoft's Windows 8 operating system could also hold Haswell back, at least initially.

By next year, though, things should be looking up, says Shane Rau, IDC research vice president for computing semiconductors. Total shipments should grow by more than 3 percent and mobile processors by 4 percent, he says.

A couple of factors are behind this roller-coaster forecast. For starters, Haswell will initially go into traditional desktop or clamshell mobile PCs with the processor in a two-chip, two-package, performance-oriented configuration, Rau says. There is also another version - a two-chip, one-package, system-on-chip incarnation - intended for newer form factors and designs, such as Ultrabooks and tablet-like convertible PCs. The chip's lower power draw and heat budget mean that it can be mounted behind a screen, which is necessary for a tablet.

But these new form factors must first be designed by vendors, and they will need time to overcome the challenges of taking full advantage of the new processor. “With Haswell, the wider choice of form factors - clamshell PCs, Ultrabooks, convertibles - could take a while for PC OEMs to get used to and implement well,” Rau says.

RISE OF THE TABLET
Most traditional system builders have benefited little from tablets. But Haswell's second variation offers a way to tap into that market and thereby expand the universe of potential customers, says Sergis Mushell, principal analyst, semiconductors, with Gartner Inc. He notes that the number one accessory sold for a tablet is a keyboard, indicating that a substantial market segment is interested in creating as well as consuming content.

The addition of touch input and screens that can be removed or configured in new ways could change the dynamics of the PC industry, Mushell adds. Of course, this assumes that end users accept the new chip and the devices using it, something that has yet to be proven.

In the end, Haswell's success may come down to satisfying a traditional requirement, one that can be expressed as a question posed by buyers. As Mushell says, “The key thing is, 'What's the pricing?'”