ICYMI: Our Channel News Roundup for the Week of November 6th 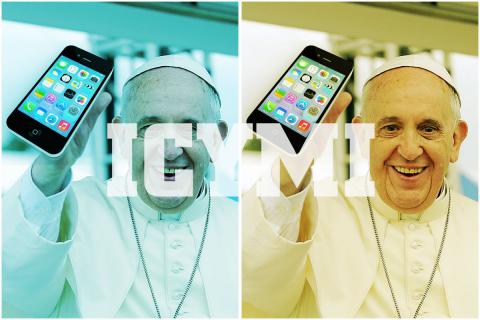 Step away from the leftover Halloween candy and gobble up the week’s news you might have overlooked. By James E. Gaskin
Tweet

Welcome to the painful three weeks when we all try to shed the Halloween candy weight to make room for the Thanksgiving season of shrinking pants and lyin' scales. Too bad waves of news cause stress eating.

Parties and meetings meetings meetings were the agenda items this past week as the Salesforce Dreamforce conference attendees invaded The City By The Bay. No conference, but the mighty collab of Wintel had some news of their own. And no less an authority than the Pope calls out smartphones as tools of the devil, kinda. Catch up on fascinating but under-reported news now.

Salesforce Dreamforce swamps San Francisco with news. Say hello, or maybe start walking, on myTrailhead, a new tool from Salesforce to "reinvent corporate learning and enablement." Trailhead started teaching folks about Salesforce secrets back in 2014, and now myTrailhead lets companies leverage the platform for their own curriculum.

If learning makes you smarter, then myEinstein should take that to the next level with its tools to build custom AI apps across Salesforce with "clicks, not code." Find out if smarter code means more sales.

We already know cooperation helps sales and almost everything else, so add the Quip Collaboration Platform to your Salesforce toolkit and get all teamwork-y.

Tight teamwork can happen between companies too. Google and Salesforce announced the Google Cloud Platform (GCP) as part of Salesforce's international infrastructure expansion.

To keep all these advances organized and ongoing, Intel announced Raja Koduri joins the team as "Intel Chief Architect, senior vice president of the newly formed Core and Visual Computing Group, and general manager of the push for new edge computing solutions." Forget business cards, Raja needs a business poster to hand out.

To relax from all that deep learning, grab one of the brand-new Xbox One X gaming consoles with 4K support.

Don't be surprised, but other companies did some stuff, too (you know, security, clouds, and more). Let's get crypted wid' it: Say hello to new Amazon S3 encryption and security features, including, you guessed it, default encryption.

Visual security displays is the goal for ThreatConnect Dashboards, TC, Manage, TC Analyze, and TC Complete. You can even pull in metrics from outside ThreatConnect.

Anyone have too many trained security experts? Kaspersky Labs wants to give you that problem with its new Cybersecurity for IT Teams Online, an interactive training course. Maybe there's a lesson on the new Kaspersky Threat Hunting services.

The cloud-delivered endpoint protection folks at CrowdStrike say they added a new vulnerability management module to the CrowdStrike Falcon program.

Time to wash your website? If so, check out the new Comodo cWatch platform for free website malware removal and cleanup.

People doing new things, and a portal. Victor Gureghian Baez has been named the new vice president of worldwide channels for Carbon Black. The company now says 90 percent of sales are driven through the channel. C'mon, Victor, make it 100 percent!

TPx added Tanya Palmateer to the group of national channel managers. Palmateer will support the channel throughout the Southwest.

Preparing for Thanksgiving by gobbling now. Think eating an entire turkey leg is a bit much? Then ponder on Broadcom Ltd. trying to gobble, er, acquire Qualcomm Inc.for about $130 billion (with a B).

Proofpoint Inc., a cybersecurity company, signed the papers to gather up Cloudmark Inc., a security firm focused on ISPs and mobile carriers.

Grand View Research Inc., released a study outlining how the global managed services market should reach $82.51 billion by 2025. Mobility services will lead the up-curve, as will private cloud deployment (see above), and healthcare will spend grow more than almost any other group, primarily because of enhanced data security.

Spiceworks surveyed IT department across the U.S., Canada, and U.K. and found that 82 percent of those organizations are using the on-premises version of Microsoft Office. Worse, the study shows the vast majority are running unsupported MS Office suites like Office 2007, Office 2003, and Office XP. Rumors are Office XP has a guest-starring arc on this TV show.

Centrify commissioned a Ponemon study across the U.S., U.K., Germany, and Australia and found 62 percent of customers have had personal information lost or stolen in one or more data breaches. Debate time: 80 percent of customers believe companies have an obligation to secure data better, but only 65 percent of CMOs and 64 percent of IT professionals agree.

The Pope calls cell phone photos during Mass, "a very ugly thing." All the parents, teachers, and managers who think smartphones are the devil have a new ally in the fight against app addiction: the Vatican. Pope Francis is getting darn sick and tired of people taking photos during the Roman Catholic Mass. And he's not just talking about the people—he called out priests and bishops.

Pope Francis has yet to be sighted using a cell phone in public since he got The Hat.

Best move now for Pope Francis? Declare inappropriate smartphone use a sin. Next time in confession you might say, "Forgive me father, for I have sinned, and watched 12 kitten videos during a budget meeting."

Luckily, there's an app for that (download today for iOS and Android).

LG Gram for Business 17 (2020): Big Reasons to Like It
END_OF_DOCUMENT_TOKEN_TO_BE_REPLACED