ICYMI: Our Channel News Roundup for the Week of November 28th 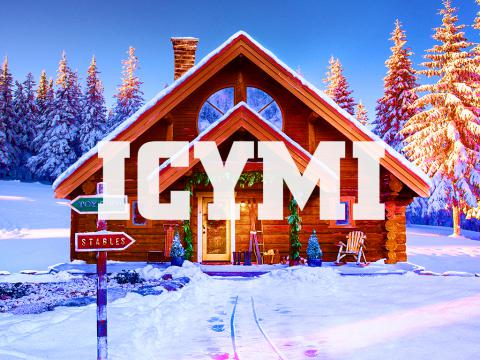 A river of news from Amazon, some pretty big stories from Hewlett Packard Enterprise, and a questionably valued Zillow listing near the North Pole are among the stories we didn’t get to this week. By Rich Freeman
Tweet

As most folks are aware, the tryptophan in turkey doesn’t actually make you drowsy. Or at least it doesn’t make you any more drowsy than the tryptophan chicken has in even greater amounts. So what then explains the fact that more than a week after Thanksgiving, none of us here at ChannelPro can keep our eyes open long enough to write about so much of what’s going on in the technology industry? It’s a question we’d explore in greater depth if we didn’t feel another nap approaching.

Before it arrives, though, here’s a rundown of some stories we would have covered for you this week if we’d been awake a little more often.

So close yet so far. Somehow, despite all the gravy we ingested last week, your ChannelPro news team managed to make it to Las Vegas for the Ingram Micro ONE conference, and even file a few stories. Unfortunately, we didn’t manage to waddle over from that show to any of the three venues right up the street where Amazon Web Services was holding its massive re:Invent confab. And there was a lot going on at that event, it turns out.

Now this is where we’d congratulate ourselves for having prognosticated that artificial intelligence would figure significantly in the news from re:Invent, if not for the fact that it was kind of a no-brainer prediction given how many other serious players in IT have been talking about that topic lately. AWS did its best to one-up its peers, however, by announcing not one or two but three new AI services that developers can use to:

And that, it turns out, was just a warmup. There were also seven new additions to the Amazon Elastic Compute Cloud, two new services for connecting the AWS platform to Internet of Things gizmos and other connected devices, a new SQL querying tool for the Amazon Simple Storage Service, and new compatibility between the Amazon’s Aurora database and the PostgreSQL open source database.

Yet they still weren’t finished! All of the above came to light on Wednesday. The very next day, AWS revealed an incredible 13 more features and services.

Their partners got in on the act too. To site just five representative examples:

How exactly was Hewlett Packard Enterprise supposed to compete with all that? They had the European edition of their Discover partner event going on this week after all, and while they didn’t quite match Amazon’s news gusher headline for headline they did make some pretty significant announcements. We told you about the software and switches their Aruba subsidiary rolled out to make managing and securing Internet of Things hardware easier, but not about:

Oh yeah, Microsoft. Can’t leave them out, now can we? It wasn’t a big week for the gang in Redmond, but they did:

That can’t be all the product news made this week, can it? Nope. In addition to all of the above:

Thinking there may be a little more yet to come? Good for you! Because there were plenty of developments in the vendor community not involving products this week. For instance:

He’s clearly not in it for the money. Santa Claus, that is. Because according to no less an authority than Zillow, the Claus family’s North Pole estate is currently valued at precisely $656,957. Not bad for a 2,500 square foot, 194 year old house within walking distance of nothing but a barn full of reindeer, but you’d think the brand equity Santa has built over the years would translate into something a little more grand. Then again, you have to wonder where that “Zestimate” even comes from? I mean, it’s not like there are a lot of comps to draw on in that neighborhood.