ICYMI: Our Channel News Roundup for the Week of May 7th 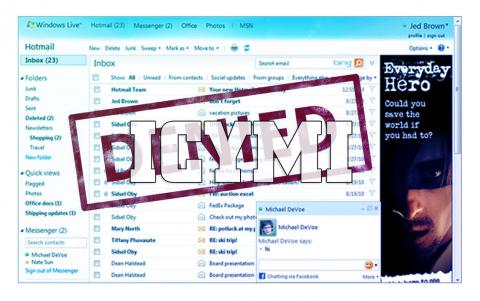 Dirt cheap reserved Azure instances from Microsoft, product news from Nutanix and Red Hat, and disturbing evidence that having a Hotmail account could someday prevent you from getting a loan are but some of the stories we’re finally getting around to this week. By James E. Gaskin
Tweet

The May flowers are finally blooming, at least in most places, and we’re past the dreaded April Tax Day pain. So everything should be aces, right?

Right, aces, because everyone’s going to Las Vegas for various conferences, or maybe New Orleans like the Nutanix folks. Or maybe joining Red Hat in San Francisco. Hmm. We did personally see friends from Lenovo and ServiceNow in Las Vegas, and everything was crowded, so some people are still heading to the Region of Roulette Wheels. Wherever people were, they made more news than we could catch the first time, so let’s catch up.

News from the Nutanix .NEXT conference and Red Hat Summit. Which were in New Orleans and The City, respectively. Nutanix, of hyperconverged infrastructure fame, rolled out a new set of platform-as-a-service offerings under the Nutanix Era label. If you’re a big user of enterprise storage capacity, Nutanix says Era is for you. Use this Era instead for your dirty clothes.

Looking for something more in the vein of a software-defined networking solution? Good news: Nutanix Flow is built for multi-cloud systems and routes secure applications with a single click. And much more, of course.

Third blurb is for Nutanix Beam, a new SaaS tool that provides multi-cloud governance to help manage spending, security, and regulatory compliance across most cloud platforms. Why does Beam Flow Era sound like an 80’s Synthwave band?

Nutanix friends lined up to ride along with new announcements of their own, such as dinCloud using Nutanix Enterprise Cloud OS Software for desktop as a service delivery.

The Red Hat acquisition of CoreOS foretold changes, some of which are coming soon. First steps are underway to integrate CoreOS Tectonic, Quay, and Container Linux with platforms like Red Hat OpenShift.

Microsoft now has the talking stick. Those in the Microsoft Cloud Solution Provider program should hold their breaths (OK, maybe not) for Windows Server and SQL Server subscriptions, which are coming soon. Out now? Azure Reserved Virtual Machine Instances. Make that (paid) reservation in advance and save up to 72 percent on Azure VM pricing, and up to 80 percent on Azure Hybrid Benefits.

Also from Redmond, and announced at Microsoft Build 2018 (not in Vegas but Seattle): a new $25 million AI for Accessibility program, the open sourcing of Azure IoT Edge Runtime, and Qualcomm’s new developer kit for running Azure IoT Edge for vision applications.

Other clouds rain down some news. Sage (cloud business management) can now send invoices via Microsoft Outlook and get paid in a single click.

Believe it or don’t, here’s some NOT cloud news. LivePerson just launched a global partner program to sell its comprehensive conversational commerce solution.

Like big things from small things? Grab an Acer C200 portable projector (pictured) from and send an 82-inch image from 6.5 feet away. Road warriors can bring their own projector when it only weighs 12.43 ounces.

Tired of the crappy modem your internet provider charges you a fortune for every month? Strike back with the NETGEAR 2-in-1 Orbi Tri-Band WiFi Cable Modem System that replaces that monthly money suck with ultra-fast mesh Wi-Fi coverage for homes up to 4,000 square feet. Your house bigger than that? Buy two.

Or buy a new NETGEAR Smart Managed Pro Switch with PoE+ with fiber uplink ports. If your 4,000 square foot home is full of Wi-Fi, IP security cameras, and a batch of IoT devices, the powered ports will get filled fast. You may have to buy two of these as well.

If your data center is too small, unlike your 4,000 square foot house, check out ATEN’s Ultra-Short Depth Dual Rail Widescreen LCD consoles. The space you save may be your own.

Snail mail still matters to many marketers. If you’re one of them, Ricoh just announced Ricoh Return Mail Services. This works to update and help deliver the nearly 6.2 billion (yes, billion) undeliverable-as-addressed (UAA) pieces each year.

Comodo Cybersecurity (guess) and Mission Secure Inc. (aka MSI, and does cybersecurity for the U.S. military and more) teamed up to integrate IT and OT (operations technology) industrial control systems (ICS) with a unified security operations center (SOC). Must be government work with all those acronyms.

The game of tag continues as TPx, ah, tags Michelle Hermann (pictured) to be channel manager for New England.

CompTIA’s new report, titled “Operational Efficiency in the Channel” and based on a December 2017 online survey of 400 U.S. IT firms, found some data nuggets of value. Over half (53 percent) of executives say they have more streams of data to manage and analyze. 45 percent agree that operating the business is more complex than just two years ago. Over half claim current operations are very efficient (20 percent) or mostly efficient (39 percent). Over half point to customer demand as forcing a high degree of business transformation. At least your customers ate talking to you rather than ghosting you.

The Manifest surveyed 351 small business owners and managers from across the U.S. about their investment in social media. Nine of ten (92 percent) expect to invest more time and money in 2018 than before. Most look toward Facebook, the Russia mess and Cambridge Analytics notwithstanding. Almost half (46 percent) moved budget from traditional forms of marketing, and most (53 percent) use in-house staff for the social push. No surprise, larger firms are more likely to use social media advertising.

The latest global managed services market report from Technavio predicts a CAGR of nearly 5 percent through 2022. Note: right now, the Americas are the leading region. By 2022, EMEA will take the lead. Key emerging trend? Quantum computing to help improve security.

Bad technology choices could lower your credit score. The National Bureau of Economic Research analyzed over 270,000 purchases made on a German e-commerce site between October 2015 and December 2016. That site extends credit and tracks each customer’s “digital footprint” (i.e. the “passive information” people reveal about what device, operating system, and email provider they use, among other things). Turns out your digital footprint is every bit as good at predicting your likelihood of defaulting on a loan as your FICO score.

Use Android phones? The NBER’s data says you’re less creditworthy than iPhone users. Of course, people with iPhones may just have more money and better credit in general. But users of “largely outdated email services” like Hotmail and Yahoo defaulted on loans at a significantly higher rate than Office 365 and Gmail users.

Meanwhile, consumers with first or last names in their email addresses were 30 percent less likely to default. Really, would you loan money to “cutie367” or “StudMuffin1992?” Probably not. Put them on the mailing list for your bar? Yeah, but don’t let them run a tab.

FICO scores tend to be fairly crude (did the applicant make all car payments in a timely manner?). Digital footprints can be much more revealing. Luckily, companies in the U.S. tend to stick with FICO and not your Facebook college photos. Tip for StudMuffin1992, though: get yourself a better email address before you apply for that mortgage, just in case.