ICYMI: Our Channel News Roundup for the Week of May 29th 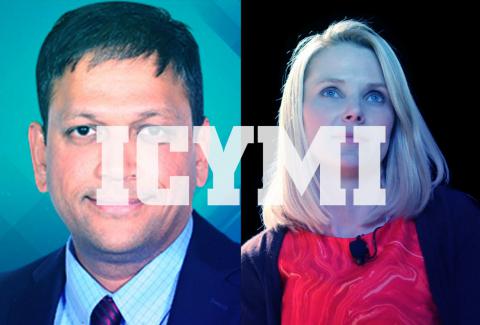 A boatload of new processors, a batch of new PCs containing them, and a list of the most and least liked CEOs in IT are all among the stories we didn’t tell you about this week. By Rich Freeman
Tweet

OK, OK, I know we don’t get around to telling you about lots of stuff until Friday here at ChannelPro. But we really, REALLY should have told you in advance that today is National Doughnut Day, and that Dunkin Donuts and Krispy Kreme are both celebrating with free doughnuts. We sincerely apologize for the lapse.

Now with that out of the way, let’s see if there’s anything else we should have mentioned this week.

How about that COMPUTEX thing? You know the giant technology show that took place in Shanghai this week? Like most giant technology shows, it’s a reliable launching pad for new products and initiatives, and this year at least chipmakers made the most noise. Some highlights:

And following close behind all those processors? Products that utilize them, natch. Such as:

In what could be a worrying sign for Intel, meanwhile, the new all-in-ones and gaming PC that Dell showcased at COMPUTEX all feature AMD Ryzen chips rather than those shiny new Core X-series products.

There was plenty of new hardware containing older processors at COMPUTEX too. Like Samsung’s Notebook 9 Pro (pictured), a 2-in-1 that comes in 13.3- and 15-inch form factors, both of which have a fold back 360-degree touchscreen display, built-in stylus, and 7th Generation Intel Core (i.e. Kaby Lake) processor.

Or that batch of skinny new notebooks from ASUS, including the ZenBook Flip S convertible (10.9mm), ZenBook 3 Deluxe (12.9mm), and ZenBook Pro (18.9mm). The overachieving gang from ASUS had even more goodies on display, by the way, but we’ll let you explore those on your own.

Probably worth mentioning here as well that Intel had more on its mind at COMPUTEX than gaming processors. They also offered up some specifics on the Compute Card platform we all first heard about in January during the Consumer Electronics Show. Looks like the first 4 Compute Card SKUs will reach market in August.

Nothing from Microsoft? Well, not a bunch but Microsoft wasn’t about to leave the 1,800 or so reporters expected at COMPUTEX with nothing to report. So they showed off some virtual and augmented reality headsets from Acer, ASUS, Dell, HP, and Lenovo and talked up a new “Always Connected PC” initiative aimed at creating devices for people who simply must have high-speed internet access at all times. Currently in development, they’ll all have gigabit LTE and eSIM technology and some (from ASUS, HP, and Lenovo) will feature Qualcomm’s Snapdragon 835 chipset as well.

In other news from Microsoft:

And elsewhere in productland...There was this news:

And though they don’t involve products...These additional developments still very much qualify as news:

Ya-pew! Hey, CEOs get paid to produce profits not collect Facebook friends. But we were intrigued just the same when Owler, a sort of crowdsourced “business insights platform,” published its inaugural National CEO Likeability Study. How did the site’s more than 1 million active users rate top dogs in the IT business specifically, we wondered?

Well, that’s their favorite pictured at left. If you don’t recognize him, his name is Srikrishna Ramakarthikeyan, he got a remarkable 98.8 score on a 1-100 scale, and he leads Hexaware, a half billion dollar a year provider of IT and business process services that we’re guessing doesn’t figure in your life on a daily basis. On the other hand, the company’s stock price is up over 70 percent since Ramakarthikeyan became CEO a little under 3 years ago.

And who’s the least liked tech CEO? Well that would be Tom Tovar of Appdome, who may well have sought therapy when he saw the abysmal 6.8 Owler’s community gave him. Who was second to last, though, with a 32.8 rating?

You guessed it! It’s Yahoo! CEO Marissa Mayer (pictured right, of course) and she’s not just the second least liked CEO in techdom. She’s the least liked CEO period in any sector among large public corporations in the U.S. And we’d say something sympathetic at this point, but we’re guessing that $55 million check will ease any pain her Owler score caused her.

The Road to Success Is Paved with Service
END_OF_DOCUMENT_TOKEN_TO_BE_REPLACED

Jabra PanaCast Review - Get Your Huddle On
END_OF_DOCUMENT_TOKEN_TO_BE_REPLACED