ICYMI: Our Channel News Roundup for the Week of May 20th 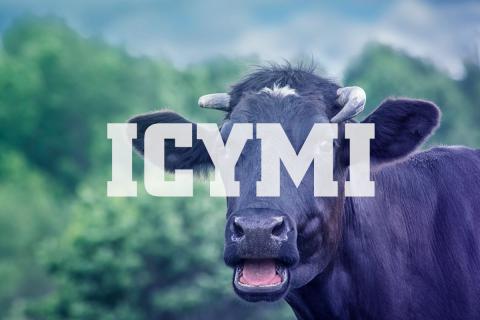 Conference news from Veeam, Citrix, and Synergy, a free book on AI from Microsoft, and an internet challenge that has Austrian cows fighting off would-be suitors are all among the many stories we’ve just now gotten around to reporting. By James E. Gaskin
Tweet

Seems to be a normal spring. On the happy side, the Golden State Warriors swept the Western Conference Finals and are resting as they await their next victim on the way to holding another NBA trophy. On the sad side, spring tornadoes tore up a bunch of mid-American areas like Oklahoma and Missouri this week. If you can help, contact the American Red Cross or the relief organization of your choice. Another sign of spring are the conferences popping up like weeds, all sprouting newsbits, so let’s catch up. 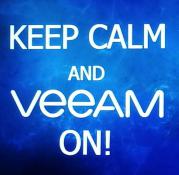 News from VeeamON, Citrix Synergy, and ZertoCON. At the VeeamON conference this week in Miami, Veeam announced the “with Veeam” program to help integrators provide expanded options to their customers. Partners in the program with solutions on the shelf include ExaGrid and Nutanix.

Speaking of shelves, Veeam Availability Orchestra v2 hit the product shelf as well. Need orchestration and automation for more applications and VMs? Check it out. Comprehensive disaster recovery, operational recovery, and platform migrations are just a few of the new goodies.

US Signal (data center), for its part, expanded its Veeam partnership. Now users of Veeam Availability Suite 9.5 can backup and replicate to an offsite US Signal data center.

Over in Atlanta at its Synergy event, Citrix addressed the too-common problem of employees forced to use 11 or more applications during the workday and search for hours and hours for the information they need. Hello to Citrix Workspace, an update to the digital workspace solutions Citrix delivered last year. Maybe work should be hard but figuring out how to do that work shouldn’t be. And good news for Google customers as Citrix Workspace will soon extend to Google Cloud.

Zerto (IT resilience) took to Nashville’s Music City Center for its annual conference, where a roadmap was unfurled (or are they all touch-navigated now?) Either way, Zerto announced a subscription licensing option, integration with the VMware VAIO framework, enhancements to long-term repositories such as HPE StoreOnce, and updates on work with Microsoft Azure. 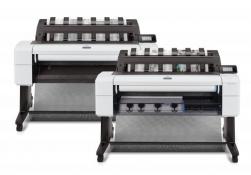 Other product news. Microsoft’s SharePoint Conference saw its share of announcements. A partial list: SharePoint home sites based on an intelligent intranet, innovations in Yammer and Microsoft Stream, more oomph to OneDrive, and upgrades to Microsoft 365 intelligence, performance, and security.

Users of the Salesforce AppExchange will see some new features soon. Consultants make it easier to find the right expert, and the AppExchange Partner Intelligence program gives partners insight into how prospects and customers use the AppExchange listing and solutions.

If all you print are text documents, you may not understand the aggravation specialized print users experience. HP announced new printers and applications for architecture, engineering, and construction users who need more than basic printing. The new HP DesignJet T1600 (pictured) and T2600, HP DesignJet XL 3600 MFP, and HP PageWide XL 3900 MFP will help demanding users in demanding disciplines print and scan better and faster.

Say hello to the new IGEL UD2, part of its family of Universal Desktop endpoint solutions. Smaller in size but faster, the UD2 ties in easily with the IGEL Universal Management Suite.

Nimble (social-friendly CRM) now supports Microsoft Azure. Tagged as the simple CRM for Office 365, its ease of use appeals to small workgroups.

We made it pretty far down the page this week before hitting security. Forescout Technologies released SilentDefense 4.0. Improved productivity, lower risk profiles, and faster mitigation of threats help you frustrate malware miscreants.

Non-product vendor news. Don’t let that SharePoint event fool you. Microsoft is about way more than productivity. You can read all about one area of their non-Office expertise in the new book, “The Future Computed: AI and Manufacturing.” Customers like ABB, Colfax, Jabil, Tetra Pak, Toyota Materials Handling, and ZF talk about their experiences. The eBook is free to download.

Arrow Electronics has a big IoT program that just got bigger. In a global agreement, Arrow teamed up with Infineon and Arkessa to support customers with cellular communications. Infineon focuses on hardware security and Arkessa works on provisioning and management.

Speaking of partnerships, Databricks and Informatica did that dance so they could ingest data quickly into a managed data lake, easily create scalable data pipelines for big data, and provide high performance at scale.

More of an alliance than partnership, but AT&T and Gozio Health linked to expand mobile wayfinding in healthcare systems nationwide.

Exabeam (security) went back to school in a partnership with Deakin University in Australia to boost its cybersecurity degree program.

Coronet (Security-as-a-Service) launched its managed service provider program as an expansion of its existing channel program.

Datto released its third annual State of the MSP Report, a survey of more than 1,600 MSPs around the globe. Good news? It’s a great time to be an MSP, say nearly 100 percent of respondents. 80 percent report recurring services drive a portion of their revenue, and a healthy 44 percent make more than half of their money the recurring way. One reason? Over half (56 percent) specialize in services for a particular industry. Top pain point? Ransomware and cybersecurity, up more than double from 2017 to 30 percent of responses this time.

Zscaler rolled out it’s 2019 report, “IoT in the Enterprise: An Analysis of Traffic and Threats.” The report examined traffic from IoT devices across the Zscaler cloud for 30 days. 56 million transactions from 270 different devices made by 153 manufacturers were examined. Surprise! Security problems! Top concerns were weak default credentials, plain-text HTTP authentications and communication for updates, and use of outdated libraries. In fact, over 90 percent of IoT transactions were over a plain text channel. No wonder people complain about IoT device security. In the words of one of the most bizarre TV show experiments ever, Cop Rock, let’s be careful out there.

Speaking of IoT, low-smart devices are more and more connecting to something smarter on the edge. Hence the new Edge Computing: Decentralizing for Performance in the IoT from Strategy Analytics. Expect to see data processing at the edge of IoT projects 59 percent of the time by 2025. Right now, only 44 percent of companies are using some form of edge computing. Smarter edge devices allow, among other things, more security for downstream IoT devices. 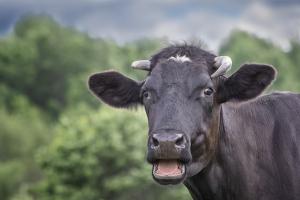 Is this stupider than eating Tide Pods? Maybe. Fox News/FLASH Headlines reports a rebuttal for your non-American friends who say we’re all idiots in the U. S. A. because our teens eat Tide pods. Even dumber? The new Austrian “KuhKussChallenge,” or “cow kissing.” Worse? “With or without tongues.”

People lacking in common sense and probably a sufficient level of self-preservation in Austria, Switzerland, and Germany are actually kissing cows, schmooching mooers, and bussing bovines. Who thinks this is smart? Apparently, the Swiss app Castl which launched this under the guise of raising money for charity.

Veterinarians caution that cows with calves may be overly protective and react in an unfriendly manner. Like, you know, trampling fools getting too close.

Hint: if there’s only one udder, it’s NOT a cow. Moreover, the bull might very well take exception to your unwanted advance and do something bull-like, such as attacking. Unless you have matador training and a red cape, nothing good will come from this.

Jabra PanaCast Review - Get Your Huddle On
END_OF_DOCUMENT_TOKEN_TO_BE_REPLACED