ICYMI: Our Channel News Roundup for the Week of March 5th 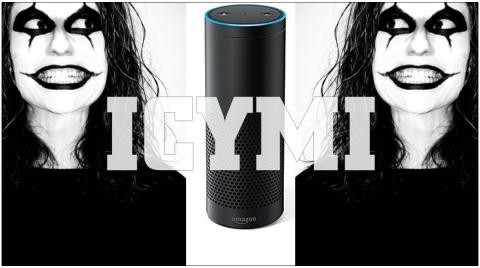 More healthcare IT news than we could handle, a more manageable load of government IT news from Microsoft, and an unexplained burst of laughter from Amazon’s surprisingly creepy Alexa were all among the stories we missed this week. By James E. Gaskin
Tweet

More snow blew into the northeast, including Washington D.C., blowing out another cabinet member. Some in the northeast are kicking their social media fix the hard way: no power. And we learned that non-disclosure agreements outside tech are even weirder than those inside.

Too bad If you needed a doctor to deal with these headaches, because the Healthcare Information and Management Systems Society seized parts of Las Vegas this week. You might have had trouble getting two aspirin to take and call about in the morning, but you could get fairly well-known speakers (Eric Schmidt and Magic Johnson and more). A batch of new products came by too fast to catch, though, so let’s take a closer look.

HIMSS 2018: When med and tech collide. Tech Data put on a white smock and played doctor as it announced enhancements to its HealthPath program. Using the Tech Data Practice Builder methodology, partners can go beyond Band-Aids to build cloud, security, analytics, mobility, and IoT practices.

Wish your doctor was smarter? Let’s see what Intel, Lenevo, and Diaceutics can mix up with some AI special sauce to improve diagnostic testing and treatments.

Those reminder calls that it’s time to get your physical? They could soon be powered by Salesforce and its Health Cloud. The newly expanded edition aims to close the gap between the 77 percent of doctors who wish they had an excellent overall view of each patient and the 14 percent who feel they have that already.

Hewlett Packard Enterprise teamed up with CommVault to deliver tools like the CommVault Clinical Archive and the CommVault Data Platform on HPE infrastructure.

And because performance matters as much in healthcare as everywhere else, IGEL’s Thin Client assessment tool, which is powered by Lakeside Software’s SysTrack Workspace Analytics solution, lets you track metrics like CPU performance, system memory, and disk usage is easier to do than ever.

The Paessler PRTG Network Monitor can now monitor any med-specific tool that supports the DICOM or HL7 protocol.

Speaking of DICOM, Archive360’s Archive2Azure offers an affordable, long-term archive for medical DICOM images, which can be gigabytes in size. Moving them cloud-wards can cut costs by 90 percent in some cases.

Zebra Technologies expanded its family of healthcare-focused mobile computers, barcode scanners, and barcode printers with a new line of direct-thermal and thermal transfer printers. The ZD420-HC and the ZD620-HC offer unique medical features and comply with power and sanitary regulations. And the results look far better than the typical doctor’s handwriting.

Say hello to the Veritas Flex Appliance and the Veritas Access Anywhere software-defined storage boxes. Medical data will double every 73 days by 2020, according to IDC. Gotta put that stuff somewhere.

And as long as your saying howdy to new boxes, toss in a howdy for Nfina’s five newly released and healthcare-friendly premium scalable servers.

Medical folks hate infections, and a new way to avoid same is the Silent Storm Wireless Medical Mouse (pictured). Dunk it in water, put it in the dishwasher, douse it with hospital disinfectants, and it will continue to do mousey things.

Microsoft and Government IT modernization. Microsoft’s push to paint everything in the cloud Azure has inspired government modernization programs in the Commonwealth of Virginia, the VA, the city of Chicago, and even the US Air Force. Turns out clouds help the pilots through clouds.

Microsoft shared plenty of details about all of that at its Government Tech Summit in Washington this week. It also announced that Microsoft 365 for US Government and Azure Stack on Azure Government are now in general availability.

News not health-focused. Turns out there is some. Tech Data sparkled up its StreamOne cloud marketplace with the addition of Cisco Spark and Cisco Umbrella Cloud Solutions.

CenturyLink grabbed some of that Cisco sparkle too as it secured Cisco Powered Cisco Spark Service Provider status. The ‘Link was already a Cisco Gold Partner and a Cloud and Managed Services Master Partner worldwide.

Outside the Gov biz, Microsoft took the opportunity on Windows Developer Day to announce Windows ML, which enables developers to get their machine learning on in the Windows OS. It supports Intel Vision Processing Units now too. Check out Intel’s Movidius Myriad X VPU system on a chip and layer on some Windows ML.

Supermicro rolled out a selection of 25G Ethernet networking technologies with a range of NICs and Top of Rack switch solutions. Anyone here NOT want to make their networks faster?

Sharp turned on some new screens, namely the 50-inch class PN-L501C Aquos Board interactive display system (pictured) and the PN-L401C.

Malwarebytes dragged the Malwarebytes Endpoint Protection icon onto the Mac desktop. You get a single dashboard and the ability to act as a PCI-DSS replacement for traditional AV solutions.

OPAQ Networks added microsegmentation for workstations and other endpoints to its security-as-a-service platform.

SolarWinds knows what people like: Free stuff. Hence the release of SolarWinds Traceroute NG, a free diagnostic tool for tracking performance across networks.

Reinvent Telecom (private-label cloud-based UC and more) added Robocall Blocking to its product portfolio. Now please add a feature to go back down the line and turn the robocaller machine into a brick.

Spectra Logic supercharged its catalog with the Spectra Stack, a scalable and affordable tape library, and Spectra T950v, a new entry-level addition to the T950 Tape Library family.

ON Semiconductor has a new high-density power adapter for notebooks, tablets, and other portable devices. Multiple patents power the NCP1568 and the NCP51530.

CompTIA released the beta version of its new CompTIA IT Fundamentals certification exam.

Bugs tend to be expensive, but Kaspersky Lab now makes them lucrative. Members of the HackerOne bug-hunting platform, which is a Kaspersky partner, can get a check of up to $100,000 for discovery and disclosure of severe vulnerabilities in some products.

Need another option to glom onto $100k? ConnectWise launched Tech Tank, a contest to drive innovation from developers. Submit the best software integration proof of concept and receive up to $100,000 to turn the concept into a working integration.

Data from Q4 gathered and parsed by Synergy Research Group shows a continuing trend upwards for UCaaS growth. Seat additions were 16 percent higher in 2017 than 2016, which was 11 percent higher than 2015. People love to talk, so look for UCaaS to keep growing.

Getting a lot of complaints about malware? SonicWall’s 2018 Cyber Threat Report explains why: There were 9.32 billion malware attacks in 2017. The hackers honed in on more than 12,500 new Common Vulnerabilities and Exposures (CVEs). Ransomware, however, dropped to “only” 184 million attacks in 2017, down considerably from 638 million. Law enforcement is stepping up and arresting more malware authors, but there are still plenty who need arresting.

Alexa is laughing at you. Amazon Alexa users, or a subset of them anyway, had a little “fun” this past week. What some described as a “creepy” laugh burst forth from Alexa without warning or triggering. Perhaps Amazon turned the politeness filter down and let Alexa tell us what she really thinks of us.

Many contend the laugh was less creepy than a bad imitation of Nelson on The Simpsons. And it wasn’t nearly as creepy as this laugh. Besides, without arms or legs, what can Alexa do to you?

Oh, right, she can tell your mother what you’re really buying. That could be bad.

Since AI designers all believe they need more engaging behavior to hook us, perhaps Alexa is just evolving. She’s developing a sense of humor. Or while waiting for you to order her around, she’s checking her phone, just like teenagers.

When Alexa laughs, ask her, “what are you laughing at?” If Amazon wanted to get it right, they’d model her response after teens. She would answer, “Nothing. Quit bothering me.”