ICYMI: Our Channel News Roundup for the Week of March 27th 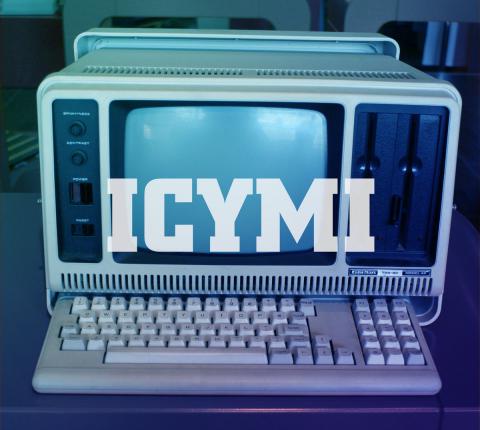 New SMB mobility goodies from Cisco, auto attendant functionality for Microsoft’s Skype for Business, and a whole hiding-in-plain-sight universe of emulators for ancient computers are among the many stories we didn’t get to this week.

Ah, life. One minute you just can’t lose. Every putt finds the cup, every shot drops straight through the net, and every hand comes up blackjack. The next minute you get hit with so much news from Intel, Samsung, SonicWall, SYNNEX, Xerox, and others that you can barely catch your breath, let alone keep up with everything else happening in the IT industry. Let’s just say this past week was a lot like one of those latter minutes before diving into everything we wish we had told you about but didn’t.

Wi-Fi? Why, yes! That’s right, SMBs, there’s no need to take a back seat to your enterprise brethren anymore when it comes to giving employees, customers, and guests zippy wireless network access.

Or so said Prashanth Shenoy, vice president of product marketing, enterprise networking, and mobility at Cisco in a blog post this week announcing a series of freshly minted Wi-Fi networking products for the SMB market. The new offerings start with a new edition of Cisco’s Mobility Express wireless network management software that works together with up to 100 also new indoor and outdoor 802.11ac Wave 2 access points to deliver high-speed connectivity without forcing you to buy and support a pesky WLAN controller.

Unless, of course, your needs expand beyond 100 access points, in which case you can install the new Cisco 3504 WLAN controller and scale the environment to as many as 150 APs and 3,000 end points.

There’s also a new partnership with Apple that ensures iPads and iPhones enjoy seamless roaming and the ability to put high-priority apps in a prioritized performance “fast lane,” plus a host of guest onboarding, analytics, visibility, and control functions.

What does all this mean to Cisco partners? Cisco itself says in press materials that the new products enable channel pros to “expand their sales reach to price-sensitive SMB customers,” reduce installation overhead, and use all those analytics and other bonus features to provide new and profitable services. Then again, Shenoy also says the solution “can be configured in under 10 minutes, without any IT experience,” so maybe it’s not such a big partner opportunity after all. Take your pick, channel pros!

It was a big week for big shows. Yet not, somewhat surprisingly, for big news from either the Digital Signage Expo in Las Vegas or the Enterprise Connect conference in Orlando. In fact, here’s about all we came up with worth mentioning from the former show:

And here are the few goodies we got from DSE:

Microsoft! Surely we can count on Microsoft for some news. Yup. They never fail. In fact, the Redmondians even had some significant Enterprise Connect news concerning Skype for Business, which now has the auto attendant functionality so many VoIP partners and Office 365 resellers have been waiting for, plus call queuing technology that lets you route calls to the next available attendant in the order they were received.

And there was more from Microsoft too. We also learned this week that:

And now, brace yourself. Because here comes a big ol’ product news avalanche:

Not an avalanche perhaps...But there was non-product-related news from vendors this week too:

Maybe we’re not as geeky as we thought. Hat tip to The Register for alerting us to the recent appearance of a new TRS-80 emulator. That’s right, folks! Those of you eager to experience (or perhaps re-experience) the delights of 8-bit computing can now download a virtual version of the immortal Radio Shack “Trash-80” micro computer, complete with virtual floppy drives and everything. It’s free! It’s open source! It runs old TRS-80 software! It...

Wait. New TRS-80 emulator? You mean there are more? Yes indeed, a quick Google search reveals way, way more TRS-80 emulators than one ever knew existed. And Commodore Vic-20 emulators! And Atari 800 emulators! In fact, there appears to be a whole glorious sub-culture of people bringing ancient, long dead computers back to virtual life. How could we not have known this? Or at least suspected it? But then again, why waste time on such questions when we could be playing Robot Attack instead?