ICYMI: Our Channel News Roundup for the Week of March 13th 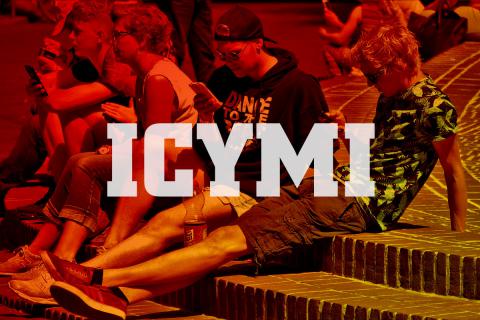 Intel purchasing Mobileye, Microsoft launching Teams, and the silver lining to teenage smartphone addiction are all among the stories we didn’t get around to this week.

Did you know it’s World Sleep Day? Neither do all but a handful of the 7.5-ish billion people on planet Earth, we’re guessing, but the overwhelming majority of them will celebrate anyway in some fashion. As for us, we take our World Sleep Day observances seriously. Seriously enough to get started a few days early, in fact, which might help explain why we once again failed to say much this week about a whole lot of IT news.

Intel inside (your car). Someday, anyhow. In a week somewhat light on truly meaty news, Intel’s acquisition of autonomous driving vendor Mobileye couldn’t help but stand out simply by virtue of the pile of cash it involved, which was equivalent in height to a stack of $1 bills 15.3 billion high. That’s a lot of money to part with for a company in a clearly promising yet still unproven market, but as compelling a sign as we’ve seen lately that CEO Brian Krzanich is dead serious about putting Intel’s desktop processor heritage in the rear view mirror while hurtling rapidly toward a future in more or less every hot, hip new technology category on the horizon, from self-driving cars and 5G connectivity to the Internet of Things and (per a presentation at SXSW this week) artificial intelligence.

And we do mean rapidly. Everything we just linked to happened in the last month, and a glance at Intel’s online newsroom reveals a blizzard of items about various next new things posted just in this still young year. So if you simply can’t wait to know what Krzanich’s next big move will be, don’t worry. You’ll probably find out next week.

Go Team(s)! On the product front, this week’s top story was the official launch of Teams, Microsoft’s new “chat-based workspace” solution. And at first glance, it looks like a worthy alternative to Slack, the collaboration solution that’s both its inspiration and intended victim. True, Slack had 4 million users as of last October, enjoys a sterling reputation among millennial-aged knowledge workers, and offers features not found in Teams yet, including the ability to include people from outside your company in project groups.

But right out of the gate Teams has a few things going for it that Slack will have trouble matching, such as tight integration with a bunch of Microsoft’s widely used productivity applications and a price tag that’s tough to be beat: Zippo, assuming you subscribe to the Business Essentials, Business Premium, or Enterprise E1, E3, or E5 versions of Office 365. The standard edition of Slack, by contrast, goes for $6.67 a user per month (if prepaid annually) and the “Plus” edition costs $12.50 per user per month. One assumes it would take a lot of exclusive capabilities to pull that kind of money from Microsoft’s vast and expanding army of commercial Office 365 users.

In less momentous Microsoft news...We also discovered this week that:

You’d be wise to at least peek at that last set of goodies, by the way. Building re-sellable intellectual property is one of the most viable ways to strengthen profitability in the age of low-margin cloud solutions.

If Esquire handed out a Dubious Achievement Award for IT security...It would go to Adobe, Mozilla, Google, Microsoft, and VMware for collectively issuing what, according to Trend Micro, just may be the biggest monthly load of patches in history this week.

Nothing dubious about these achievements though. Just good solid product news:

And what else lurked in vendor newsrooms this week? How about word that:

The bright side of smartphone addiction. It sure beats drug addiction, no? And while there isn’t a shred of evidence to connect the two phenomena yet, the New York Times says that scientists have begun taking note of the suspiciously coincidental fact that marijuana, heroin, cocaine, crack, and ecstasy use have all been dropping among teenagers during the same 10-year stretch in which smartphone use has been climbing. Indeed, two-thirds of U.S. teens have a smartphone, and they spend over 4 and a half hours a day using them on average. Add in sleep and a little school and that doesn’t leave a lot of time for acquiring or consuming narcotics. Which is to say maybe compulsive Snapchatting and Instragraming are actually healthy in at least one sense.

We’re less sure what to make of the possibility that we might someday receive texts from the dead, however. Per CNN, an employee at an artificial intelligence startup has created an apparently quite authentic chatbot simulacrum of a friend who passed away unexpectedly. We completely understand why, and can imagine the somewhat creepy comfort such a thing might offer. But if loved ones can retain a presence in your life via technology, why not non-loved ones? Could there be an Eternal Troll in our future?