ICYMI: Our Channel News Roundup for the Week of June 4th 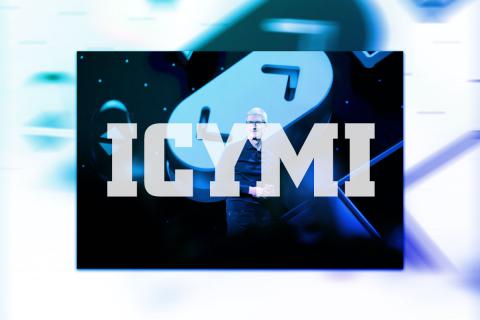 Signage goodness from InfoComm, a barrage of new hardware from ASUS, and a confession by the CEO responsible for the iPhone that he uses his iPhone too much are among the stories we’re getting around to writing about at long last. By James E. Gaskin
Tweet

Welcome to June, and that great conflict for parents: go to another IT conference or your kid’s school graduation? Here’s some stories that got by us the first time as we weighed that decision.

Or turn any window or glass surface into an image display with LG’s new Transparent Color LED film (pictured). The 1.5mm thick stuff curves to fit and can even be used on tall glass elevator shafts.

Since there are never enough charging ports or cables, take a gander at Belkin’s latest goodies, like the Boost Charge 8-Port Charging Station and Multiport to HDMI Digital AV Adapter.

SAP Sapphire NOW. Yes, another conference! Where SAP talked about many things, including the SAP S/4HANA Cloud enabling intelligent ERP, and much more.

ASUS-o-rama (at Computex Taipei, yet another conference). ASUS told us all about a big new batch o’ goodies. Look for a complete lineup of 802.11ax routers like the ROG Rapture GT-AX11000 (targeted at gamers), the ASUS AiMesh AX6100 WiFi System (all mesh-ed up), and the ASUS RT-AX88U turned for performance and easy configuration to reach market in Q3.

Need a bigger screen than the ROG Phone’s 6 incher? Try the new ASUS ZenBook Pro 15 (UX580). The touchpad is a 5.5 inch HD IPS display with custom controls for apps such as Microsoft Office and YouTube. Newest Intel CPUs, of course, along with up to 16GB RAM, and a GeForce GTX 1050 Ti graphics module.

Or try one of the new ASUS ViVoGook laptop models like the S15 (S530) or S14 (S430). Five vibrant color options available for the thin and light laptops.

Computex is a big show for Intel, of course, and the chippers had plenty to show and discuss. Mobile chips, for one thing, like the 8th Gen Intel Core Amber Lake Y-series with double-digit performance gains and now including integrated gigabit Wi-Fi (check out the Whiskey Lake U-Series, too). And goodies like the Optane SSD 905P and limited edition 8th Gen Intel Core i7-8086K processor running at 5.0 GHz turbo frequency.

Some of those same goodies can be found in the new iOS 12 for iPhone (pictured). Along with Do Not Disturb, Activity Reports, App Limits, and upgraded parental settings.

Fewlett Packard Enterprise wants to tell you all about its new HPE Smart Fabric Orchestrator reduced form-factor M-series switches to accelerate fabric adoption. A partnership with Mellanox Ethernet switch technology helps scale from 10G on up to 100G.

Aggravated by the EU’s GDPR now that it’s live? Symantec has some help, including a Control Compliance Suite, DLP Risk Assessment, Information Centric Encryption, and other security slickness.

Symantec also enhanced its Network Security for the Cloud Generation. One nice detail is the web isolation technology woven into the Symantec Web Security Service, which that blocks infections from zero-day malware or advanced threats.

Believe it or not, there’s more. SolarWinds (IT management software) boosted its SolarWinds Cloud portfolio, including AddOptics, Pingdom, Papertrail, and Loggly.

We have all cursed at printers from time to time, but now Xerox has printers that actually listen. Xerox AltaLink MFPs now come with an IBM Watson-powered feature called Gabi Voice, so you can tell your printer to copy, print, fax, scan, and more. Let’s hope Watson and Alexa don’t start talking trash to each other.

Now for something completely different. Forcepoint (cybersecurity) promoted current vice president of sales for EMEA Kevin Isaac to chief revenue officer. Drop by and let Kevin buy lunch if you’re in Reading, England, where he’ll be based.

Logicalis (international IT solutions and MSP) rolled out the welcome mat for Mike Trojecki, vice president of Internet of Things and analytics.

Zoom, fresh from its collaboration with Polycom, developed a new channel charter to make it easier and more profitable for resellers to join up.

Labor market analytics firm Burning Glass Technologies and CompTIA begat CyberSeek, a free cybersecurity career and workforce resource. Why? Because a U.S. Department of Commerce and Homeland Security report on the National Initiative for Cybersecurity Education found 301,873 cybersecurity job openings between April 2017 and March 2018. Generally, there are 6.5 employed workers per job opening. In cybersecurity, that number is 2.5 workers. Not surprisingly, Washington D.C. has the most job openings (there’s a lot of secrets to protect) at 43,200. Second is New York (ditto for lots of secrets) followed by Chicago.

Webroot (cybersecurity) tagged the five riskiest states when it comes to cybersecurity practices. A survey of more than 4,000 individuals determined that Florida ranks highest on the problem scale. Wyoming and Montana followed close behind. Check out the nice infographic and learn that nearly half of all Americans don’t use AV software at all. Sigh. Way to go, New Hampshire, Massachusetts, and Utah (safest, but that’s a relative term in cybersecurity).

Plugable, which makes USB, Bluetooth, and power-related devices, did an online survey of over 1,300 U.S. business users in April. The top three accessories for work are external hard drives, Bluetooth devices, and docking stations. In other words, people still do lots of work at their desks. Over half (56 percent) use one or two monitors. 30 percent say they have three or four monitors. Desk chained?

Who says people use iPhones too much? Apple CEO Tim Cook, that’s who. Those CNN anchors are clever, aren’t they? Laurie Segall, in an exclusive interview with Cook, got the Head Apple to admit “I was spending a lot more time than I should” on his iPhone.

In its quest to “limit constant digital distractions,” we predict Apple will soon release non-digital products. Like the iPencil. Priced at just $69.99, it will include an error-correcting iEraser and Eversharp sharpening module.

Of course, people need someplace to use their new iPencil, since it won’t write on a forearm like the still-in-beta iBicPen. Solution? iPaper, only $1.29 per sheet. Guaranteed compatible with iPencil.

What’s next, Tim? Going to admit Apple’s fat profits are due primarily to early adopters with elevated levels of digital FOMO and too much disposable income?