ICYMI: Our Channel News Roundup for the Week of June 27th 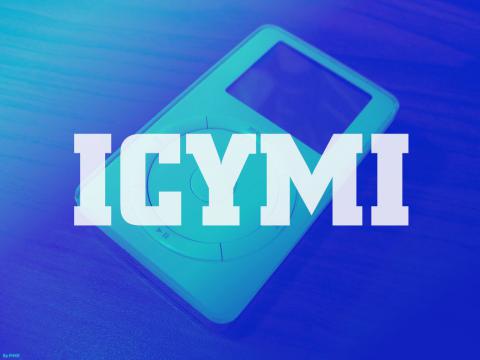 The latest step in the unstoppable march of containerization, the quiet demise of a once king-of-the-hill Office 365 plan, and the crazy expensive sale of a “vintage” Apple iPod are all among the stories you may have missed this week. By Rich Freeman
Tweet

Keep moving, people. Nothing to see here. Oh, that? It’s nothing really. Just the latest armpits-high pile of tech industry news that we somehow managed not to report this week. And as long as you’re going to insist on paying attention to it, I suppose we might as dive in.

It’s your world, containers. We’re just living in it. Still into virtualization? Time to move on. The hip kids are all hot and bothered about containerization these days, and the news coming out of this week’s Red Hat Summit event in San Francisco is just one more piece of evidence (along with Hewlett Packard Enterprise’s recent alliance agreement with containerization kingpin Docker) that the still youthful technology is a good deal more than a fad.

Did we say “one more piece?” Red Hat actually bombarded with us with evidence this week:

There was more too. Get the message? No? Here’s a clue: It starts with “c” and ends with “er” and Red Hat’s all over it.

Oh, and by the way, Red Hat also updated its application server and cloud management platforms this week. Those announcements didn’t get as much attention though, because CONTAINERS!

Even Microsoft got in on the act. The Red Hat act, anyway, if not the container act. In a week that included the announcement that Windows 10 Anniversary Update will ship on August 2nd and the Worldwide Partner Group has a new chief-in-charge, Microsoft also proclaimed that Red Hat Enterprise Linux now supports the brand new .NET Core 1.0 and ASP.NET Core, demoed the recently released SQL Server 2016 running on Red Hat’s OS during a Summit keynote, and introduced a new Azure Resource Manager template that makes deploying Red Hat OpenShift in Microsoft Azure simpler.

Meanwhile, in other coopetition news out of Redmond this week. Microsoft also launched Lightning for Outlook, an add-in for Salesforce that lets users find, view, and update CRM data from inside Microsoft Outlook. Sounds a little like the Project “Medeira” solution the Softies have been previewing since April and a lot like CRM for Outlook, no?

No one made much fuss about it...but as long as we’re yakking about Microsoft it’s probably worth mentioning that yesterday is when they were scheduled to stop selling the Office 365 Enterprise E4 plan, per the plan they publicized last summer. Once the top of the Office 365 line, the E4 plan was rendered obsolete by the newer and more expansive E5 plan, which offers access to PSTN calling plans. Still have customers using E4? Fear not. Microsoft offers not one, not two, but three different ways to take action before they officially turn the lights out on E4 altogether.

And no, we’re not done with Microsoft just yet. Because this week also saw the company:

Your turn, everyone else. Because you sure had plenty of product news this week. For example:

Elsewhere in vendor moving and shaking this week. We got word that:

Get some sleep, people. Here’s one more stat for you: 14 percent of small business owners say they work 24 hours a day, seven days a week, according to a survey by Endurance International Group. An exaggeration? We certainly hope so, though if it isn’t we’re guessing that the folks in that weary minority weren’t among the 70 percent of poll participants who called owning their own company the best job they’ve ever had.

One man’s (e-)trash is another man’s treasure. H/t to CNBC for alerting us to a recent article in The Guardian about the surprisingly (to us) robust market in “vintage” Apple iPods. In fact, one entirely overeager collector bought a boxed, unopened second-generation iPod on eBay for a whopping $20,000 (give or take a penny).

That then got us wondering what kind of prices even older technologies were fetching these days on eBay, and discovered that you can buy yourself a 1984 HP mainframe for $4,400, a Radio Shack TRS-80 (the classic “Trash-80”) for a mere $275, and an original IBM 5150, the very first of the company’s personal computers, for $1,800 (it would have cost you more than $4,000 in inflation-adjust dollars back when it shipped in 1981, according to Wikipedia).

Heartbreakingly, we also found a Commodore VIC-20 (the very first computer this reporter ever owned) plus cassette storage drive listed at a humiliating $35. Have we no respect for the classics anymore?

ICYMI: Our Channel News Roundup for the Week of July 6th
END_OF_DOCUMENT_TOKEN_TO_BE_REPLACED