ICYMI: Our Channel News Roundup for the Week of June 15th 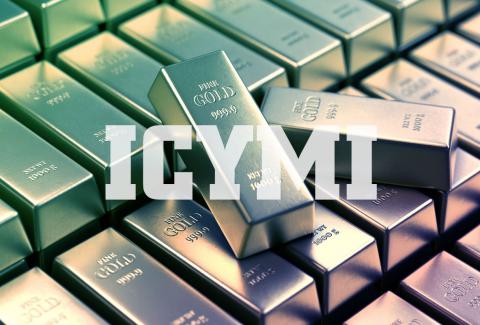 Cisco, Intel, Epson, ViewSonic, and a train passenger who accidentally left behind a bag full of something people normally play closer attention to are just some of the newsmakers whose stories we’re finally bringing your way. By James E. Gaskin
Tweet

Welcome to summer (this Sunday) which may not include baseball for the first time in what feels like 150 years. At least not in America. But you can watch Japanese baseball if you can find it online. Their 12-team league started today, June 19, but yesterday for them (pesky International Date Line). That league will play 120 games and finish up their regular season on November 7. As they say in Tokyo, Shiai kaishi! (Play Ball! according to Google Translate). 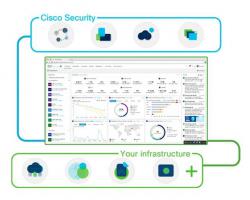 Cisco news. Did you catch CiscoLive! Digital? News galore, like a new way to secure all those new remote workers. Cisco SecureX, an integrated cloud-native cybersecurity platform, will hit the streets everywhere on June 30th.

What about Webex you ask? Demand has more than tripled normal volume. Updates announced this week include more capacity, more security, and the Cisco Webex Control Hub. Integration with Epic, the electronic health record folks, will make telehealth easier for both ends of the virtual stethoscope.

Intel news. Processors have become a security battlefield over the past few years. Hello to Intel’s Control-Flow Enforcement Technology, which arrives as part of Intel’s Security First pledge. Adds CPU-level protection against a common class of malware for Tiger Lake processors.

Take a look (groan—editor) at the Intel RealSense Depth Camera D455, a new stereo-based depth camera with longer range and more precision. Works indoors and out, the optimal range extends to six meters, and is available for pre-order today. 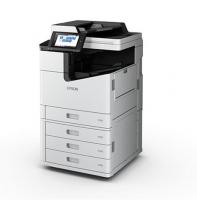 Epson and ViewSonic news. Sometimes you need fast and sometimes you need versatile. The new Epson WorkForce Enterprise WF-M20590F (pictured) monochrome multifunction printer is both. Up to 100 ISO ppm (black) pages with a new PrecisionCore heat-free technology that uses up to 50% less power than monochrome laser printers.

Point the way to your new Epson printer with a new Epson digital signage projector. The revised lineup includes powerful, reliable, and low-maintenance options. Epson PowerLite models boast from 2,000 to 5,000 lumens of color and white brightness thanks to Epson’s 3LCD laser tech up to full HD 1080p resolution.

Many feel there’s still too much paper passed around. To update to digital, financial institutions can take advantage of Epson’s portable, desktop, and workgroup document scanners equipped with OCR and Document Capture software. Check out the DS-870 for high-volume batch scanning and the DS-32000 for long invoices, passbooks, and other oddly-shaped sources.

Who loves cables? Not many. If you don’t, try one of the new ViewSonic Premium Wireless Presentation Displays with native 4K HUD resolution. 65-, 75-, and 86-inch models to choose from.

Need more projectors? The new ViewSonic LS831WU and LS600W projectors are 2nd generation updates. The first is an ultra-short throw laser model, and the second is an LED model engineered for 24/7 operation at 1280x800 dpi. 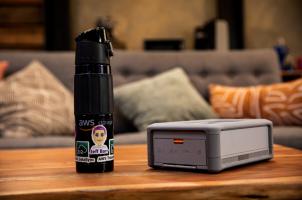 Other product news. Purpose-built for AI and analytics workloads, the new Lenovo ThinkSystem SR860 V2 and SR850 V2 servers include some of those 3rd Gen Intel Xeon Scalable processors we mentioned before. Up to 8 GPUs, 48 internal 2.5” drives, and Intel Optane persistent memory 200 series are just the highlights of all the power.

A new family of storage systems, Dell EMC PowerScale, is engineered to set a new standard for capturing and capitalizing on unstructured data. Runs on the next generation of OneFS, the OS that powers Dell EMC Isilon.

Dropbox downloaded a batch of new features to help the newly-scattered workforce. Dropbox Passwords that sync across all devices, Dropbox Vault for the secret stuff, Mac or PC backup sync, and Dropbox Family for a digital hub. Oh, yeah, and paperless signing inside Dropbox and the new App Center.

Do you trust all those home PCs being used by remote workers now? Of course not. Mayhaps the newly enhanced Nutanix Xi Frame Desktop as a Service can help. Enhanced user experience, support for enterprise profiles, progressive web apps, and an expanded worldwide data center footprint also help you sleep at night.

AWS Snowcone (pictured) sounds like summer refreshment, but it’s really a small, lightweight, rugged secure edge computing device. Also includes up to 8 TB of usable storage and can run on an optional battery. Keys from the AWS Key Management Service are never stored on the device.

Now in a beta available to all IT teams, Acronis Cyber Protect provides a security, protection, and endpoint management solution ready to deploy on-premises. Embeds remote work application protection for those newly-remote workers.

Now that home means office and school sharing space, paper must be printed. The new HP ENVY 6000 printer series has an intuitive user interface and self-healing dual-band Wi-Fi, as well as print, scan, copy, and even fax functionality from mobile devices. Includes access to hundreds of free learning printables.

The RICOH Smart Integration platform, part of the RICOH Cloud Workflow Solutions portfolio, got a major rev with new enhancements. Device-level authentication with different permission levels for services such as color versus black and white printing and the new legal add-on for easier electronic document filing with a court are just two of the goodies.

Worried about security for home routers? NETGEAR Armor cyber protection powered by Bitdefender is now available on Orbi WiFi 6 Mesh Systems and a number of other NETGEAR WiFi 6 routers.

Have some TRENDnet surveillance cameras? Then check out the new TRENDnet Mira professional-grade camera management solution. Includes the Mira app for mobile devices.

Sennheiser TeamConnect Ceiling 2 smart microphones cover rooms so large (between 50 and 60 square meters) that groups can safely distance and still be heard.

According to Extreme Networks, ExtremeCloud IQ is the only cloud network company concurrently operating ISO/IEC 27001 certified cloud management implementations across major public cloud platforms, as well as in private and on-premises clouds.

Belden’s Tripwire and Hirschmann brands announced an extended partnership with Forescout to advance cybersecurity for industrial organizations and critical infrastructure. 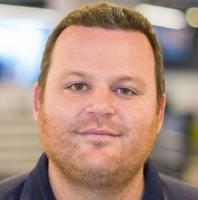 D&H expands its catalog with the addition of Cisco’s Webex, Umbrella, and Stealthwatch. All can be found through the D&H portal.

A significant expansion and updates to the Cohesity partner program include allowing service providers to leverage pay-per-use pricing of Cohesity’s suite of data management services.

Schneider Electric partnered with AVEVA, Lenovo, and Stratus to enable better IT/OT convergence via its energy management and automation.

IT Glue/Kaseya released its third annual Global MSP Benchmark Report. No surprise: there was a major shift in the MSP space caused by the coronavirus pandemic. More than 1,500 MSPs were surveyed in February 2020 and again in May after the pandemic clamped down. 74% are worried about the impact of a second quarantine in the fall of 2020. Just over half (51%) saw a drop in monthly revenue and 29% saw accounts receivable increase. Top concerns in February were a lack of adequate time to complete work (54%), inability to find good technical employees (53%), changing technologies (32%) and a lack of information sharing (27%). In May, cybersecurity concerns jumped from 27% to 50%. Customer churn and price pressure also worried the MSPs. Kind of good news? Turnover rate pre-COVID was 43.2%, but only 14% after. Customer churn was about the same as the 2019 survey, around 10%, but fewer MSPs lost revenue as a result. Those MSPs in the legal, government, finance, and professional services verticals were more likely to report profits of 20% or more.

Ivanti’s Remote Worker Survey found that 63% of IT professionals found workloads increased 37% after going remote. Top incidents included VPN issues (74%), video conferencing (56%), bandwidth constraints (48%), password resets (47%, thanks to those darn executives who forget their passwords), and messaging issues (also 47%). 66% report a rise in security issues. One in five IT pros rated a lack of communication as their top challenge in this “new normal.” 70% increased VPN access to more employees, 54% set up extra devices, and 52% created more “how to” knowledge articles for employees.

Half of security professionals had no contingency plans in place for COVID-19, according to a new global study from Bitdefender yet to be fully released. Compared to many governments and Fortune 1000 companies, 50% sounds outstanding. 34% worry employees are more relaxed about security working from home. 33% worry about people falling for more phishing attacks. 25% worry that bad actors are targeting the new WFH class of employee.

“The Economic Impact of Cyber Insurance,” from Cowbell Cyber and ESI Thoughtlab found 65% of SMBs are planning to spend more on cyber insurance in the next two years. That compares to 58% of larger companies. But 71% of SMBs have cyber coverage of $1M or less and that’s lower than total past of estimated future losses and expenses from a cyberattack. Life sciences, healthcare, retail/hospitality, and telecom are the most severely under-covered. Both SMBs and larger enterprises rated the possibility of a breach possibility in the next year at 45%. Only 13% said cyber protection was not worth the protection it provides. This despite 55% saying employee-owned end user devices are at the highest risk in two years. 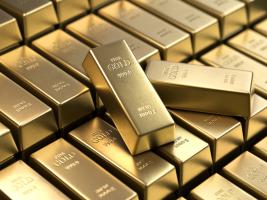 Forgetful Person of the Year award winner. Some items are prone to hiding and getting left behind in taxis, buses, planes, and trains. Phones and laptops, for instance, are left behind by the thousands every day, even they’re expensive items.

But what if you were carrying a package of gold bars worth about $191,000? Wouldn’t that payload be enough to focus your attention?

Yes, for me and you, but not for some unnamed person in Switzerland on a Swiss Federal Railways train from St Gallen to Lucerne. An unknown passenger carrying that package of gold bars left it behind and has yet to claim it.

Nobody knows where the gold bars came from, but “inquiries have been made.”

When that man, or woman, is found, they are guaranteed the Forgetful Person of the Year award.