ICYMI: Our Channel News Roundup for the Week of June 13th 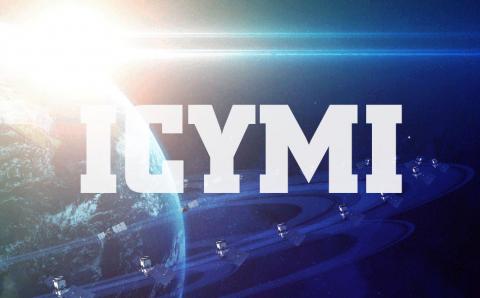 Momentous M&A news from Symantec, less momentous OS news from Apple, and progress toward the long-deferred dream of putting data centers into orbit are all among the stories we failed to tell you about this week. By Rich Freeman
Tweet

ICYMI has been a cherished institution here at ChannelPro since…well, January. That’s still long enough, however, for us to have recapped more neglected but notable stories than the gang here could count on its collective fingers and toes. Yet we doubt we’ve ever failed to tell you about two stories as big as the whoppers we whiffed on this time out. Here’s a look at those and many other stories we really should have covered this week, but didn’t.

First, though, a lame excuse. So why, you ask, didn’t we write anything about Symantec buying Blue Coat or Apple’s latest Worldwide Developer Conference, unlike pretty much everyone else in the news business on planet Earth? Well, we’ve got 26.2 billion reasons for you, as in one each for every dollar associated with the week’s even bigger story: Microsoft’s planned acquisition of LinkedIn. And while we probably shouldn't have let that bombshell distract us quite so thoroughly, we did at least get around to scraping together a few words about it.

On the other hand, we didn’t have much to say about anything else Microsoft did this week, like roll out UI updates to its Office 365 mobile admin app, for example, or partner with Nutanix on a hybrid cloud-in-a-box solution.

But enough stalling already. How about a few belated words about Symantec and Blue Coat? Make that a very few, because you’ve undoubtedly known for days at this point that the cash deal is valued at roughly $4.65 billion and will 1) vault Symantec into the cloud computing era by adding advanced threat protection and web security solutions to its somewhat musty, if widely respected, collection of end point and server security products, 2) produce $150 million in “annual cost synergies” (meaning layoffs, among other things, one presumes) by the end of the company’s 2018 fiscal year, and 3) return Symantec to revenue growth and profitability, at least according to Symantec itself.

The deal will also result in Blue Coat CEO Greg Clark (pictured) taking charge of post-acquisition Symantec, following the announcement in April, amid disappointing financial results, that president and CEO Michael Brown would be stepping down. Clark will have a big job ahead of him, but he’ll take it on armed with a product portfolio better suited to meet rising demand for sophisticated defenses against equally (and increasingly) sophisticated threats.

And with that out of the way, on to Apple’s WWDC. Which attracted as much attention as usual but included fewer blockbuster revelations. Still, since your customers are almost certainly using at least a few Apple devices you should probably be aware that:

Meanwhile, though you’d never know it…companies other than Microsoft, Symantec, and Apple had interesting news this week. For instance:

And from our BFF department. There were these partnership announcements:

When you really, really, REALLY want to keep your data safe. News broke this week that Cloud Constellation has named the executives, scientists, board advisors, and other top minds who will bring its proposed SpaceBelt cloud storage solution to life. Which, to be honest, didn’t interest us nearly as much as the discovery that there’s a company called Cloud Constellation out there hell bent on building a cloud storage solution named SpaceBelt that will house your sensitive data where evil-doers can’t possibly get their grubby paws on it: On a series of satellites, with no connection to the internet whatsoever, serenely orbiting the globe in outerrrrrr spaaaaaaace.

Of course, internet or no internet, you’ve got to figure someone will figure out how to hack their way into Cloud Constellation’s “Information Ultra-Highway” sooner or later, but physical security really shouldn’t be a problem. Unless, that is, that Astronaut Farmer guy suddenly decides to devote himself to a life of cybercrime.

And with that out of the way, on to Apple’s WWDC. Which attracted as much attention as usual but included fewer blockbuster revelations. Still, since your customers are almost certainly using at least a few Apple devices you should probably be aware that:

There’s a new version of iOS on the way that will make taking VoIP calls easier for iPhone/iPad users and provide built-in goodies for users of Cisco wireless networks, Cisco WebEx, and Cisco Spark.

There’s a new version of MacOS coming that will give Mac owners access to Siri, Apple’s digital assistant, for the first time.

Both operating systems will support a new “Universal Clipboard” capable of copying text, images, and video from iOS devices to Macs and back again.