ICYMI: Our Channel News Roundup for the Week of July 24th 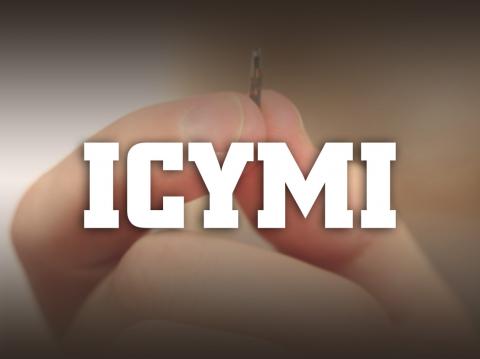 Product news from Black Hat USA 2017, cloud services from GoDaddy, Zoho, and Microsoft, and a great new way to treat your employees like Labrador puppies are all among the stories we didn’t get to this week. By James E. Gaskin
Tweet

Looking toward fall yet? Many consider the second half of July as the “hump day” of summer as they start looking toward autumn for heat relief. As we fan ourselves and sip cool drinks, here’s some security news (always), some good news, and some fun news that may have slipped by.

Trying to find that special bit of nasty business? CrowdStrike expanded their Falcon Search Engine for malware. If your cubicle mate looks dodgy, check out Digital Guardian’s Analytics & Reporting Cloud (pictured), which integrates with their data loss prevention and threat detection and response consoles. And if your cube mate looks subpar, McAfee announced several ways to expand machine learning and automation to “strengthen human-machine teams,” in the quest for better security. More on “human-machine teams” later.

Maybe security people do need help. If they were all that smart, would they schedule Black Hat in Las Vegas in the summer?

If you need a high-performance application streaming service to deliver Windows apps to a desktop browser, Amazon’s GPU-powered AppStream 2.0 (pictured) is ready to go. And container fans should try and cont……trol themselves about the new Azure Container Instances from Microsoft.

On to storage. Flash memory improves as Western Digital announces X4, or four bits per cell, 3D NAND architecture. Lenovo is working with Toshiba’s NVME SSDs and plans to put them into their new ThinkSystem and ThinkAgile servers.

Deals and channels and new faces:

We have fond memories of the Dallas Infomart hosting the very first NetWorld, sponsored by Novell’s NetWare. Glad to see at least one of that pair is still kicking.

Chip me baby one more time. Cyborg paranoia ran rampant after a small Wisconsin company announced a plan to implant tiny RFID chips in employees as if they were Labrador puppies. The goal? Make it easier to open doors, login to computers, use copiers, and pay for snacks in the break room.

Memo to management: if employees keep losing their security cards, lanyards are cheap, effective, and non-invasive.

On the other hand, who among us ever heard of Three Square Market before this story broke? Maybe one of the managers there is a marketing genius and he or she got world attention for their little company. The company also goes by their hipster name, 32M.

Interestingly, 32M sells “self-service micro markets” for office break rooms. Looks like a genius PR move, and all the company had to do was talk a few employees into being chipped like a family pet. Who’s a good employee? You’re a good employee! Here’s your treat!

LG Gram for Business 17 (2020): Big Reasons to Like It
END_OF_DOCUMENT_TOKEN_TO_BE_REPLACED