ICYMI: Our Channel News Roundup for the Week of January 23rd 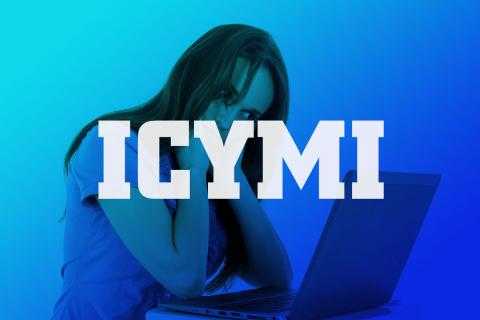 Dueling headline grabbers from Cisco, new FastTrack services from Microsoft, and statistical evidence that sleep deprivation really doezzzzzzz…Where were we again? Oh yes, about to take you through a week’s worth of stories we missed. By Rich Freeman
Tweet

We’ve finally figured it out. Why we can’t seem to keep up with everything happening in the tech industry, that is. Turns out there’s now a quantitatively-validated explanation for our chronic underperformance. We’ll gladly share it with you too, but you’ll have to read through all these stories we didn’t get around to writing up this week first.

For shame, Cisco! You fooled us! We clocked out on Tuesday assuming that the cool all-in-one meeting room solution and conference planning application you released that morning were your big news for the day. And then, boom! Out comes word that you’ve acquired application performance monitoring vendor AppDynamics for $3.7 billion, and right on the eve of its IPO no less.

Let’s start with that cool all-in-one meeting room solution. It’s called Cisco Spark Board and bears a strong resemblance to Microsoft’s Surface Hub and Google’s Jamboard, except that with the help of “ultrasound wireless pairing technology” it lets anyone with a Cisco Spark app on their PC, Mac, tablet, or smartphone share content on a big digital whiteboard with no Bluetooth, Wi-Fi, or wired connection whatsoever.

And get this: The 55-inch edition, which will be available by end of month, lists for $4,990, versus $8,999 for the equivalent Surface Hub. A 70-inch version available later this year will go for $9,990, versus $21,999 for Microsoft’s larger (but not that much larger) 84-inch model. The Cisco solutions require $199 a month subscription plans, however, for cloud service, help desk support, and software updates.

Also new this week is the Cisco Spark Meetings conference planning application, which automatically creates a team space for newly scheduled meetings that attendees can then use to create an agenda, collect presentation materials, capture notes and follow-ups, and generally help meetings make better use of people’s time.

“This is all made possible by the tight integration of hardware, software, apps and the cloud,” Cisco said in its press release for Spark Board and Spark Meetings.

Which brings us back to AppDynamics. Its $3.7 billion sale price is close to twice what the company was reportedly valued at privately as of Tuesday morning. But if you’re a vendor known for hardware that maybe sees potential in integrated hardware/software/cloud solutions that are only worth owning if you can keep their performance strong, spending big dollars on a big name in APM starts to look like a shrewd move.

Or maybe they just wanted to make more money on software. Bold step either way. And allow us to extend a completely and totally unauthorized thank you to Cisco from AppDynamics competitor New Relic for driving its stock price up 8.95 percent as of yesterday’s market close.

Here’s proof that Cisco’s news was kind of a big deal. It overshadowed some reasonably important stories from Microsoft. Specifically, the company reported boffo Q2 cloud numbers yesterday, including a 93 percent year-over-year revenue jump for Azure and a 47 percent gain for Office 365 commercial revenue, and named Kevin Scott (pictured), formerly of LinkedIn, its new CTO. Which is no small thing, by the way, because it’s been a while since Microsoft even had a CTO and past occupants of that post include industry legends Ray Ozzie and Nathan Myhrvold.

What hasn’t changed however, generally speaking, is that direct assistance from Microsoft through FastTrack with tasks that partners make money on, like data migration, is still limited to larger deployments (150 or more seats with respect to Office 365 implementations, for example).

Let’s keep the product news flowing! By noting that:

Good news, bad news. As in good news for LG Display, which reported record profits for its fourth quarter this week. And bad news for digital signage customers, perhaps, because it was rising prices for LCD displays that fueled those big numbers.

This, on the other hand, is all good. For the vendors and people involved, anyway.

Flash! Sleep deprivation makes you sluggish. And Microsoft can prove it, thanks to a recent experiment that tracked 75 million keystrokes and clicks on Bing made by over 30,000 volunteers wearing Microsoft Band fitness wearables. Turns out people process search results more slowly when they don’t get enough sleep. Other less than startling insights in the new study include the revelation that keystrokes and clicks are slower than usual during your first hour or two after waking and at their slowest, on average, at 4:00 am.

On the other hand, this was kind of an interesting application of “population-scale” data collection for research purposes. And we didn’t actually know that the effects of getting six hours of sleep a night twice in a row are visible for the next six days.

In any event, we’ve finally come to the explanation for our perpetual reporting lapses promised to you at the beginning of this piece: We’re a touch slow at catching up with some of the week’s news here at ChannelPro, we now know, because we never sleep.

LG Gram for Business 17 (2020): Big Reasons to Like It
END_OF_DOCUMENT_TOKEN_TO_BE_REPLACED