ICYMI: Our Channel News Roundup for the Week of January 22nd 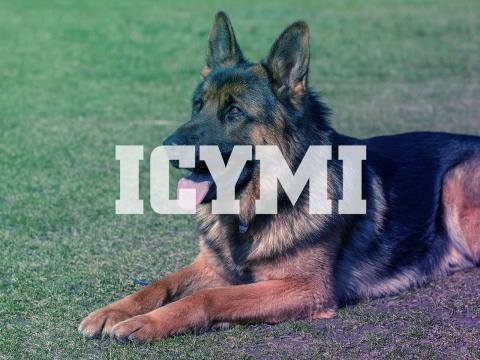 Education products from Microsoft, mesh wi-fi networks from D&H, and every journalist’s favorite—a man bites dog story—were all among the news we really meant to report on this week, but didn’t. By James E. Gaskin
Tweet

This week somehow skipped any seriously depressing headlines, depending on how you feel about the New England Patriots returning to the Super Bowl anyway. Nature didn’t make too many headlines, but justice for guys who bite dogs did.

People who help make other people smart (teachers, corporate trainers, etc.) need a place to find out new smart stuff. Where better than London? To Americans, everyone in London sounds smarter because of that British accent. Accent or not, Microsoft made plenty of smart news this week at the Bett London Smart-Con (not the official name, but it should be).

Smarten Up! Microsoft showed off some shiny new, affordably-priced devices running the Windows 10 and Chrome-esque, student-friendly Windows 10 S operating systems at Bett, including the Lenovo 100e (pictured), an Intel Celeron Apollo Lake powered laptop. Why, yes, it does look a lot like the Lenovo N22 Chromebook with a Celeron processor and a $189 price tag, but at least schools have a choice.

Office 365 got in on the act with personalized learning tools. Office 365 Education is now available for free to teachers in 146 countries, which means schoolkids around the globe will soon learn how to make horrible PowerPoints presos (someone please outlaw the word “preso” ASAP). Another push? “Sparking creativity with STEM” via things like chemistry lessons inside Minecraft: Education Edition. Until that spark is killed by another ponderous PowerPoint, of course.

New Microsoft Education features were announced as well. Sway now makes it easier to let parents monitor student progress. Forms have been revved up with some new goodies. The Teams mobile app now sends assignments to iOS and Android smartphones (if only it could make the students put down those phones and listen to the teacher).

Other news that deserves an A+. D&H gathered together some of its products to make “mesh” Wi-Fi solutions easier to buy and configure. Vendors like Hewlett Packard Enterprise and Cisco are part of the packages.

Speaking of Azure, Microsoft announced that as of this week, Azure Search supports encryption at rest for all incoming data indexed on or after 1/24/18.

News but not about products—grade these on a curve. Tech Data has kicked off the onboarding process for Michael Rabinovitch, who joins the company on March 1 as senior vice president and chief accounting officer.

Meltdown and Spectre flaws in processors made for some nicely scary headlines, but are businesses taking a hit? Spiceworks did a survey and asked where and when organizations are patching against Metldown/Spectre. They found 88 percent of IT pros take this issue seriously, and 81 percent fear Windows OSes will be exploited though these flaws. Two thirds fear the same for web browsers. To fight these issues, 70 percent have started patching already, mostly starting with Windows OSes (57 percent). Those who haven’t started patching worry about problems. Those who have started report performance degradation (46 percent), system hangs or freezes (26 percent), and the publicized boot issues (22 percent). “Other” problems hit 29 percent of respondents.

Continuous testing vendor Tricentis released its fifth annual Software Fail Watch report. Bad news: reported failures, defects, and vulnerabilities were 10 percent higher in 2017 than 2016. Over 3.6 billion people were affected, and $1.7 trillion (with a T) of revenue was lost.

Ah, some better news. Right Networks surveyed 365 accounting professionals and found 54 percent felt “very confident” about the economy heading into 2018 compared to last year. Over 70 percent were “very confident” or “moderately confident” for their businesses for 2018. Tax cuts tend to be popular. But 44 percent of those surveyed still cited winning new customers while keeping existing ones as the top challenge for the year.

Allied Market Research released Unified Communication Market by Application, and Industry Vertical: Global Opportunity Analysis and Industry Forecast, 2016-2023. Valued at $32.88 billion in 2016, the UC space will reach $74.24 billion in 2023. Highest revenue was in North America (42 percent share). Telephony dominated in 2016, but financial services, energy and utilities, and IT plus telecomm will proved the biggest growth opportunities going forward.

Sic’em, officers. Police were called to investigate a reported shooting on Sunday in the town of Boscawen. The report doesn’t say if a person was actually shot, but when police arrived two of the people in the house decided to run away because of outstanding warrants. Nothing says “I’m innocent” like beating feet, right?

The chase was on (cue appropriate theme music). Both men were captured, even though one genius hid under a pile of clothes. When sniffed out by K9 Officer Veda, the miscreant put the dog in a chokehold and bit Officer Veda on the head. Yes, man bites dog. A Boscawen Police Department spokesperson, Lt. Jason Killary, summed it up: “If you get into a biting competition with a police dog, you’re not going to win. They’re pretty good at that.” Other officers rushed in and Tasered the suspect. Looks like you can bring a Taser to a bite-fight.

Luckily, the dog didn’t get rabies from the criminal, and has returned to duty.

Funniest part of this story? Boscawen is not in Texas or Florida, but about a dozen miles northwest of Concord, New Hampshire. Who knew crazy went that far north?

Jabra PanaCast Review - Get Your Huddle On
END_OF_DOCUMENT_TOKEN_TO_BE_REPLACED