ICYMI: Our Channel News Roundup for the Week of January 16th 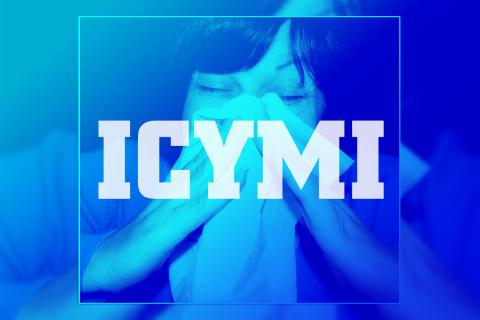 A blockbuster acquisition by HPE, free Windows 10 licenses for (some) Microsoft customers, and what we assume to be the first application of predictive analytics to the common cold are all among the stories we failed to tell you about this week. By Rich Freeman
Tweet

It took a little while, but we at ChannelPro have finally put our post-holiday sluggishness behind us and gotten back in the swing of things! Which in our case means letting important industry news go totally unreported. Don’t believe we’re at full speed again? Check out this giant pile of evidence.

Nailed it! Hey, we may have missed a story or two (or more) in recent days, but you’ve got to admit we were all over the week’s biggest acquisition-related headline.

Actually, there was one other reasonably important acquisition beyond StorageCraft buying Exablox, come to think of it. We probably should have said a word or two about Hewlett Packard Enterprise’s blockbuster $650 million acquisition of hyperconverged infrastructure leader SimpliVity somewhere along the way.

But frankly, there’s only so much to say about that for the moment. We know that we’ll see an edition of SimpliVity’s OmniStack solution suitable for use on HPE’s workhorse ProLiant DL380 servers within 60 days of the deal’s close, and that pre-integrated systems combining ProLiant hardware and SimpliVity software are coming in the back half of the year. Beyond that, we’re mostly left with questions:

Go for broke. As long as you’re going to miss a major acquisition story, why not miss three smaller ones too? We also failed to note this week that:

Wait, there’s more from Oracle too. Because the would-be cloud computing mainstay made a few announcements this Tuesday at its Oracle CloudWorld event in New York City. Specifically, we learned that Oracle Database Cloud Service is now available on bare metal, and that Oracle Cloud Platform now supports 1-, 2-, and 4-core virtual machine “shapes” running on the same virtual network as those aforementioned bare metal compute resources.

Oracle trails well behind market leaders Amazon Web Services, Microsoft, and Google in the cloud but is growing fast, according to recent data from Synergy Research Group, not to mention the company’s latest quarterly earnings report, which showed combined software-as-a-service and platform-as-a-service revenues up 81 percent year over year.

So Tuesday was nice for Oracle, anyway. On Wednesday, the company learned that it’s being sued by the federal government. And it wasn’t the only company to have a tough week. Qualcomm and Avaya could use a hug right around now too, because the former is being prosecuted for anti-trust violations and the latter filed for chapter 11 protection.

And since we name-checked Microsoft a few moments ago…We should note that owners of those subscription-based Windows 10 licenses the software maker introduced at its Worldwide Partner Conference in July can now upgrade PCs running Windows 7 or 8.1 to Microsoft’s latest OS for free.

Also, Clear Linux is now available in the Azure Marketplace. And yes, we know Clear Linux is made by Wintel alliance charter member Intel, but no, we still can’t quite get over “Microsoft heart Linux” announcements like this one.

Really big shew. Oracle’s wasn’t the only conference in NYC this week. The National Retail Federation hosted its annual technology convention (aka “Retail’s Big Show”) there as well. And while it might not have been a really big New York show like Ed Sullivan’s (look it up, kids) and may not have been hugely important to many of our readers, it did provide a nice venue for some high-profile vendors to showcase their latest retail industry wares.

Most notably, Intel CEO Brian Krzanich was there to launch the company’s new Responsive Retail Platform, which combines (what else?) cloud and Internet of Things technology to deliver real-time insights and enable interactive customer experiences. Krzanich also demoed a new Intel-powered droid (pictured) from Simbe Robotics that spares store employees the drudgery of monitoring inventory.

There were other headlines out of NRF’s show, and perhaps predictably for a retail event they all involved point of sale (which is apparently set to be a giant market) or analytics:

Meanwhile, in non-retail product news. There was this:

Remember that wave of executive hirings we told you about last week? Well, it slowed this week, but kept rolling just the same:

Just in time for cold and flu season! There’s still no cure for the common cold, but Fitbit owners can at least know when they’re about to get hit by one. That’s thanks to a new iOS and Android app from Datapult named achu that by studying wellness data and Fitbit biometrics gradually learns to predict when you’re about to get sick. Of course, there’s not much you can do about it at that point other than feel sorry for yourself, but at least you’ll have time to stock up on chicken soup.

While we’re on the topic of cold symptoms and technology, it’s worth noting that Swedish advertising geniuses have taught a poster to cough. These coughs have nothing to do with infections though. They’re part of a pharmacy chain’s promotion for smoking cessation products featuring a “smart billboard” in downtown Stockholm that hacks at you if you walk past it with a lit cigarette, and then suggests buying some stuff for help kicking the habit. And you’ll be the truly smart one, Mr. or Ms. Swedish smoker, if you follow that advice.