ICYMI: Our Channel News Roundup for the Week of January 15th 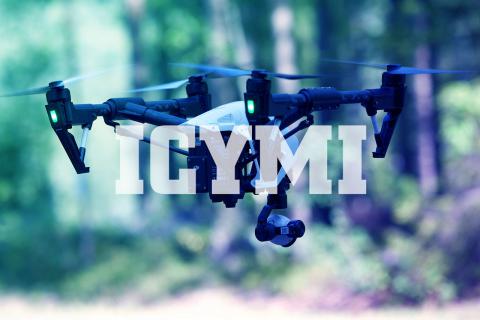 Retail’s Big Show, new directions in distribution, and one less thing to do when you’re drunk in New Jersey are all among the stories we didn’t get around to writing up this week. By James E. Gaskin
Tweet

What a bizarre last few weeks, and we’re not even talking politics. All the holiday fun and games and indebtedness, followed by CES, assorted blizzards, then the National Retail Federation show in NYC, January 14-16. About 50,000 leading or striving retail people braved the weather and huddled inside the Jacob K. Javits Convention Center for warmth. Need a better clue about technology driving retail? The “Chairman’s Circle Sponsors” were IBM, Microsoft, SAP, Toshiba, and, oh yes, American Express.

Now for the question on the frozen lips of everyone up and down the East Coast: where are the snow-shoveling robots?

Will that be cash or credit? Why so many attendees at NRF, aside from the central heating? Zebra Technologies, which makes a wide variety of mobile computers, barcode scanners, and barcode printers used by gobs of retail groups, provided an answer in its 2017 Retail Transformation Study, an examination of the future of retail in North America, Europe, the Middle East, and Africa. Expect retail industry sales to rise three percent annually through 2021 to about $5.5 trillion (with a T), it says. More retail stores opened than closed in 2017, and technology and ecommerce will drive the future.

Those big dollar signs had lots of vendors trotting out new products at NRF, as usual. Toshiba Global Commerce Solutions, for example, used the NRF show to preview the next gen Toshiba Self Checkout solution, a new all-in-one TCx 800 Point of Sale System (pictured), new TCx Dual Station Printer, TCx Sky retail-optimized OS, and some Robotic in-store automation tools. And a bag full of ecommerce and other services.

Epson America, always big in point of sale, rolled out the OmniLink TM-H6000V multifunction thermal receipt printer, other printers inside Diebold Nixdorf kiosks and ATMs, and more, then followed it up with new financing options.

Distributors gear up for future changes as well. Customers with a fear of commitment can now rent hardware through Jenne’s HaaR (Hardware as a Rental) program. Teaming up with GreatAmerica Financial Services puts a twist on the usual Hardware-as-a-Service program. Sounds like yet another example of distis getting in on subscription-based revenues from this vantage point.

MSPs get some attention. Lack of bandwidth provider competition hinders businesses in many locations, and makes the MSPs supporting them struggle. TPx’s Managed High-Speed Internet Access service works with local telecom and cable providers across the country to provide managed voice and data services to virtually any business in the U.S.

SonicWall teamed up with Accelerated, provider of enterprise-grade cellular hardware and software, to bundle its security hardware with Accelerated’s LTE routers (example pictured). Remember that security isn’t a destination but a never-ending journey that often feels like walking barefoot on broken glass. Carrying weights.

More personal than security but just as painful at times, disaster recovery seekers may get some help soon. Tintri (enterprise cloud platforms) announced that it and Neverfail (global cloud IT service provider) have teamed up to develop a comprehensive Disaster Recovery as a Service (DRaaS) platform on top of Tintri’s all-flash storage solution.

Makers, developers, and educators might also rejoice if they’ve been waiting for a better camera to scan 3D objects. Intel put the tape on the box for the RealSense D400 family of “Best-in-Class” depth cameras. Look for the new D415 and D435 Depth Cameras starting now.

Google introed the Security Center for G Suite—analytics and best practices and dashboards and recommendations and more.

Amazon lightened the load of cloud admins struggling to ensure that the resources and services they manage have the capacity they need to handle growing loads. AWS Auto Scaling will now make this easier and more foolproof.

Open Mesh (a Datto business) helps more than 100,000 networks worldwide keep the Wi-Fi bits flowing. More help arrived this week via the new A423 access point, the first from the company to feature 802.11ac Wave 2 technology.

Ivanti, three decades deep into supporting mobility for retail and logistics groups, started spreading the news about its Ivanti Velocity 2.0, powered by Wavelink. Goal is to help accelerate migration to the Android-powered supply chain.

Want a high-res photo of those jacklegs stealing packages off your porch? Or any type of outdoor surveillance? Check out the new D-Link 5 Megapixel Outdoor Dome Network Camera using H.265 video compression.

Think it’s aggravating when your PC’s battery backup fails or passes along dirty power? Try that with medical equipment in the hospital (make sure your will is current first). CyperPower’s Medical-Grade UPS systems, on the shelf now, help keep your various health monitors monitoring and pumps pumping, etc.

News sans products from some of your favorite vendors. GTT Communications, global cloud networking provider, announced a new board member: Julius Erving (pictured). Yep, Dr. J, one of the best dunkers in basketball history. Almost as high-flying is Dr. J Enterprises, scoring billions in revenue and brand value for clients since 1979.

SAP talked up its new “Cloud Accelerator” global initiative, which aims to help its partners expand their cloud business marketing.

Veeam announced the acquisition of N2WS, a cloud-native backup and disaster recovery provider for AWS.

Arrow Electronics teamed up with AT&T on IoT solutions.

Say hello to Flexential, the new tag for the company created in the summer of 2017 when ViaWest and Peak 10 got hitched.

Nintex, the folks in the WCA (Workflow and Content Automation) biz, released a new study showing the top five most broken processes in American companies (surprisingly, not a word about vice presidents gumming up the bureaucracy). The “Definitive Guide to America’s Most Broken Processes” found that a third of employees at large companies (>1,000 workers) are looking for new jobs. 86 percent say broken processes are a driving factor behind the decision (still no VP blame?). A quarter of IT folks blame the CEO, but only 13 percent of total respondents agree. Over 50 percent blame HR (there’s always a VP in HR, so that makes sense).

The IDC Worldwide Quarterly Cloud IT Infrastructure Tracker reminds us of what we already know, but says more of it is coming faster. Spending on the cloud, that is. Outlays for IT infrastructure products like servers, enterprise storage, and Ethernet switches in various cloud environments will reach $46.5 billion in 2017 with year-over-year growth of 20.9 percent. Soon, cloud deployments will account for the majority of IT infrastructure spending overall.

If you aren’t sure about that IDC study, check out the IDC Worldwide Semiannual Public Cloud Services Spending Guide. Public cloud services will total $277 billion in 2021. SaaS is expected to be nearly two thirds of all public cloud spending in 2018.

CompTIA surveyed 700 U.S. business professionals to check on AI, blockchain, and VR/AR awareness and use. Virtual Reality awareness leads with three quarters of respondents aware of the technology. 43 percent believe blockchain is having the biggest impact today. Only one in four companies are making regular use of artificial intelligence, while just over half look to blockchain for greater security. VR/AR pilots are in progress at 23 percent of companies surveyed, with 62 percent of those looking for better employee training, while nearly half want to use the tech for customer engagements.

Leave it to New Jersey to identify a critical American emergency: Drunk Droning. Threats of nuclear war, immigration arguments, and even idiot teenage boys (redundancy?) eating Tide Pods are minor irritations in New Jersey, where they focus on the real threat to America: drunk droning. Not driving, droning. The situation has gotten so out of hand that outgoing Governor Chris Christie, on his last day in office, signed a law prohibiting flying a drone when the operator has a blood alcohol content of 0.08 percent or higher. This must be in reaction to the hundreds of New Jersey-ites killed or wounded so far by drunk droners.

Actually, extensive research turned up the actual numbers: NO ONE has been injured by drunk droning, or at least no one has reported such damage. But if you do start drunk droning in New Jersey, you can be fined up to $1,000 and sentenced to six months in jail.

While in jail, nobody can fly a drone over the wall to drop cigarettes or nail files to you, because the drunk droning law prohibits that as well. You are also now legally prohibited from using a drone in pursuit of wildlife, drunk or not. We assume they mean the drone operator is blitzed, not the wildlife.

Next time you New Jerseyians wonder why people make fun of your state, remember this law. And for Christie’s sake, don’t drone drunk.

‘Phish’ Are ‘Friends,’ Not Food—How Phishers Are Posing as the Former
END_OF_DOCUMENT_TOKEN_TO_BE_REPLACED

Jabra PanaCast Review - Get Your Huddle On
END_OF_DOCUMENT_TOKEN_TO_BE_REPLACED