ICYMI: Our Channel News Roundup for the Week of February 5th 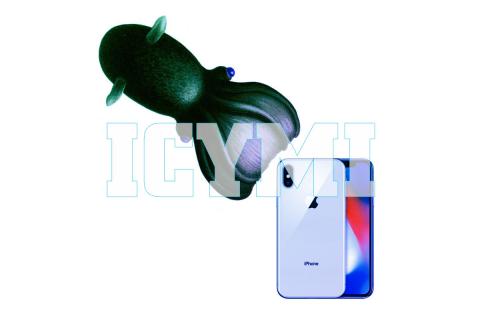 HP revving up its 3D print portfolio, Intel pulling up its SoCs, and the possibility of financial assistance towards the purchase of an iPhone X from a “great vampire squid wrapped around the face of humanity” are among the stories we’re belatedly catching up to. By James E. Gaskin
Tweet

What a fun week for roller coaster fans! On the up side, Elon Musk’s SpaceX launched the Falcon Heavy rocket successfully. Unfortunately, Elon parked his Tesla Roadster in the rocket storage module rather than a garage, meaning it will take a really, really long time for the valet to run out and get it.

Know what else is still trending up? News that zoomed past us like a Tesla on the way to Mars. Here’s some we grabbed as it went by.

HP products rev up. 3D printing has become so common it hardly makes the news anymore. Leave it to HP to rev up the printer product line with the new HP Jet Fusion 300 and 500 series (pictured). Not just a new nameplate, these printers (which list at prices “starting in the $50,000s”) produce functional parts in black, white, and (way cool) full color. Can we place an order now for our Star Trek replicator?

Look up for the new version of the HP Z4 high-performance workstation. Now you can choose between Intel’s Xeon or Core X processors and dual extreme graphics.

HP also amped up products like its HP EliteBook 800 series and HP ZBook 14u/15u mobile workstations. Hook them up through the new HP Thunderbolt Dock G2 to one of HP’s four new 4K displays.

Other big-time vendors need some love, too. Intel’s new Xeon D-2100 system-on-chip aims to power new functions for edge computing, networking, and data center solutions. And Johnny-on-the-spot Supermicro was right there with a product line based on the new SoC. Say howdy to the X11SDV series motherboard.

Teamwork is on display, at least according to Cisco, Apple, Aon, and Allianz. Get cyber resilience evaluation services from Aon and enhanced cyber insurance from Allianz. Cisco and Apple provide the power.

NETGEAR plans to spin off its Arlo products unit, which makes digital cameras (mobile, wireless, and even a baby monitor). The IPO will leave NETGEAR with the majority of shares and didn’t stop the company from introducing its new M4300-96X Stackable 10G and 40G Modular Managed Switch to daylight at the Integrated Systems Europe show in Amsterdam.

And last but not least on the M&A front. Workflow automation kingpin Nintex has a new lead investor: Thoma Bravo, recent acquirers of Continuum and Barracuda.

We always need more security. Microsoft touts improvements in its Cloud App Security and Office 365 Cloud App Security (pictured). As in moving to a user-case driven approach, based on increased visibility into a user’s typical activities.

Kaspersky Lab announced its Kaspersky Threat Management and Defense solution, rolling up multiple security modules and capabilities under one umbrella.

Endpoint protection company SentinelOne teamed up with Phantom and its Security Operations Platform.

Now for some people and deal news:

Mark Briggs moves to the head of the table as CEO of dinCloud, following that company’s acquisition by Premier BPO.

Tina Gravel (pictured), senior vice president of global channels for Cyxtera, has been named to the inaugural Women in the Channel Advisory Council.

IGEL, endpoint management software, expanded its North American IT channel into Canada with a sales office in Toronto. Citrix alum Michael Berman is its first sales engineer the Great White North, and Ken Shipman will be country manager.

Egenera, provider of wholesale, channel-only cloud services to the global IT market, announced that its Xterity Cloud Services is fully compliant with the Cloud Infrastructure Services Providers Europe (CISPE) Code of Conduct for Data Protection.

CompTIA intro’d a new version of its CompTIA Cloud+ certification. More cloud smarts can only help.

Speaking of clouds, the seventh Cisco Global Cloud Index (2016-2021) just came out. Guess what? Clouds keep growing, thanks to both biz and consumer apps. ERP, collaboration, and analytics keep the enterprise’s nose in the clouds. To handle all this, Citrix expects 628 global hyperscale data centers, up from 338 in 2016. By 2021, 94 percent of workloads and compute instances will be processed by cloud data centers.

PagerDuty (a digital operations management vendor) released its inaugural research on the State of IT Work-Life Balance. There’s a balance? Not for a quarter of IT folks who hope to jump from one employer to another to improve their work-life balance. Nearly half (49 percent) of IT folks in the U.S. say that personal life (or sleep) is interrupted between 11 and 30 times—a week. Not a month, a week. Three surveys of over 800 IT pros in the US, Australia, and the UK provided the deets.

Stats for the romantically clueless. Houston Asset Management provides an annual “Cost of Loving Index” based on nine popular Valentine gifts. They’ve been at this since 1990, so pay attention. Good news: prices are about the same as last year. Bad news: while a romantic four-course candlelight dinner for two costs about six percent less this year, you’re almost too late to make a reservation by now. Movie prices are up nine percent, and mushy cards are up 19 percent. Over half of U.S. adults (55 percent) will spend an average of $143.56 on V-Day gifts for loved ones, family, friends, and pets this year. So reclaim some of that work-life balance and stay out of the doghouse.

When you need a loan shark to float your Apple iPhone X, call Goldman Sachs. How did we get here? Apple priced the iPhone X at a grand and up, and credit cards charge amazingly high interest rates based on the fact the Fed gives them money for a pittance. So CNBC, quoting the Wall Street Journal, says Goldman Sachs is offering to step in and provide “easy financing” at Apple Stores.

You know Goldman Sachs, right, the great vampire squid wrapped around the face of humanity? Sure you do. If you’re confused, just look at the current list of Trump administration cabinet secretaries. Six, at last count, are from Goldman Sachs, a trend that some folks worried. Is this draining the swamp or filling it with sharks?

Maybe Tim Cook and other Apple executives have the sense to say no to Goldman. Or maybe Tim will use some of the $261 billion in cash ($200+ billion overseas) to offer decent loan rates to customers dying to pocket the iPhone X.

Nobody asked for a better work-life-squid balance, did they?

ICYMI: Our Channel News Roundup for the Week of November 28th, 2022
END_OF_DOCUMENT_TOKEN_TO_BE_REPLACED