ICYMI: Our Channel News Roundup for the Week of February 20th 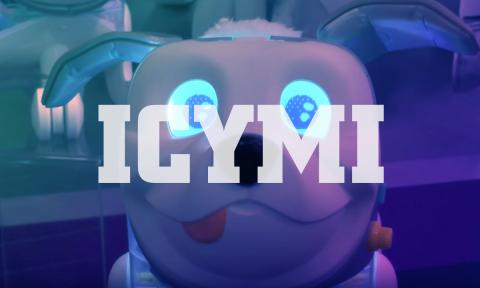 News from the industry’s top chipmakers, announcements from the year’s largest healthcare IT conference, and an early look at the robotic toys that will be creeping you out when the holidays come back around are all among the stories we didn’t get to this week.

Hey, racing fans, it’s Daytona 500 time! And nothing goes with the biggest event in motor sports like chili, amirite? Slow-cooked, home-made chili, involving lots of chopping and a week’s worth of gentle stirring. It kept our hands away from the keyboard for a few days, but it sure smells good in here. Let’s get caught up on what we would have written about if we hadn’t been roasting peppers instead.

Chips ahoy. Remember when the big news from processor vendors had to do with, you know, processors, for desktops and laptops and servers and maybe mobile devices? Those days continue to recede into the distance as leading chipmakers turn their attention to that biggest of next big hardware markets, the Internet of Things. Just take a look at the flood of news from Intel and Qualcomm if you don’t believe us. The first of those companies announced a whole series of products designed to support the high-bandwidth, high-speed 5G networks that will make the sprawling IoT solutions of tomorrow hum along smoothly, including:

Qualcomm for its part made some 5G news of its own, and also announced that it:

ARM got in on the act too, revealing that it has acquired Mistbase and NextG-Com, two vendors with expertise in the NarrowBand-IoT standard that ARM sees as a powerful tool for linking Internet of Things gizmos over secure, low-power, wide-area connections.

Meanwhile, AMD and Samsung went old school. The former announced that the first of its new Ryzen desktop processors will ship next week and the latter pulled the wraps off of its new Exynos 9 Series 8895, a 10nm mobile processor that delivers 27 percent better performance than 14nm predecessors while consuming 40 percent less power.

BIOSTAR, by the way, likes the looks of Ryzen enough to have created its first AMD motherboards.

Just what the doctor ordered. Actually, there probably weren’t all that many doctors at this week’s giant HIMSS conference in Orlando, but there were an estimated 45,000 IT professionals, channel pros, vendors, and experts of various stripes on hand to explore the latest developments in healthcare technology. Here’s a sampling of the new products and initiatives they heard about:

And quietly, just outside the spotlight...Microsoft had a relatively busy, if not terribly momentous, week during which it:

Don’t forget all this! Because you didn’t need to be a processor manufacturer, healthcare technology vendor, or company named “Microsoft” to have worthwhile product news this week. Here’s proof:

And when they weren’t shipping products...Our friends in the vendor world were making news like this:

Coming soon to a nightmare near you. HIMSS wasn’t the only big show going on this week. The Toy Industry Association’s annual Toy Fair took place in New York City as well, giving parents their first look at the tech-infused playthings that will be haunting their dreams come the holidays 10 months from now. I mean, really, what’s not to love about a robotic screaming cat? Or the soul-crushing agony of watching a holographic Barbie, trapped in a plastic prison she can never escape, dance for your pleasure 24 hours a day? For some reason, though, the product that has us most creeped out is this build-it-yourself mechanical dog. One shudders at the thought of waking up to the sight of its eternally eager yet eerily blank, blinking face staring at you and watching your every move. Patiently, patiently watching.