ICYMI: Our Channel News Roundup for the Week of February 19th 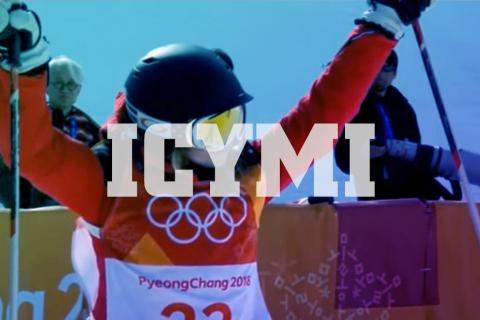 Smarter things from Qualcomm, GDPR help from Microsoft, and the greatest example of event hacking in Olympic history were all among the stories we’re finally getting around to now. By James E. Gaskin
Tweet

What an interesting week this has been. It’s winter, but spring floods abound. The Winter Olympics are going strong (congrats to the U.S. Women’s Hockey Team), meaning fragile human bodies fling themselves down icy mountains at 80 miles per hour while dodging colored flags. And a curling (curling!) athlete gets banned for doping. While our mind was boggled by the fact that curlers get the exact same gold medal as snowboarders who soar 20 feet or more above the halfpipe, while twisting and flipping like a paper doll in a hurricane, we missed some news.

Catch up now with newsbits on Qualcomm, the ever-present torrent of security and cloud and cloud security information, and more. Such as the woman who hacked the Olympic selection process.

Qualcomm spreads out and gets smarter. Those interested in the Internet of Things should check out Qualcomm’s QCA4020 and QCA4024 system-on-chips (SOCs). The announced kits help IoT products tie in with wireless, clouds, Bluetooth, and more.

Wi-Fi for mobile devices got easier with the introduction of the Qualcomm WCN3998. Billed as the first integrated 2x2 802.11ax-ready solution, look for it to appear in smartphones, tablets, and notebooks.

Be safe out there. SentryOne released Version 18.1 of its SentryOne Platform. Fans of SQL Server Analysis Services (SSAS) should check out the SSAS Tabular support.

Palo Alto Networks rolled out a big batch of newness: PAN-OS Version 8.1, the PA-3200 Series (pictured), the PA-5280, the ruggedized PA 220R, and two new models in the M-Series of management appliances.

RiskIQ revved up its Digital Footprint product to keep outsiders outside your network. New goodies include a holistic risk report that points out domain config, SSL, and IP configuration issues.

Up with cloud people. Word from Google: Cloud IoT Core, a fully managed service to help IoT device security and management, can now be had.

Microsoft 365 is now armed to help customers prepare for the E.U.’s General Data Protection Regulation, which goes into effect in May. Azure, Dynamics 365, and Office 365 Business and Enterprise get the most protection.

Chris Essex fills the new position of senior vice president of global sales over at AppRiver.

Ericsson is launching the IoT Accelerator Marketplace for IoT customers and developers, to help them find IoT apps and utilities.

Speaking of marketplaces, Ivanti (security for the digital workplace) pulled the curtain on their own online storefront, the Ivanti Marketplace. Hey, maybe this online sales idea will take off one day soon, and stop all that driving to the local mall.

Maverick AV Solutions (part of Tech Data) signed on to distribute Crestron SR for Skype for Business from Crestron Electronics. High-Def AV meetings should now be easier to setup and manage.

McAfee, along with the Center for Strategic and International Studies, released “Economic Impact of Cybercrime—No Slowing Down.” Worldwide, cybercrime cost businesses close to $600 billion last year. In addition to stolen cash and ransomware, that total includes loss of confidential info, opportunity costs, the cost of enhancing network security, reputational damage, and liability risk. The last number calculated, for 2014, was $445 billion. Anyone else think the Amish may be the smart ones?

Kaseya’s seventh annual 2018 MSP Benchmark Survey shows MSPs have moved away from a break-fix mindset to deliver more value-added offerings. These are powered more by RMM solutions rather than PSA tools, according to Kaseya. No surprise, security gets more attention every year, shown by 65 percent of respondents pulling in more security revenue. Another non-surprise? Cloud services revenue keeps growing.

ABI Research and its Smart Manufacturing Platform Assessment took a close look at the drivers and inhibitors for companies in the Industrial Internet of Things (IIoT) space. Fragmentation appears to remain the watchword, with different definitions of “platform” sowing challenges and confusion. Even so, the IIoT is a $16 billion market in the U.S.

Hacking your way into the Olympics. What is hacking but a clever way to beat the system? What, furthermore, if that system is becoming an Olympic athlete and the barrier keeping you out is a lack of talent? Say hello to Hungarian free skier Elizabeth Swaney. She hacked and went to the Olympics, reaching her dream of becoming a member of one of the more elite clubs in the world, Olympic competitor.

How do you get invited to the Olympics in woman’s free skiing? Go to enough World Cup skiing events and place in the Top 30 each time. Swaney carefully chose events attended by fewer than 30 competitors. Then she slowly slid up and down the giant halfpipe course so she wouldn’t fall. Women who did fall were rated last. For two years. Must be nice to have the time and money to do that.

Of course, as with most hacking, luck plays a factor. The Olympics only invited the top 24 rated skiers. Swaney was rated #34. A few women were injured, some countries didn’t send skiers, and bingo hack-o, Swaney was in.

Unlike a smart hack, though, everyone figured this one out. The Internet, as usual, was warm and forgiving of her putrid performances and claims of “trying to do the best for myself and represent Hungary as best as I can.” Just kidding—the well-deserved online roasting could have melted all the snow on the mountain.