ICYMI: Our Channel News Roundup for the Week of February 13th 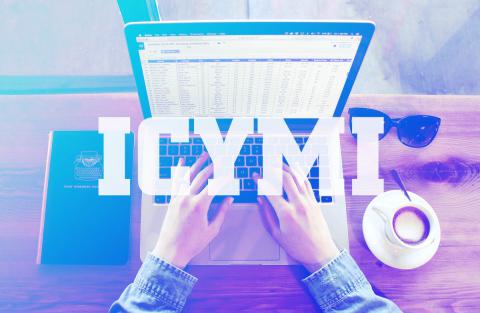 A deluge of security news from the RSA conference, Avaya, and Microsoft, a hybrid cloud alliance between IBM and VMware, and a coffee house in Vienna that makes you pay to plug in were all among the stories we didn’t get to this week.

Warning: You’re about to encounter the world “security” far more times than anyone should have to endure in a single article. But that’s only because there was a ton of security news this week, and the only thing worse than reading “security” over and over again is typing “security” over and over again. So we limited ourselves to this, until now at least. Here’s a look at the latest news, from the world of security and beyond, that we spared ourselves from telling you about.

Light at the end of the tunnel. By our count, we’ve dumped 16 security stories on you in this space over the last two weeks, and that was before RSA’s USA 2017 conference. This week the big event itself finally took place, uncorking one final flood of cyber-safety news. Soak it all up, please, and we promise we’ll leave you alone about security for a while afterwards:

And last but not least, show host RSA has unveiled a new “Business-Driven Security” approach designed to put quantifying and containing business risk at the core of securing a network, as well as updates to its NetWitness Suite, SecurID Access, and Fraud & Risk Intelligence Suite products.

Did we say we’d leave you alone on security for a while? Um, make that a very short while. Avaya had a show of its own this week, and the big product news there was the launch of Avaya Surge, a new solution for securing Internet of Things environments. The system uses compact adapters to turn ordinary IoT gateways into “intelligent network nodes” that filter traffic and segregate it into encrypted zones. Machine learning technology then monitors all that traffic and draws on its observations to make the system continuously more effective.

Not content to leave it at that, meanwhile, Avaya also introduced attendees to a new global channel chief (Walter Denk, pictured) and announced deeper integration between its contact center solutions and Salesforce’s Service Cloud offering.

Surely you’re done with the security stories now, right? Um, not quite, because IBM had one this week too concerning a new offering named Watson for Cyber Security. Essentially, the company force fed its Watson artificial intelligence platform 1 million security-related research reports and is now drawing on the smarts that resulted to help its new Cognitive SOC (as in security operations center) solution act on threats more quickly and effectively.

Watson’s going to be a busy fella, actually, because he will also be fueling a lot of development, demo-ing, and selling at the brand new $200 million Watson Internet of Things headquarters facility that IBM opened this week in Munich, some of which will involve partners like Avnet.

And then there’s the new Watson-powered, voice-controlled whiteboard solution that IBM and Ricoh announced this week, which among other things can instantly translate speech into multiple languages. Pretty cool, but frankly we’re less sold on this feature:

Could be wrong, but it sure sounds like IBM/Ricoh customers are in for a lot of well-intentioned computerized nagging.

Speaking of meetings…We’re a little surprised the new unified communications solution that Amazon Web Services rolled out this week didn’t get a touch more attention, given that it marked hyper-ambitious Amazon’s entry into an entirely new field. Named Amazon Chime, the system delivers (supposedly) HD-quality video and noise-free audio, and lets people join meetings with no pin code and one click simply by answering the automated call they receive when a conference is scheduled to begin.

Maybe there would have been a little more fuss if Chime hadn’t arrived after recent meeting room solutions from Cisco and Intel, not to mention that whiteboard solution from IBM and Ricoh.

Back to IBM. They held their PartnerWorld event this week in Las Vegas, and told folks in attendance that:

And then there was that alliance with VMware. Which sounds a whole lot like the alliance with AWS that VMware entered into last October, in that it will enable IBM partners to sell hybrid cloud solutions combining on-premises VMware technology with off-premises versions of vSphere, vSAN, NSX, and SDDC Manager hosted in IBM’s cloud.

Hmm, first Amazon and now IBM. All VMware has to do is forge a partnership with Google and they’ll basically have Microsoft surrounded.

Ah yes, Microsoft. You don’t suppose they had anything to say about security, do you? Of course you do, and you’re correct, though they chose to say it last Friday after that week’s ICYMI had gone to (virtual) press. Highlights:

Ready for some product news that doesn’t involve security? We thought you might be, and we’ve got you covered:

And what else were vendors up to this week, you ask? This, we answer:

No need to worry…yet. After all, this story about a coffee house in Vienna making customers pay to charge their devices is probably just an isolated instance. But poke around online a little and you’ll find hints suggesting the cranky owner of that café isn’t the only one in the hospitality trade thinking about defraying the cost of all the power their customers are sucking up by charging people for charging, or maybe just making them agree to have more marketing thrown their way.

If you write for a living and do some of that writing in coffee houses, mostly because you’re based nowhere near your employer’s headquarters and go a little stir crazy pecking at keys in your home office all day, you can only hope this doesn’t turn into a trend any time soon. Not that it would bankrupt anyone. It’s just the principal of the thing. We have a deal, coffee houses. We buy a $2 grande Americano and you let us soak up table space, Wi-Fi, and electricity to our heart’s content for as long as we like.

Robin Robins: Reflections on the Eve of Annual Boot Camp

Jabra PanaCast Review - Get Your Huddle On
END_OF_DOCUMENT_TOKEN_TO_BE_REPLACED