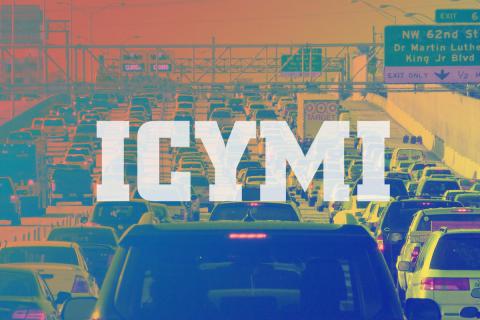 Massive news dumps from VMworld and IFA Berlin, the arrival of Intel’s Kaby Lake processor family, and an application of Big Data firepower to Labor Day traffic patterns with questionable results are all among the stories you may have missed this week. By Rich Freeman
Tweet

Playing nice. The 800 lb. gorilla in the IT newsroom this week was VMware’s annual VMworld event in Las Vegas, and the big (or biggest, anyway) story out of VMworld was the introduction of VMware’s new Cloud Foundation and Cross-Cloud Architecture. The former offering is a private cloud solution based on VMware’s vSphere server virtualization platform, Virtual SAN storage system, and NSX network virtualization system. The latter is a platform for managing and running hybrid clouds that combine VMware-based private clouds (and other onsite infrastructure) with hosted in Amazon Web Services, Microsoft Azure, and the IBM Softlayer, among other public clouds.

And the overarching yet unstated message behind those releases is that as much as we would love it if all our customers based the public portion of their hybrid clouds on our own vCloud Air public cloud, that ain’t happening anytime soon, so we should probably make co-existing with those other, more popular environments easier for our many, many customers.

Not that VMware has given up on vCloud Air, exactly. It also announced some new features for its VMware vCloud Air Hybrid Cloud Manager solution and a new disaster recovery offering for third-party providers of vCloud Air-based services.

And because it’s all about containers and workspace-as-a-service these days…VMware also previewed some enhancements to VMware Horizon and VMware Workspace ONE, the linchpins of its WaaS strategy, and VMware vSphere Integrated Containers, its virtual container host for vSphere users.

And now, brace yourself. Because here’s the first of what stands to be a lot of bullet lists in this post. It’s just been that kind of week. This first list offers up a few highlights from the many announcements made at or in conjunction with VMworld by vendors sensibly trying to glom on to all the media attention surrounding that event. Like, for example:

OK, just one more wafer-thin bit of news from VMware before you explode. The new releases of their Fusion and Workstation client virtualization solutions, due out next week, will support Windows 10 Anniversary Update, Windows Server 2016, and (in Fusion’s case) MacOS Sierra. Better yet, both updates are free, free, free to anyone running the current edition.

But enough about software. Let’s talk about hardware, like the boatload of goodies showcased at the many press conferences held this week ahead of IFA Berlin, the European consumer electronics event getting underway today. They include:

Need a little more evidence that it was a big week for product news? Try this on for size. We’re just now getting around to mentioning that Intel has shipped its 7th Gen Core processor (pictured, but not actual size) Better known by its code name, Kaby Lake, it’s a speedier update to the 14nm Skylake platform that according to Intel is a great fit for watching 4K video and playing compute-intensive games on mobile devices.

As for the other half of the Wintel alliance…Their news kind of got overshadowed this week. But Microsoft did make some product announcements, including:

Winded? Hang in there, because there are still a few vendor announcements not involving products worth knowing about. Like these:

Big Data deal. The only thing most of us hate about Labor Day is the traffic, so we were excited to hear that the folks behind traffic and navigation app Waze have crunched some numbers and come up with specific, data-driven recommendations for avoiding roadway congestion this weekend.

On the other hand, staying out of our cars altogether might be even better advice.