ICYMI: Our Channel News Roundup for the Week of August 21st 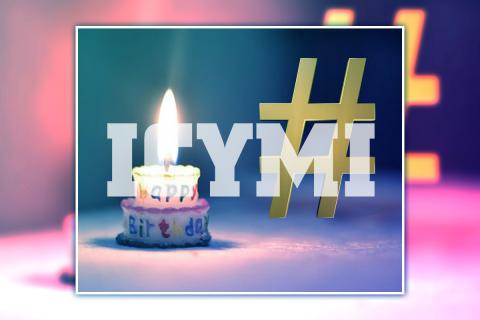 Intel's new processors, Samsung's (so far) non-exploding new Note8 device, and birthday celebrations for the pound sign's rebirth as the hashtag are all among the stories we didn't get around to last week. By James E. Gaskin
Tweet

How nice that science, this time astronomy, took center stage last week and thrilled everyone. We’re talking eclipse and eclipse mania and eclipse exhaustion (overheard: Mom—“It’s historic! It will get dark.” Snarky teen daughter— “Doesn’t it get dark every night?”).

But distracted by the eclipse, we missed a couple of things. OK, multiple things. So here they are. Hey, want to buy some eclipse glasses? Only used once.

Big news from big companies. Chips get faster and smaller because we demand more performance in smaller packages and videos with higher and higher resolution. Intel keeps responding, now with the eighth generation of the Intel Core family. First up: a range of mobile processors.

And speaking of mobile, Samsung roars back into the phone game with the Galaxy Note8, which boasts an Infinity Display, AMOLED screen, and interesting S pen interface. And a great new camera system, just a bit late for the eclipse. To keep that big screen safe, btw, Tech Armor announced a 3D Curved Ballistic Glass Screen Protector that wraps the screen but doesn’t interfere with the sensors or the case.

Doesn’t Project Brainwave sound like a plot from the Cold War? Nyet, it’s a new deep learning acceleration platform from Microsoft that can be plugged into Azure to do artificial intelligence analysis in real time. In more cloud news, Microsoft and Red Hat partnered up to better support Windows Server containers on more platforms.

Security, servers, storage, and clouds that don’t ruin eclipses. Phones deserve to be secure, especially since they hold more secrets than laptops. Hello Malwarebytes for Android, including proprietary anti-ransomware technology. For the Apple crowd, say hello to Malwarebytes for Mac.

If you’re in the federal market, meanwhile, you’ll be interested in the announcement from Thales that its nShield XC hardware security modules and Vormetric Application Encryption solution are now certified to FIPS 140-2.

Supermicro announced it is now shipping a new all-flash NVMe 1U and 2U Ultra Super Servers. Packed with 20 hot-swap NVMe SSDs, the 2U model reaches 18 million IOPS of storage performance.

Tegile Systems just announced its N Series, a line of unified, all-flash storage arrays (like the one pictured) built with NVMe technology.

Want to download every kitten video from the Web? You might need some of Toshiba’s new X300 3.5 inch 8TB internal hard drives. The product line includes 4TB, 5TB, and 6TB versions as well. Then view those videos in your meeting room on the new Toshiba dynaEdge Mobile Mini PC with Intel Unite conferencing software.

Eclipse-friendly cloud news. Ipswitch bumped up the feature list of the WhatsUp Gold 2017 Plus Service Pack 1, including cloud and expanded storage monitoring. Red Hat announced support for .NET Core 2.0 and the latest version of the open source .NET Core project.

Cloud Access Security Broker Skyhigh Networks announced Skyhigh for Cisco Spark for comprehensive security and compliance integration. Not to be left out, Hitachi announced the Hitachi Unified Compute Platform RS Series, a software-defined data center rack-scale platform. Should this be with the server news? Or should the servers be with the cloud news? Hard to tell anymore. On to more stuff we learned last week:

No one can eclipse the joy of the 10th birthday of the #hashtag#. Except us, of course. Like many tech things that have gone wide only to be ruined by the great unwashed, such as the Internet (civilians should have stuck with AOL and been happy to get that), the humble hash mark gets a big fuss made over it. Really?

First of all, why the hash? Perhaps because the @ had been used for email, nobody seemed to want bang (!) or exclamation point, depending on your tech background, so hash was next on the keyboard? That’s it? Wouldn’t $NewMovie or $TaylorDropsNewSingle have worked as well? Maybe ^look up at this with the carat? Doesn’t &MoreCoolStuff work? Couldn’t we splat (*) our tweets?

Second, hash was the least important name for the # symbol. Every phone user knows it’s the pound sign. Think “pound” here: #UforHittingOnMyGirlfriend. Doesn’t that get a certain point across?

Finally, all the cool cats know that’s the sharp sign in music and has been for hundreds of years. Hundreds. Bach. Beethoven. Mozart. Can’t argue with them. And players know that when the lights go on, you best B#.

Choosing IoT Hardware
Enhance Your Sales, Marketing or Cybersecurity Skills: Get 1:1 Time with an Industry Genius
Three Things You Should Do in Response to the CISA Documents
END_OF_DOCUMENT_TOKEN_TO_BE_REPLACED

Jabra PanaCast Review - Get Your Huddle On
END_OF_DOCUMENT_TOKEN_TO_BE_REPLACED