ICYMI: Our Channel News Roundup for the Week of April 9th 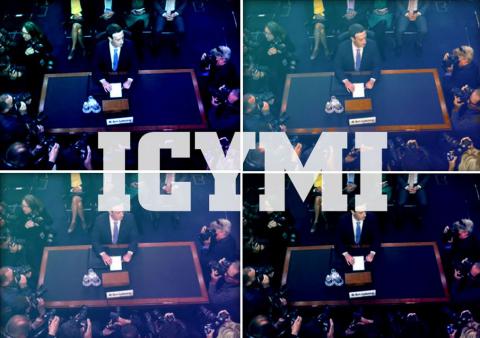 What’s with all the security news lately, what’s new from Qualcomm and Microsoft in IoT technology, and what the Zuck was that Senate testimony all about are among several important questions we’re finally, and belatedly, answering for you. By James E. Gaskin
Tweet

Spring has finally sprung most everywhere, right into the trap of this being Friday the 13th for those with overactive superstition glands. So is it bad luck the Dakotas and nearby states still get some ice? Or the lamest late April Fool’s Day prank?

Most of this week people were packing for the giant RSA Conference next week in San Francisco. Let’s hope nobody tells the hackers all the security experts will spend next week driving rental cars down Lombard Street.

Infoblox (DNS security) did the tighten up (pictured, and look it up, kids) with McAfee as well. Start at the network with Infoblox and extend from devices to cloud with McAfee.

Duo Security and Akamai partnered up to produce a, well, duo of security tools that better protect remote users connecting from out of the network. Yes, 43 percent of remote user logins come from outside the official corporate office and network.

Mimecast (email and data security) announced the Mimecast Global Partner Program. Aim is a primarily channel-focused business, and this channel reorg is one step.

Malwarebytes (malware prevention and remediation) unleashed the Malwarebytes Endpoint Protection and Response solution, which unlike endpoint detection and response systems covers against both signature-based and signature-less attacks.

Say hello to the next generation of Kaspersky Endpoint Security for Business, improved thanks to dynamic machine learning.

Big news from big names for small devices. Take a look at the new Qualcomm Vision Intelligence Platform, using its first family of SoCs built with advanced 10nm FinFET process technology. What does that mean? Powerful computing for on-device camera processing and machine learning across a wide range of IoT applications. Now all your IoT devices will be able to play peek-a-boo like a baby boss.

Big news and bigger hardware. Enjoy your Samsung Galaxy S9 or S9+? You might like it even more with the new Samsung DeX Pad (shipping May 13). Get a desktop interface and easy connections to a mouse, monitor, and keyboard. When finished, slide your desktop back into your pocket.

HP Chromebook x2 comes all apart with excitement at being what HP calls the first Chromebook detachable. These pack 7th Gen Intel Core processors and up to 8GB RAM.

Friday the 13th (of April) is a lucky day for fans of new iPhones. Apple began shipping the new iPhone 8 and iPhone 8 Plus (PRODUCT)RED Special Edition (pictured). Comes in 64GB and 256GB models.

Other products made news, too. Epson expanded its small business and home printer lines with the affordable and compact WorkForce WF-2860 All-in-One Printer and the Expression Home Xp-5100 and Expression Premium XP-6000 Small-in-One Printers (latter pictured). See what they did? “Small-in-one” printer? Hey, we make the jokes here.

TeamViewer (remote assistance and more) has now hooked into Freshservice, after earlier tying in with Freshdesk help desk customer support.

Aerohive Networks revealed that its buzzworthy Comparative Analytics network performance monitoring tool now has new historical reporting capabilities. Learn where you are by looking at where you’ve been.

The AXIS T61 Audio and I/O Interface Series enables you to add audio and I/O connectivity to existing Axis network cameras that don’t have these capabilities built in. Time to upgrade your video customers? Don’t answer before you hear about the new AXIS Companion Eye mini L (small fixed dome camera for indoor use) and the Companion Bullet mini LE (outdoor fixed, bullet-style camera).

Calling all headset lovers: Jabra has a new Engage line of business wireless headsets, including the Engage 65 and Engage 75. Noise-cancelling microphones and 150 meters of roaming room are just two of the cool tricks.

If you need a 4K HDMI over IP Extender, check out ATEN Technology’s VE8950 design, with the VE8950R receiver and VD8950T transmitter.

Western Digital built a microSD card for the particular demands of 4K Ultra HD video surveillance. Get dealt a WD Purple microSD card in capacities up to 64GB.

4K monitors are now affordable, so buy two. When you do, try an IOGEAR 4K DisplayPort KVMP Switch with Dual Video Out and RS-232. Comes in two-port (GCS1932M) and four-port (GCS1934M) versions.

Rackmount Solutions now offers a series of customized Modular Data Centers for uses such as cell towers, space-constrained locations, and even quick turn-time IT upgrades. Need a data center to go? Done, with the mobile option. Ask for five to 40+ racks that can include cooling and generators.

Verizon’s 2018 Data Breach Investigations Report (DBIR) found ransomware accounted for 39 percent of malware-released cases, jumping to the top spot from fourth in 2017. No surprise, the “human factor” continues to be a key weakness. Companies are nearly three times more likely to get breached thanks to the “human factor” than actual system vulnerabilities. After all this time, any phishing campaign still tricks at least 4 percent of folks. We can patch systems. When can we patch the “human factor”?

Details to be provided at the Gartner Tech Growth & Innovation Summit at the end of this month will show total IT spending should grow 6.2 percent to $3.7 trillion in 2018. Hello to the highest growth forecast since 2007. (We do remember what happened in 2008, right? Purely coincidental). Biggest growth for 2018 and 2019 is in enterprise software, but the biggest bucks are in IT services, topping a trillion bucks in 2018 and up to $1.048 trillion in 2019.

More growth, you ask? Yes, according to the Worldwide Quarterly Cloud IT Infrastructure Tracker from IDC. Totals will be over $52 billion in 2018 for year-over-year growth of 10.9 percent. That’s good. Even better for some, public cloud data centers will grow 11.3 percent to grab 65.9 percent of this spending year-over-year. Off-premises private cloud environments will grow 12 percent year-over-year. Nothing but clear sailing and more growth through 2022 when the total will get to about $55.7 billion.

Mr. Zuckerberg Goes to Washington. Nope, not a sequel to Mr. Smith Goes to Washington by any stretch, but more an homage to famed sitcom Hogan’s Heroes character Sgt. Schulz. Two great humor bits in this video include “my team will follow up with you,” which is hysterical if you’ve ever tried to get an answer from Facebook’s public facing support team (or person. It could be only one person. A part-timer). And Zuck, Mr. Micro Manager of the year, appears to know nothing about anything.

Senator Durbin started a great line of questioning (“Would you be comfortable sharing with us the name of the hotel you stayed in last night?”) but then quit far too soon. Would Zuck like to tell us how many firms besides Cambridge Analytica slurped up millions of data records with stupid quizzes? No, he would not. Would he be willing to explain why Facebook tracks people’s location via cellphones running the app? When you download your data, do you get the maps of where you’ve been? Who buys those location details?

Remember when data breach laws were enforced and penalized? Yes, laws are on the books. In California, civil penalties are not to exceed $3,000 per violation. That’s $261 billion for the 87 million personal records lost. Any lawyer want a class action case?

Cause for distress? Many of our lawmakers seem a bit, well, unclear on technology.

And the new phrase for tech giant testimony before Congress? “What the Zuck?”

But life goes on, and Facbook’s value rose by over $3 billion during the course of the week.

Married to Your Business … Partner
From Data Analytics to Marketing Skills: 6 Strategies to Grow Your MSP Business
END_OF_DOCUMENT_TOKEN_TO_BE_REPLACED

LG Gram for Business 17 (2020): Big Reasons to Like It
END_OF_DOCUMENT_TOKEN_TO_BE_REPLACED