ICYMI: Our Channel News Roundup for the Week of April 30th 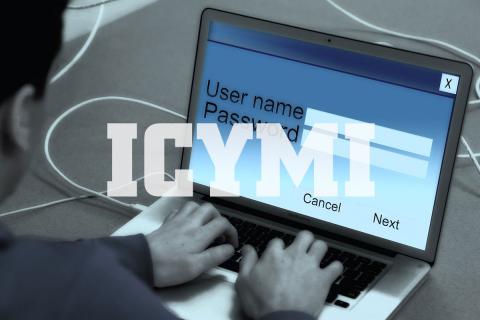 The dish from Dell Technologies World, AI resources from Intel, and a celebration of humanity’s terrible password habits are all among the stories we’ve finally gotten around to telling you about. By James E. Gaskin
Tweet

It’s May, but the snow keeps hanging around, this week falling in a strange place: Spring Mountains National Recreation Area. Why is that strange? It’s less than 40 highway miles from the Las Vegas Strip. Who would have covered the odds on that? Las Vegas, of course.

Speaking of covering the odds, many Dell execs and partners did just that during Dell Technologies World at The Venetian last week. Long way from Michael’s UT dorm room to The Strip, although reports from back in the day say the Dell Dancers regularly brought the house down.

Dishing up some Dell news. Dell EMC storage wants to power up the “Modern Data Center,” using tools like Dell EMC PowerMax enterprise-class storage. Not only is this system loaded with NVMe flash drives, it includes a built-in, real-time machine learning engine and XtremIO All-Flash arrays.

When you say, “get real” are you referring to the way Dell applies artificial intelligence and machine learning technology to its new 14th generation Dell EMC PowerEdge servers and Dell Precision Optimizer 5.0? If so, you probably know that according to research from analyst Enterprise Strategy Group, companies taking advantage of Dell’s new AI and ML tools are 18x more likely to make better and faster data-driven decisions than their competitors. That translates to being 22x more likely to release new products and services faster.

Users need to connect with these new storage and processing systems somehow, so why not the new Dell Wyse 5070 thin client (pictured)? Works with Citrix, Microsoft, and VMware virtual workspaces using Wyse ThinOS or ThinLinux.

Sometimes endpoints are smaller and thinner than thin clients, like in the world of the Internet of Things (IoT). Dell and some corporate friends intro’d a batch of IoT tools in Vegas. The new Just-Us League includes Dell Edge Gateway, VMware Pulse IoT Center, and Microsoft Azure IoT Edge.

Smart systems get smarter with upgraded AI. Intel launched the Intel AI Builders Program this week to get more resources to more partners. What resources? The AI Academy and the Intel AI DevCloud for Builders, for starters.

Developers can also get smarter with the Intel Saffron AI Quality and Maintenance Decision Support Suite, which is chock full of AI software apps.

Small biz folks want to get smarter, too, according to Intuit’s Small Business in the Age of AI research study found. 550 small biz owners and managers hold positive views of AI, 54 percent see opportunity there, and just five percent see AI as a threat. Two-thirds are already using some type of automation technology.

Redmond reports. The wait is over for Microsoft’s Windows 10 April Update. Force the issue by manually going to Windows Update and checking for new updates, or just wait until the update begins during the middle of your presentation to the management committee.

And once you’ve downloaded the new Win10 update, say hello to the Windows 10 IoT Core for use with Visual Studio tools and the Windows Dev Center. Bill G and friends hope you see improvements from the investments they’ve made in AI and ML to help Windows and Azure.

Other products want some love, too:

Not products but still news. Veeam rolled out the red carpet for Dave Russell, the new VP of enterprise strategy and a former distinguished analyst at Gartner.

Scale Computing (hyperconverged solutions) expanded its distribution agreement with Ingram Micro to include the U.S.

Big into headsets and UCC? Then jump on the new Plantronics Partner Program. There are tracks for both resellers and integrators.

Mimecast (email and data security) introduced a new API Alliance partner: LogRhythm. No, not this type of log rhythm.

You may be tired of the GDPR nagging, but many have yet to get the message. Spiceworks surveyed more than 600 IT pros in April (the month before the rules become real on May 25, 2018) across the U.S., U.K., and the EU. Results? Only 19 percent of U.S. techies said they are “informed to extremely informed” about the GDPR and its expected impact on their business. The U.K. boffins came in at 72 percent, and the EU folks hit the 70 percent mark. Not surprisingly, only a third of U.S. techies are in favor of the GDPR, while 75 percent in the U.K. and 70 percent in the EU agree with the rules. However, this survey was done before the Cambridge Analytica news hit the web.

KnowBe4 (security awareness training) released its Top 10 Global Phishing Email Subject Lines clicked upon by the gullible in Q1 2018. Number one? “A delivery attempt was made” at 21 percent. That old chestnut “Change of Password Required Immediately” came in a close second at 20 percent. Because tax season fell during the survey period, “W-2” got 13 percent clicks to open.

And sorry about that last item because it caused four out of five of you some stress. Kaspersky Lab’s The State of Cyber-Stress report found that 81 percent of Americans and 72 percent of Canadians admit to feeling stressed by news of data breaches. This from over 2,000 consumers in North America.

Happy World Password Day! Ready for more stress? This time it’s thanks to World Password Day on May 3rd. Avast Software surveyed 2,002 customers and found only 43 percent used a mix of symbols, numbers, lowercase, and uppercase letters. Sigh. Two-factor authentication is suggested, but we all know how much users love to jump through extra security hoops. Ask them to adopt 2FA, in fact, and they’ll often reply “love you,” but with a different four-letter word in place of “love.”

Maybe this will help improve things. Remember when you talked your users into taking the sticky note with their username and password off their monitor and hiding it under their keyboard? Take the next step and get them to move that sticky note from under the keyboard to inside a drawer or cabinet. Bingo—actionable security improvement.